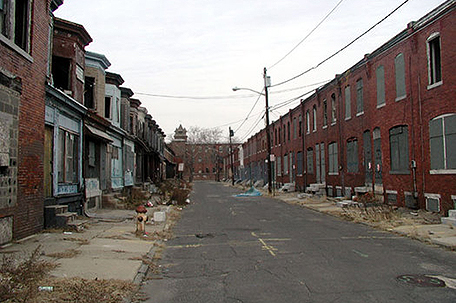 ABOVE PHOTO:  One out of five children in the Philadelphia area lives in deep poverty.  (Phillies1fan777/en.wikipedia)

When Pope Francis visits Philadelphia for the World Meeting of Families later this month, advocates will issue a call to action against hunger.

In preparation for the pope’s visit, politicians, business leaders, community-service providers and those facing food insecurity will held a dinner Thursday, Sept. 10.

Anne Ayella, co-chair of the World Meeting’s Hunger and Homelessness Committee, points out that more than 26 percent of residents of the Philadelphia region live in poverty and thousands of children are threatened with hunger.

“One in five children not only are in poverty, but they’re living in deep poverty, which means their family income is less than half the poverty line,” she says.

Called “The Community Table,” Thursday’s event offered an opportunity for those facing hunger to have a dialogue directly with those in a position to affect change.

While people living in poverty can enroll in the federal Supplemental Nutrition Assistance Program (SNAP), once known as food stamps, to meet basic food needs, many still rely on soup kitchens and food pantries to feed their families.

According to Ayella, the budget impasse in Harrisburg is putting those programs throughout the state at risk.

The World Meeting of Families has started The Francis Fund, named in honor of the pope, and hopes to raise $1.4 million to assist local food pantries, soup kitchens and shelters.