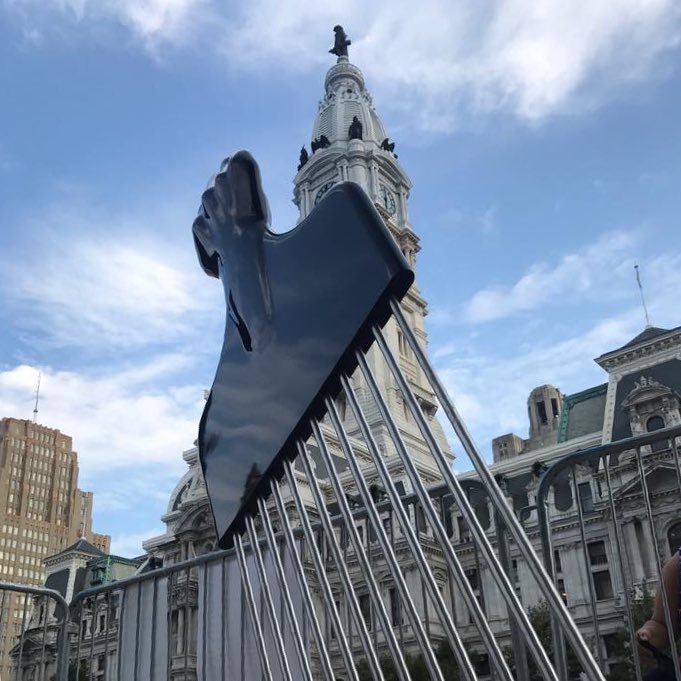 PHILADELPHIA (AP) — A statue of a former Philadelphia mayor and police commissioner that has spurred protests and vandalism from critics who argue that his policies alienated minorities has a new neighbor: a nearly 800-pound Afro pick sculpture.

Mural Arts Philadelphia installed the sculpture , which has a black handle topped by a clenched fist, as part of Monument Lab, an initiative to create public works about issues such as social justice and gentrification.

The pick’s position near the statue of Frank Rizzo has garnered attention in a city that has struggled to reconcile the legacy of a politician known for both presiding over a police department that publicly strip-searched members of groups affiliated with the Black Panthers as well as promoting African-American police officers.

Critics want the Rizzo statue to be torn down, and following a deadly white nationalist rally in Charlottesville, Virginia, the marker was egged and spray-painted with the words “black power.” Rizzo supporters say he was a devoted public servant who wasn’t afraid to speak his mind.

Mayor Jim Kenney, a Democrat, has said it’s the “right time” for a conversation about the statue and the city is taking public suggestions on what to do with the statue of Rizzo, who served as Democratic mayor from 1972 to 1980.

Hank Willis Thomas, the artist who created the pick, said he hopes his temporary installation continues the debate about Rizzo but noted that his sculpture wasn’t created to be an answer to the statue.

“I don’t think my piece is at all in opposition to him,” Thomas said. “It’s sad that people think there needs to be a tit for tat.”

© 2017  The Associated Press. All rights reserved. This material may not be published, broadcast, rewritten or redistributed. Learn more about our Privacy Policy and Terms of Use.