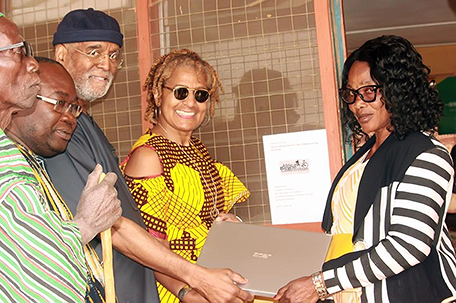 The African Bicycle Contribution Foundation (ABCF), which has distributed 500 free Ghanaian-made bicycles, at predominantly rural schools throughout Ghana since 2016, recently announced a new “Collaboration for IT and Communications Excellence” program at a demonstration project at the Girls Model School, in Nabdam, Ghana, with students, teachers and administrators in attendance.

More than 200 members of the Girls Model School’s Upper East Region community attended the event, which included presentations by Nabdam District leaders, the chairman and president of the Collaboration, A. Bruce Crawley and Patricia Marshall Harris, respectively, performances by the students, themselves, and by local cultural dance troupes.

Among those offering insightful and encouraging remarks to the students was the Hon. Dr. Kurt Mark Nawaane, Member of Parliament, who said that “it has been proven that computers and a knowledge of information technology is important to those who are serious about moving schools and communities forward.”

In her remarks, the Hon. Agnes Anamooh, District Chief Executive, Nabdam, added that the contribution of the computer lab will allow the students to successfully move into 21st century’s “digital age.”

“We are so pleased to be able to launch this new program at the Girls Model School, in Nabdam,” Harris said. “We will work to ensure that students at other rural schools across Ghana are eventually included.”

Ghana’s Nabdam District, bordered on the north by Burkina Faso, and on the east by the Republic of Togo, is the least urbanized district in Ghana. Less than 16 percent of the population resides in urban areas, and about 28.5 percent of adults are classified as illiterate. The purpose of establishing the Girls Model School, in 2015, was to identify and educate needy, but brilliant, girls from the district, who were moving to junior high school.

With the computers, related equipment and large-screen monitor being provided by The Collaboration, the school’s administrators have already begun to carve out space, in its existing facilities, for its first computer lab.

Under its new program, ABCF will continue to raise funds from corporate interests and individuals in the U.S., Africa, and elsewhere. The foundation’s focus, however, will no longer be on providing transportation support to students. Instead, ABCF will reach out to Ghana’s Ministry of Education, the Ghana Education Service, the worldwide private sector, schools, global tech leaders and universities to “Help Ghanaian Students and Entrepreneurs to be leaders in a Tech-Driven Global Economy.”

“As a foundation established by African Americans, we believe our ‘Year of Return’ was actually 2016, when we came to Ghana to purchase and distribute free bamboo bikes to rural under-resourced students,” said the Collaboration’s chairman, A.Bruce Crawley. “We have worked to bring positive outcomes to students across Ghana, since that time. Now, we trust that our funders will support this new and different effort that is designed to further prepare Ghana’s deserving young people for a globally competitive future.”

The Collaboration was recognized by UNICEF in 2011 for having 84 percent of its children in primary school, which the organization claimed was an achievement “far ahead” of its West African neighbors. Despite years of best-in-region budgetary allocations to public education, and its recent introduction of free secondary school, students in Ghana continue to be challenged by a lack of computer access. It is hoped that the efforts the Collaboration is making to bring more computers into Ghana will help those on the ground make a dent in this problem, Crawley said.

The report emphasizes that with the largest youth population in the world and some of the world’s fastest-growing economies, Sub-Saharan countries, including Ghana, will be especially challenged to “build the skills and expertise to drive competitiveness in the future.”

Many have said that the demand for a more technology-focused primary education, for example, will require that digital skills be considered, across the board, as equally important to reading and math.

In that regard, Maxwell Peprah Opoku, a respected university scholar has found that 96.1 percent of students in Ghana’s Ashanti Region, the most heavily populated of all Ghana’s Regions, do not have access to labs for practical training in ICT.

The IFC report goes on to say that more than 9 million jobs in Ghana will require digital skills by 2030. The foundation’s program hopes to play a role in helping to facilitate this transition, in Ghana, through corporate fundraising in the U.S., other nations, and across Africa; the provision of digitally critical computers, communications and other equipment; seminars for teachers, students and entrepreneurs; and published research on the topic over the projectable future.