African American Museum in Philadelphia: Celebrating our past, embracing the future 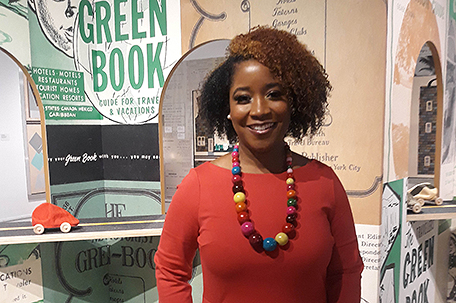 “What drives my passion is the fact that I love African American history and culture.” — Dr. Ashley Jordan

Dr. Ashley Jordan, the new president and CEO of the African American Museum in Philadelphia (AAMP), has a sharp vision for the institution’s future.

Jordan, who has a doctorate in United States history from Howard University and bachelor’s degree from Kent State University in history with a minor in political science, most recently worked at the National Underground Railroad Freedom Center in Cincinnati as senior director of development before being recruited to Philadelphia to lead the museum.

Jordan is determined to keep the African American Museum in Philadelphia in demand as a must-visit national and international destination.

“I know there’s options to go to the new museum there on the mall [Smithsonian National Museum of African American History & Culture in Washington DC],” she said. “There’s a new music museum in Nashville that’s been built dedicated to African American history through music.”

“We’re excited about making sure that we are in those conversations,” Jordan added, referring to keeping AAMP as a must-see tourist destination when visiting Philadelphia.

Although the museum is open and has in person exhibits, it is still capitalizing and engaging the online audience gained through the pandemic.

“We have made our changes via technology. The pandemic has caused a lot of institutions to rethink the way in which we communicate our messages. “We’re just happy that our site has been able to make that pivot so that we can stay connected to our audience members,” said Jordan, noting that the museum’s audience reach has grown nationally and internationally due to technology.

“We’re happy about the opportunity that even though you can’t visit us physically, you can visit us from the comforts of your home,” she added. “But I think the one thing that will attract people to come to our site is our work in talking about freedom. We have different relics that speak to freedom throughout history from colonial times to present day, and I think it would definitely inspire others to champion their own stories for freedom.”

“We’re not going about the business as usual as it relates to museums. We’re looking to make some transformative impact in our community,” said Jordan, who will be announcing new key internal positions at the museum soon.

Jordan also wants to expand visitors’ perception that the museum is a place that solely collects items.

“We are a place where history happens,” she said.

One of the ways Jordan is boosting the profile of the museum is through it’s “triple E plan” — education, engagement and expansion.

“We want to create a robust calendar of events geared towards our programs as well as our exhibitions that get people talking about history,” she said. “We want to stress within our new aims for mission and programming that we are sites of change and a site for education, a site for public trust.”

Currently the museum is featuring “Derrick Adams: Sanctuary,” which will be on display through August 28, 2022. The exhibition consists of approximately 50 pieces of mixed-media collage, assemblage on wood panels, and sculpture presented in an installation designed by the artist that reimagines safe destinations for the Black American traveler during the mid-twentieth century.

The exhibit is inspired by “The Negro Motorist Green Book,” an annual guidebook for Black American travelers published by New York postal worker Victor Hugo Green from 1936 to 1967 during the Jim Crow Era in America.

The iconic Green Book provided a list of hotels, restaurants, barbershops and beauty parlors, taverns, and more where African American travelers were welcomed during segregation. The exhibit continues Adams’ examination of leisure for Black Americans throughout history and the challenges in creating safe spaces and refuge for them.

Additional in person exhibitions on display include “Taking Care: Recent Acquisitions & Conservation,” which features works of art accessioned into the AAMP collection since late 2019, and “Black Citizenship in the Age of Jim Crow.”

The museum also has online exhibitions such as “Anna Russell Jones: The Art of Design,” which highlights the diverse treasures of AAMP’s permanent collection.

Anna Russell Jones (1902-1995), was the first African American graduate of the Philadelphia School of Design for Women, now Moore College of Art and Design.

“Rendering Justice,” also part of the museum’s online exhibitions and curated by artist Jesse Krimes, showcases an examination of mass incarceration and a depiction of contemporary America. The artworks are part of Mural Arts Philadelphia’s Reimagining Reentry program, which supports formerly incarcerated artists in the creation of public art projects.

AAMP also partners with institutions to display exhibitions by local artists, such as partnering with Einstein Health to display an exhibit by local printmaker Gilberto Wilson at Albert Einstein Medical Center, and partnering with The Pennsylvania Academy of the Fine Arts for an upcoming exhibition displaying the works of Temple painting professor Mark Thomas Gibson.

The African American Museum in Philadelphia is located at 7th and Arch Sts. in Philadelphia, PA. Museum hours are Thursdays through Sundays 10 a.m. to 5 p.m. Admission ranges from $10 to $14. Museum members are free. To learn more about all exhibits and programming visit aampmuseum.org for more information.