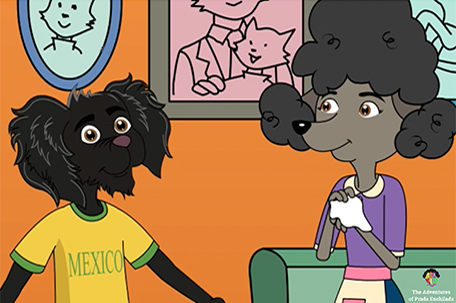 ABOVE PHOTO:  A clip from “The Adventures of Prada Enchilada”

Clark hopes that as the first African-American creator to develop an educational children’s animation series, he can successfully to pitch it to both major children’s TV networks and Video On Demand (VOD) platforms.

When the late African-American cartoonist Morrie Turner’s cartoon strip “Wee Pals” – the first syndicated strip to feature ethnic and racial diversity – was developed into an animated series by ABC called “Kid Power”, it was an historic event. It set the stage for future animators who sought to explore diverse storylines and characters.

Other programs like “Fat Albert”, “Little Bill and others followed, but basically followed the same morality and ethical problem-solving skills formula, as do most cartoon series of that nature.

Although these skills are extremely important when it comes to personal development, Davon Clark, 33, noticed something missing – an educational component based on a style of teaching of the basic skill sets that oftentimes children who learn differently or respond better to — one which includes more tactile, hands on, and visual elements.

Growing up, he fell into that category, so he understands the struggle of trying to stay engaged in a traditional classroom setting. He noted that now, in the tech age with all of its bells, whistles and interactions aimed at younger and younger audiences, it is has become a problem for not only children who respond better to hands on learning methods, but most children by the time they enter formal education.

As a young educator and author, working largely with African-American youth, he realized that this was the case with many of the kids he works with through his education based, multimedia company ADC Kid — short for “A Davon Clark Kid” — which he founded in 2015. 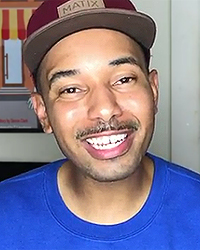 ADC Kid is dedicated to the advancement of empowerment and enlightenment through interactive literacy through storytelling performances, expressive writing, animation and books. They offer educational services to schools, local/corporate businesses, summer camp programs, non-profit organizations and more throughout the NJ/PA/DE Tri-state area.

In the process of working with the children and searching for innovative ways to motivate them, Clark noted the lack of people of color in the animation field — especially when it comes to series development and mass marketing. Based upon what he has learned over the years and feedback he has received, Clark has decided to take his interactive book series, “The Adventures of Prada Enchilada,” to the next level.

In short, Clark’s long-term goal is to become the first “Black Disney.” He does not want to copy Disney, but would like to build an empire like he did. During his research, he  also discovered that there are few animation training programs offered outside of the college classroom, so another goal is to build a Tyler Perry style production studio in Camden that would offer animation classes, apprenticeships and jobs to the community.

The series features a dog (Prada Enchilada) and cat (Mimi Tortellini) who live on Endless Lane, due to the fact that every learning adventure they set out upon is “endless.” The characters embark on various missions helping children identify objects, learn fun facts, and utilize basic math.

“This mission is groundbreaking,” Clark said. “It not only aims to be the first educational children’s animation created by an African-American to be pitched to a major TV network or Video on Demand (VOD) platform, but it will include actors of color in the two lead roles. We are also looking for animators to help with the project.”

ADC Kid’s launched a campaign in October on Seed & Spark’s crowdfunding platform. They are seeking to raise a total of $25,000 for development and production by November 21.

To donate to the project, visit: https://www.seedandspark.com/fund/the-adventures-of-prada-enchilada-childrens-animation-series .  For more information about the organization itself, visit: www.adckid.com. They can also be found on Facebook at: www.facebook.com/adckid, on Instagram at: @adckid and on Twitter at: @adc_kid.