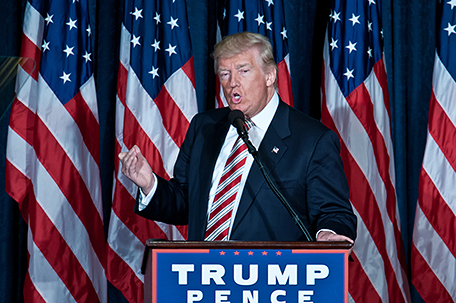 After largely avoiding the City of Philadelphia in favor of its more friendly suburban climes, Republican Presidential Candidate Donald Trump made two visits to the city to talk to two distinctly different groups.

No one in the City of Philadelphia would confuse The View Banquet Hall and the Union League.

The Union League, located on South Broad Street near such venues as the Kimmel Center and the Academy of Music, is one of the nation’s oldest private clubs. President Abraham Lincoln created the club during the Civil War to give Union soldiers and officers a place go to relax and plan strategy.

The View, on the other hand, is located on North Broad Street, a block away from the Greater Exodus Baptist Church, which owns it. The neighborhood surrounding it includes Jimmy G’s Steaks, a Produce Junction, a check-cashing place, and, occasionally, a homeless person sleeping nearby.

Republican Presidential candidate Donald Trump paid a visit to both areas during visits the real estate magnate made to the Philadelphia over the Labor Day weekend. On Friday, he had lunch with a group of people gathered by the Pennsylvania Republican Party.

While the crowds at both venues were similar in some ways, the reactions outside both venues were decidedly different. Outside the Union League, there appeared to be no protestors, while in North Philadelphia, protestors made their presence felt.

In a speech that combined nationalism and the doctrine of peace through military strength, Trump promised to make America a stronger nation militarily by increasing the number of soldiers, weapons and other military accoutrement.

Branding his opponent, Democratic Presidential candidate Hillary Clinton, as “reckless”, “trigger happy” and “unstable” because of conflicts that have been going on in Syria and other places in the Middle East, Trump vowed to make sure that America gets the respect it deserves by having the most impressive military might.

“President Obama and Hillary Clinton have overseen deep cuts in our military, which only invite more aggression from our adversaries,” Trump said. “Our military is so depleted. Our adversaries are chomping at the bit.”

To keep our adversaries at bay, Trump proposed a plan that would dramatically increase the number of people in the Army, Navy, Air Force and Marines and the number of aircraft carriers, tanks and other military equipment. The idea, he said, is to leave no doubt that the American military is the most potent fighting force in the world.

While much of his emphasis was on old-school warfare, Trump also talked about fighting new American threats, like the threat of cyberterrorism. He considers it one of the few things that Americans can learn from his “clueless” opponent.

“Hillary Clinton has taught us really how vulnerable we are in cyberhacking,” he said. “It’s probably the only thing that we’ve learned from Hillary Clinton.”

He’s also promised to make sure that NATO, a group that’s already kind of anxious about the possibility of his becoming president, pay for “the protection we provide” should he become president, Trump said. That they don’t right now is a sign of disrespect. 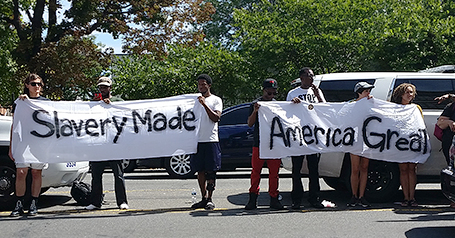 “They’re supposed to pay 2 percent of [Gross Domestic Product] for defense,” he said. “We’re going to make sure they do it. They want to do it.”

But as it is with most things, the devil is in the details of paying for it. A big part of why the military has been scaled back is because of the Sequester. The Sequester was a cap placed on military spending during the 2011 Debt Ceiling battle.

Trump pledged to solve this problem.

“As soon as I take office, I will ask Congress to fully eliminate the defense sequester and will submit a new budget to rebuild our military,” he said, without giving any indication how he’d do this.

Another thing that Trump promised to do is to solve the problem of ISIS. If he becomes president, he vows to bring in a group of generals and tell them that they have 30 days to put together a plan designed to wipe the terrorist group off of the map, he said.

While many current and retired military generals have denounced the plan as unrealistic, to the generals at the Union League, it isn’t.

“I do not agree with that assessment,” said Ret. Gen. Gary Harold. ”If the commander-in-chief says that this is a priority, the active duty military is going to make sure it happens. We’re not going to be starting from scratch. There are already some plans that are on the books I guarantee you, that need to be brushed up.

“He’s going to get the smart people on his team to come out, put together the plan, and execute the plan,” said Ret. Gen. Remo Butler “That’s what good leaders do.”

To end his speech to the Union League, Trump promised to bridge the racial, and religious divides in America that some have argued he’s largely capitalized on throughout his campaign.

We will be one America,” Trump said, “Uniting under one God, saluting one American Flag!”

But that unity might be a little hard for Trump to come by, says community activist Malcolm Kenyatta. Saying some of the things that Trump has said about people of color makes his newfound attempts to get them to vote for him difficult if not impossible.

“I’ve worked on political campaigns of all kinds,” he said. “But I don’t know of any elected official that’s ever said ‘Let’s go to a group, attack them, tell them how horrible they are and how everything sucks, and then ask them for their vote! We’re a diverse nation, we all care about the same things and we want a country that reflects our values. [Donald] Trump is the antithesis of that.”

After beginning his presidential campaign by calling Mexicans “rapists and murderers” and asking Blacks “What Have You Got To Lose?!” by voting for him because their neighborhoods were deadly, their schools were bad, and they had the kind of unemployment levels not seen since the Depression, Blacks, Latinos and others are casting a wary eye toward the Republican Presidential candidate.

In fact, the people that greeted him when he came to North Philadelphia on Friday were antagonistic to say the least.

As he stood in front of The View watching the police and protestors interacting as they waited for Trump to arrive, Derwin Ridley could barely hide his disgust.

While Trump may be able to get some in Philadelphia’s Black community to give him a listen, Ridley, a longtime North Philadelphia resident, said no thanks.

“This is a sad day,” he said. “It’s a very sad moment. We know what Trump is about. He’s just here for a photo-op…to take some pictures with some African Americans. I wouldn’t have invited him.”

Greater Exodus Baptist Church operates The View as part of a series of non-profit entities it owns including a daycare center and a charter school. Since the Rev. Herb Lusk, a former Philadelphia Eagles player and longtime Republican activist, is the pastor of the church, it was assumed by many in the crowd that Lusk had invited Trump to visit.

Church officials took great pains to distance themselves from the event. An official who spoke under condition of anonymity called Trump’s appearance “a business arrangement” and said that anyone, including Democratic Presidential candidate Hillary Clinton, could rent the hall for an event if they wished. Lusk himself was out of town and told “Philadelphia Magazine” that he wasn’t invited, nor was he supporting Trump.

When Ridley was told that Greater Exodus had nothing to do with Trump’s appearance, he was relieved.

But that said, not all money is good money.

“They didn’t even have to rent the hall!” Ridley said.

Trump sat down with 15 people picked by the State Republican party for a power lunch at The View. Included in the group were: Deputy Chair Republican National Committee chair Renee’ Amoore, Ryan Sanders, director of African American Inclusion for the Pennsylvania Republican Party, James Jones, who is running against State Rep. Dwight Evans for the Second District congressional seat vacated by Chaka Fattah, the Rev. Deborah Williams, who is running against Rep. Bob Brady for the First District seat he currently holds, and Malik Boyd, host of WWDB’s “Heart of the City” radio program.

One of the things that Trump talked about when he asked Blacks, “What have you got to lose?!” was the crime in America’s streets, including a section where he contended that the streets of America’s cities were so crime ridden that walking down the street could get you killed.

While he didn’t go that far, Jones agreed somewhat and said that his intention was to talk to Trump about ways to help.

“I have some major issues,” Jones said. “I need for him to buy into my program, which will create 5,000 jobs and will address the violence, crime and poverty. I also want him to talk about education and what his plans are for that…” 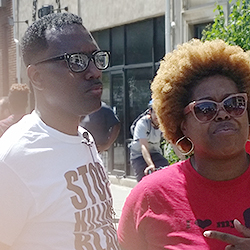 While the lunch meeting was going on inside, protestors were voicing their disdain outside. Asa Khalif, a leader in Philadelphia’s Black Lives Matter movement, condemned the meeting and the people who were in attendance.

“Donald Trump is dangerous for America, dangerous for Black and brown people, and dangerous for poor people,” Khalif said. “[Trump] has absolutely no conscience whatsoever, so we have to stand in unison. What disturbs me the most is that these Negro preachers, whose time has been gone, are meeting with this man. You know, Jesus was sold out for 30 pieces of silver by his comrade. These guys are meeting with a racist bigot is a space that is supposed to be secure for Black and brown people associated with the church.”

“I think it’s an absolute disgrace,” Khalif continued. “I think they need to be ‘beaten with many stripes’ – since they want to be all Biblical. You [the leaders] sold out your own generation, and now you’re selling out our generation and the young. I think it’s a damn disgrace, and that brings more tears to my eyes than Donald Trump coming to Philadelphia.”

Following the meeting, those in attendance were met by angry protesters. Chanting “Shame on you!” and “Sellout!” did not hold back their feelings about the fact that these people gave Trump some of their time.

Jones talked to reporters about the meeting. While Trump didn’t get into specifics, he was happy that he got the chance to talk with the man he hopes is the nation’s next president.

“We didn’t get into too many specifics,” he said. “It was broad strokes because we didn’t have time to talk about all of his policies. But it wasn’t just a photo-op. It was a productive meeting.”

Trump campaign officials say he’ll be spending more time in the Philadelphia area before the election. Pennsylvania is considered one of the more hotly contested states in this year’s elections and a Republican hasn’t won it since 1988.