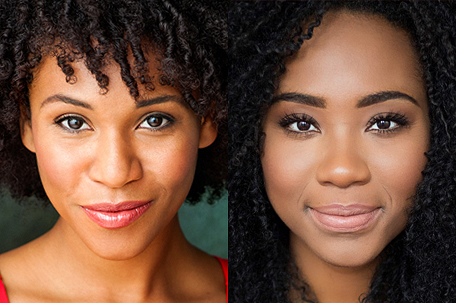 The brilliant writer Alice Walker introduced the world to her Pulitzer Prize- winning novel, “The Color Purple” in 1982. A short three years later, Steven Spielberg directed an incredibly dynamic star-studded cast including; Oprah Winfrey, Whoopi Goldberg, Danny Glover, and Margaret Avery in the 1985 film adaptation.  The movie marked Whoopi Goldberg’s film debut, earned the cast several Oscar nominations. The film was adapted again in 2005 for Broadway. Much like the novel and the film, the story and characters of “The Color Purple” continue to resonate with audiences the world over.

The Tony Award-winning, Broadway production is currently on a national tour. Under the leadership of  director John Doyle, Adrianna Hicks and N’Jameh Camara join the talented cast of “The Color Purple” national tour as Celie and Nettie respectively. Hicks and Camara took time to speak about sisterhood and what playing the iconic roles taught them respectively.

“The Color Purple” centers on Celie in various phases of her life as a sister, wife, and mother, she experiences abuse in various forms, as she navigates her journey to self-love and acceptance. Hicks was first introduced to the Broadway show during her junior year of high school. Years later, she became a swing in the Broadway production in 2016. Hicks shared how her initial role as swing, led to landing the role of Celie.

“I didn’t have to audition for Celie, because I did it on Broadway,” Hicks said,“I got to cover Celie plus six other roles. I played seven of the nine girls in the show. It was just a blessing for them to call me and say, we want to offer you the part. I’m really honored to play her!”

Camara’s introduction to “The Color Purple” on Broadway mirrors Hicks’s, in that she too was introduced to the story during her high school years.

“Back in 2008, I saw the original Broadway production tour when I came to Chicago,” Camara said. “That was the first professional musical that I had ever seen. So now 10 years later, the second to last stop of the tour will be in Chicago. I’ll get to perform and hopefully inspire some other folks, and see the faces of people at their first show. Timing is so amazing!”

The full-circle moments each actress experienced resulted in an even deeper appreciation for the beloved women they play. Hicks spoke openly about the aspects of Celie that she admires most.

“The thing that I honor and love the most about Celie, is that it took her life in order to journey into who she is,”Hicks said. “She started out one way, and she ended in a totally different way and that’s how it should be. It’s not about arriving or being this perfect person from the very beginning, it’s about growth.”

“I know that I’m telling the story of someone that’s in the audience,” Hicks continued. “That reminds me that it’s so much bigger than me trying to show that I’m playing Celie… it’s like no, you’re actually representing someone that’s sitting there. That’s the beauty about how the story is written. I’ve taken a lot away from that, and I’ve learned a lot from her.”

Camara offered the aspects of Nettie’s character that are the most compelling to her.

“What resonates the most about Nettie with me, is that she is in active pursuit of knowledge and figuring out what she wants to contribute to the world,” Camara said. “She dreams big, and her number one concern is not having to be a mother, or be a wife, it really is not about having a role related to a man at all. I also love that ultimately she has an immigrant experience, she ends up going to Africa. I just think about no matter where you are in the world, just having a hunger for what you want. Nettie shows that… she travels with her dream which is what I’m doing right now!”

Who can forget the song that Celie and Nettie sang to each other about letting nothing separate them? The bond of sisterhood is an undeniable one, and the relationship between Celie and Nettie is on the forefront of “The Color Purple’s” story.

“I believe that the relationship between Celie and Nettie is a very strong one and it’s authentic…” Hicks said, “It is genuine love for a sister. I have a wonderful friend and colleague in N’Jameh Camara, who’s playing Nettie. It’s been an amazing journey to have someone that’s connected and present in the moment. It’s been great to develop the chemistry as time continues to progress on the tour. Now that I’m stepping into the role 100 percent  I’m able to fully explore even more of that divine connection between sisters… it’s a strong bond that’s really unbreakable.”

“What I have come to really love, is that Adriana and I have developed an intimacy on stage by being truthful,” Camara said. “In sisterhood, there is a sense of intimacy that no one else understands. When I get to look into Adrianna’s eyes every night, when we speak authenticity, which is what the audience is looking for… that develops another layer of gratitude, play, surprise, and angst within us that ultimately serves and translates into our characters.”

“The Color Purple” is known for its phenomenal music. Declarative statements of affirmation in the musical number “I’m Here”, as well as the vulnerability of Camara’s favorite number, “Too Beautiful for Words,” connect with audiences in ways that are unforgettable. The themes of “The Color Purple” are layered and pair brilliantly to evoke emotion on a profound level.

“At the end of the day, it’s always good to be reminded that the essence of you is more than enough!” Hicks said. “It truly is all you need. What you have to bring is sufficient for you, and sufficient for the people that are watching. That’s very human and we all need to get back to that.”

Camara would like the audience to hold onto the idea that people are more alike than we are different and at the core of what it means to be human, we all just want to be loved. We want to be acknowledged, we want to have a voice, and we want to be affirmed.

”This show is not just a  ‘Black show’ or a  ‘Blacks only’ narrative,” she said. “It’s a holistic, humanistic narrative. Alice Walker gives different intersectional points on what it means to be a woman —  a Black woman… to be a young, old, skinny, or a big woman. This story acknowledges that each and everyone of us is here, and that we are enough.”

The women performing in this show are certainly more than enough! Follow Adrianna Hicks @missadriannahicks on ig and N’Jameh Camara @lady_njay to stay involved with their journeys.  “The Color Purple” will be at The Forrest Theatre in Philadelphia from December 12-17th. Visit www.kimmelcenter.org for more information on tickets and showtimes.

A lunchtime conversation with the cast of The Color Purple