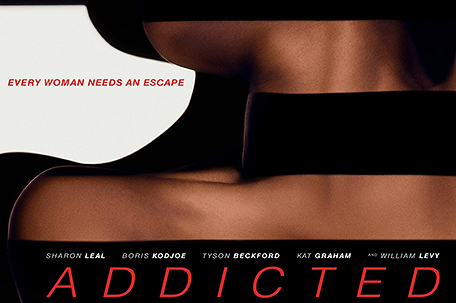 Zoe Reynard (Sharon Leal) has a life straight out of a WAK painting: a lovely marriage to high school sweetheart and drop dead gorgeous husband Jason Reynard (Boris Kodjoe), two precious children, a supportive Mama (Maria Howell) who looks as if she actually could have birthed the protagonist, and a successful career as a gallerista.  Yet there is something lingering under the surface, an itch she just can’t seem to scratch and try as she might, her struggle begins to bleed out into other outlets of her life.

Soon enough, she finds herself recanting her story to therapist Dr. Marcella Spencer (Tasha Smith) who tries to get Zoe to go deeper into her issues with intimacy and sex.  These sessions seem to help, but Zoe continues to seek lust, which could potentially lead to life as she knows it falling apart.

Based on bestselling novel by Zane, director Billie Woodruff (Beauty Shop) attempts to create drama and passion in the highly anticipated Addicted.  Women of all types came out to support the extremely sexy advanced live screening on October 9th, which afterward featured a Q&A session of cast members and special performance by featured artist Estelle.

This film is another instance in which audience members should just choose the book.  There was a lot of exaggerated overacting, the dialogue was stiff and unconvincing, and some of the selected camera angles were a bit awkward.  The best things in the film were Zoe’s best friend and hard working employee Brina (Emayatzy Corinealdi), Zoe’s mother (Howell), and William Levy speaking in his native Spanish tongue (more por favor!), and the ‘twist.’  For a film debut, Zane fell short with the screenwriters on this one.

If you are a die-hard Zane fan, sexy-man-lover, or a supporter of all things black, go see this film and tell me what you think as I really would be interested in the feedback.  No need to take my word for it, but Addicted could use an intervention.