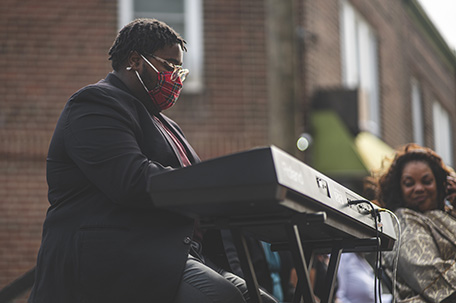 Despite the forecast of rain for late Saturday afternoon, the sun continued to beam on a long-awaited day — Saturday, October 16, 2021 — when a portion of Germantown Avenue was renamed J. Whyatt Mondesire Way in honor of  the late Philadelphia Sunday SUN publisher and former Philadelphia NAACP president, ensuring that his legacy lives on.

During Mondesire’s many years as serving as president of the NAACP Philadelphia Branch, he loved the NAACP ACT-SO (Afro-Academic Cultural Technological and Scientific Olympics (of the mind), so it was appropriate to have two of the ACT-SO alumni to give homage to him during the ceremony.

Mondesire believed that when you are a part of the ACT-SO program, success follows, because the foundation has been laid.  He was the program’s greatest promoter, having numerous ACT-SO youths perform yearly at the NAACP Annual Freedom Gala fundraiser.

Hankerson, 20, is presently a junior at Eastern University majoring in music education. He has been playing for over 10 years. Hankerson also plays drums, accordion, and many more instruments with the Philadelphia Mummers Avalon String Band. In addition, he placed locally  in Philly ACT-SO Gold in both Instrumental/Classical and Contemporary categories, which gave him the wonderful opportunity to go to San Antonio, Texas for the national competition; all expenses were paid by the NAACP Philadelphia Branch and NAACP Philly ACT-SO Committee through fundraising and donations.

Jhayda Washington, another featured ACT-SO alumna at the event, sang, “His Eye is on the Sparrow.”  Washington is a gifted 22-year-old raised by her father and grandmother in the Logan community. Her talents include singing, dancing, and acting. During her high school years, she competed for three years locally in the NAACP Philly ACT-SO competition receiving Gold locally in the Vocal Contemporary categories and Classical.

In June 2021, Washington graduated from Clarion University with a bachelor’s degree in Communications with a concentration in digital media. She served her duty as Miss Clarion University in 2017.As Jerry’s son, Joseph Mondesire, stood up and spoke so passionately, pouring out heartfelt love for  his family and his father, he exhibited a profound sense of pride.

Words cannot describe the unity experienced by people from all over the City of Philadelphia — some even traveling from North Carolina — for the occasion.

We can only give the credit due to Madam President Catherine Hicks — the second woman of color to be the President of the NAACP Philadelphia Branch — who spoke about how Jerry continues to be deeply missed and his legacy as she knew it. The audience applauded as Hicks promised the best leadership she could provide, along with her executive officers and the NAACP committees, to the community.

Words written by Bishop J. Louis Felton, senior pastor of Mount Airy Church of God in Christ and 1st vice president of the NAACP Philadelphia Branch were shared with the audience and very well received.

The scheduled attendees on the program spoke briefly, but with conviction of their love and respect for Mondesire.

Councilmember Cindy Bass gave brief shout-outs to a few folks who had covered Mondesire over his lifetime, like the late E. Steven Collins, radio host and activist, and the late photographer Robert Mendelsohn.

As the ceremony was coming to a close, and what everyone was waiting for, the City of Philadelphia City Council Citation was read by Councilmember Cindy Bass. Afterwards the balloons were released, and  released a stream of emotions throughout the crowd as the balloons continued to fade into the beautiful sky.

Jerome Whyatt Mondesire will always be remembered as a great mentor, a good father, and an excellent leader.  As he expressed in his own words about the mission of the NAACP to support voting in 2009, “While we the NAACP do not endorse candidates, we want to assure our supporters and friends that our branch – one of the largest in the nation – will continue to focus on the issues and concerns critical to choosing leaders capable of addressing the contemporary challenges.”

How appropriate as we approach our upcoming election on November 2. PLEASE VOTE!

Special Announcement: Mondesire To Be Honored With Street Name