A Woman In Full 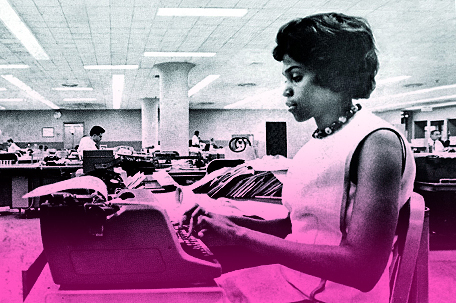 In a talk held at the African American Museum of Philadelphia, Dorothy Butler Gilliam showcased her new memoir and the historical career that led to it.

In 1961, seven years before the 1968 Kerner Commission Report detailed the need for more diverse newsrooms, Dorothy Butler Gilliam began her career at the “Washington Post.”

When she came from the newspaper’s city desk after a career in the Black press, she knew there were stories from her community out there just waiting to be told.

So she made it a point to go out and tell them.

“People in the Black community were my sources,” she said. “I was reaching out to try to broaden the knowledge of a larger audience about who we were and about what we had contributed to this society, and how important it was that we, as African-Americans, saw images of ourselves, in the newspapers, in television.” I was trying to bring a wider knowledge of our contributions to the world.”

Gilliam’s fight to enlighten Washington in particular and America in general about the role that African-Americans have played in the country and by extension the world is the subject of her new memoir, “Trailblazer: A Pioneering Journalist’s Fight To Make The Media Look More Like America”.

At an event sponsored by Philadelphia Media Networks at the African American Museum in Philadelphia, “Philadelphia Daily News” columnist Jenice Armstrong moderated a Q and A with Gilliam, and recalled listening to her parents discuss the news of the day using Gilliam’s columns as a springboard.

“Dorothy Butler Gilliam was an institution in D.C.,” Armstrong said.

When she began her career on the City Desk at the Post in 1961, Gilliam, who went on to become a columnist during her decades-long career at the newspaper, was one of only a few women working in the mainstream press outside of the so-called “women’s section” because at that time, women were only expected to stay in the newsroom long enough to get married and hear the clanging of their biological clocks, she said.

But while being a woman was a challenge in the newsroom, being a Black woman was even more daunting, Gilliam said. At a time before Uber and Lyft, it was tough for her to get to assignments quickly because cab drivers in the nation’s capital refused to pick up Blacks, she said.

While ingenuity, and her ability to use shorthand, kept her from missing deadlines, the fact that this was the reality gave her pause, Gilliam said.

“I think the fact that this was happening in the capital of the United States of America is really so important for us to remember, because John F. Kennedy was in the White House,” she said. “He was beginning to talk about some of these issues as moral issues. The issue of poverty was a moral issue, the issue of race was a moral issue. These were bigger, deeper issues, I think, than most Americans had thought about at that point.”

When the floor was opened to questions, Gilliam was asked about the concept of “diversity fatigue.”

As president of the National Association of Black Journalists, Gilliam pushed and prodded the media industry to hire more journalists of color and by creating the Young Journalists Development Program at the Post and the Prime Movers program, which was run by late NABJ founder Acel Moore here in Philadelphia.

Because of the current political climate, newsroom diversity has never been more important, she said.

For newspapers, that becomes especially important at a time when the president of the United States is referring to the members of the media as “enemies of the state.” According to the American Society Of Newspaper Editors, the governing body for newspapers around the country, only 17 percent of the nation’s newsrooms have minority representation. When you look at leadership positions in newsrooms, editors and the like, that number goes down to 13.4 percent.

Allowing “diversity fatigue” to become the narrative will be detrimental to people from traditionally marginalized communities, Gilliam said. There are too many important questions to be asked that won’t be if it does, she said.

“We can’t afford that,” she said. “There is so much injustice out there. When you have an African-American community that’s 13 percent of the population, but 50 percent of the population in jails, that’s a subject that needs probing. We also need to look at White supremacy and the ways that anti-Blackness is woven into that. We need to look at privilege. And poverty rates.”

“There’s fatigue because some of these subjects are tough,” Gilliam continued. “But we need to dive into them.”

But now more than ever, we shouldn’t take the work that reporters do to keep us abreast of what’s going on in the world [for granted], because it’s never been more important, Gilliam said.

You can find “Trailblazer: A Pioneering Journalist’s Fight To Make The Media Look More Like America” at your local bookstore.

Newsrooms continue to cut black journalists from their ranks