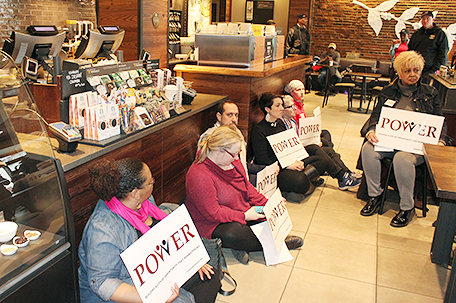 Thanks to the arrest of two Black men for #WaitingWhileBlack at its 18th and Spruce store in Rittenhouse Square, everyone from Starbucks officials to Police Commissioner Richard Ross has had a tough week.

Philadelphia Police Commissioner Richard Ross apologized to the two young men arrested at a Starbucks on Rittenhouse Square and promised to put together a policy to keep something like this from happening in the future.

At a news conference on Thursday, the city’s head law enforcement officer took himself to task for his vigorous defense of the actions of his officers in arresting Rashon Nelson and Donte Robinson, both 23, at the Starbucks on 18th and Spruce on April 12. District Attorney Larry Krasner declined to indict the two men.

The former manager of the Starbucks, Holly Hylton, had called the police to have them removed for not buying anything and refusing to leave. In the viral video detailing the incident, the men, surrounded by six officers, were taken peacefully into custody while White patrons, including Andrew Yaffe, the businessman the two entrepreneurs were there to meet, complained vehemently.

He should have chosen his words more carefully, Ross recognized.

“I should have said the officers acted within the scope of the law, and not that they didn’t do anything wrong,” he said. “Words are very important.”

Ross, who had initially defended the actions of his officers in a Facebook Live video he made last weekend, acknowledged that much of that defense stemmed from an ignorance of Starbucks culture. He also said that the responding officers weren’t there to intimidate anyone.

That said Ross knows he’s got a pretty sizable repair job on his hands.

“I just think that as we work to make this city safer and better we do have to acknowledge that there are still things that we need to work on,” Ross said “It starts at the top and that starts with me. Messaging is important and I failed miserably in this regard.”

But he wasn’t the only one whose failures took center stage.

Starbucks founder Howard Schwartz, CEO Kevin Johnson and COO Rosalind Brewer came to Philadelphia on Monday to meet with city officials, community activists and journalists to talk about the situation and ways to defuse the tensions that had led to sit-ins and other protests since the tape of Nelson and Robinson’s arrest surfaced late last Thursday.

To say that city residents were brutally honest with the group would be an understatement.

In fact, by Wednesday, much of the group found itself in church.

At the behest of the community group POWER (People Organized to Witness, Empower and Rebuild), and its allies including Juntos, the Philadelphia Chapter of the National Action Network and the Guardian Civic League, came to the Mother Bethel AME Church to talk about ways to improve the situation both short and long-term.

While the company announced that it would hold a corporation-wide in-service on implicit bias and racism for it’s 8,000 stores on May 29, the 40 community group members told Schwartz and Johnson that it needs to do more, and that they were willing to help.

The company’s willingness to go further was a welcome change.

“It was a powerful meeting and it left us cautiously optimistic that there is a commitment to do more than a half-day training,” said the Rev. Mark Tyler, co-chair of POWER’s Clergy Caucus. “As my mother says though, the proof is in the pudding.”

POWER had done a series of sit-ins at several of the city’s Starbucks on Monday afternoon, which led to Wednesday’s meeting. The first sit-in was held at the 18th and Spruce location and interrupted a press conference held by Councilman Kenyatta Johnson, whose district includes the coffee shop.

“I’m not sold,” he said of the promises made by the Starbucks officials. “I want to see what kinds of actions they take at the end of the day.”

It had been a long few days for the workers at the 18th and Spruce Starbucks as protestors took over the space at various times on since the arrests last Thursday.