A Tradition of Service: the Pennsylvania Convention Center by Charles Cushing 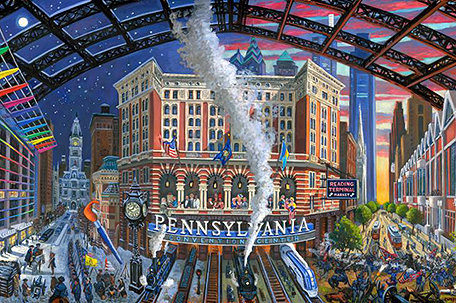 The Pennsylvania Convention Center has installed the final piece of artwork in its West Wing Art Collection, a commissioned oil on canvas by artist Charles Cushing that honors the tradition of service of Pennsylvanians through American history , while demonstrating the important role the facility plays in the fabric of the City of Philadelphia.

“A Tradition of Service: the Pennsylvania Convention Center,” by Philadelphia artist Charles Cushing, is a colorful canvas that measures 6-foot-tall by 10-foot long. The commissioned piece was installed on the center’s first floor and it is visible to passersby near 13th and Arch Streets.  The center’s art collection in the facility’s expansion, combined with the art in the original structure, is now valued at more than $3.5 million.

“The Pennsylvania Convention Center is largely known as a venue for major shows, conventions, and meetings, but our facility is also home to an incredible, diverse art collection that showcases the talents of many Pennsylvania artists from across the state,” said Gregory J. Fox, Esq., chair of the Pennsylvania Convention Center Authority’s board of  directors. “The artwork in our facility is among the finest of any convention center in the country. It helps to set us apart from other venues and gives us yet another selling point when seeking to attract new meetings and events to our building.”

The Convention Center, which opened in May 1993, celebrated its silver anniversary with a series of events that included a community festival and honors from its partners in the hospitality industry. Also, in 2018, the center hosted a formal unveiling of its West Wing art collection, which had been installed over the course of the previous 12 months. The collection showcases the works of more than 70 artists and encompasses approximately 135 paintings, sculptures, and mixed media works. The artists, their biographies, images of the pieces that make up the collection, and video interviews with select artists can be viewed at www.paconventionart.com, a website launched by the Center to showcase the facility’s West Wing artwork.

The new painting colorfully encompasses the Broad Street and Market Street entrances of the Convention Center as well as the steel girders of the former Reading Railroad Terminal. The canvas moves from the cold of night to a warm day, with a historical theme tied into aspects of modern Philadelphia. Among the characters draped in the painting are famous Pennsylvanians Connie Mack, Mario Lanza and Marian Anderson.

“In a dream-like juxtaposition, I have included classic locomotives that are part of the history of the Reading Railroad, as well as two of Pennsylvania’s most important historical events, the “Winter at Valley Forge” and “Pickett’s Charge” at the Battle of Gettysburg,” Cushing said of the work. “There is also a contrast between the modern street view on the left and the “circa 1900” period view on the right.  Historical personages who were prominent in Philadelphia are placed between the pillars on the balcony.  The overall theme is to represent the Pennsylvania Convention Center in the context of the history and tradition of service which it occupies.”

Cushing has been living and working in Center City Philadelphia for 40 years. He is a graduate of The Pennsylvania Academy of the Fine Arts (PAFA), where he studied classic painting approaches and technique under celebrated instructors Arthur De Costa, Roswell Weidner, and Sidney Goodman, among others. Cushing works primarily in “oil on canvas” but also occasionally graphite pencil, charcoal, sepia ink and pastel.  He is known locally mostly for his cityscapes of Philadelphia.

“This is a unique piece that really showcases our building, the City, and Pennsylvania history,” said John McNichol, president and CEO of the Pennsylvania Convention Center. “We greatly appreciate the contributions by Charles Cushing and the dozens of other artists whose works of art bring added life and style to our building. I hope that when people visit our facility that they take some time to appreciate the unique, one of a kind pieces of art that are spread throughout our facility.”

The Celebration of Service held for Marian B. Tasco at the Pennsylvania Convention Center