A time to reflect 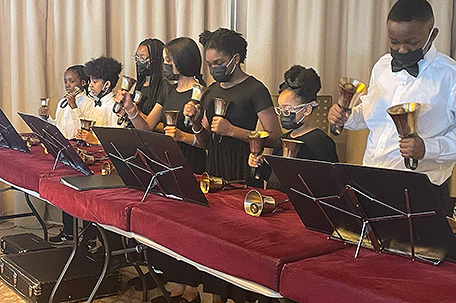 As the organization held its first Martin Luther King Jr. luncheon since the COVID pandemic hit, the Philadelphia King Center for Nonviolence called on Philadelphians to reflect on King’s memory and use it as a catalyst.

ABOVE PHOTO: The Jubilee Bell Ringers begin the MLK Day luncheon in the Rooftop Ballroom at the Sheraton Downtown Philadelphia.  (Photo by Denise Clay-Murray)

Over the last two years, the Philadelphia Martin Luther King Jr. Center for Non-Violence, Inc. has had to hold their commemoration of the late civil rights leader’s birthday virtually due to the COVID pandemic.

So, when the King Center held its first in-person King Day luncheon Monday in the Sheraton Downtown Philadelphia’s rooftop ballroom, it was a chance for everyone to connect and celebrate King’s life of service and sacrifice, Joye Nottage, the center’s executive director said.

While some of the vocal performances still had to be streamed in — Rachel Merrill, director and founder of Jubilee Music Enrichment, performed her selections via Zoom — everyone took advantage of the time together to reconnect.

Which is good, because at a time when the City of Philadelphia is still trying to climb out of what feels to some like a never-ending cycle of violence, remembering the King Center, its mission, and the man who inspired it is more important than ever was, Nottage said.

“The King Association should really be at the forefront because of what Dr. King stood for,” she said. “If Dr. King were alive, he would be really concerned about the violence. That was one of the reasons that we wanted to have the luncheon. Not just for remembrance, but to show everyone that the King Association is alive, well, thriving and pulling in a direction where we can help stop the violence, especially among the youth.”

About 300 people were met by the sounds of the Jubilee Bell Ringers of the Jubilee Musical Enrichment school as they entered the ballroom for the luncheon, which honored King Center volunteers and several Drum Majors in a variety of categories and disciplines. CBS3’s Jasmine Payoute was the mistress of ceremonies for the event.

Prior to the awards being presented, State Sen. Sharif Street (D-3rd Dist.) and U.S. Sen. Bob Casey Jr. were among those that gave remarks about King and his continued importance. Both men pointed out that many of the things that King was fighting for prior to his death are still unsettled now.

His memory should be an inspiration for all of us to continue the fight, they said.

“Dr. King had a purpose-driven mission,” Street said. “He was passionate about voting rights. He was marching with sanitation workers and advocating for a high quality of life for everyone when he was killed. We have an opportunity and an obligation to remember his legacy and continue his work.”

“Let us be inspired to act for the cause of justice,” Casey said.

This year’s Drum Major awardees were:

•  Ernest Garrett, president of AFSCME District Council 33 and winner of the Drum Major for Equity and Justice award.

This marks the 40th year for the King Center Luncheon. The luncheon is a fundraiser for the Center, which is located at 30th and Walnut Street and was founded in 1983 by the late C. Delores Tucker, an activist that would go on to become Pennsylvania’s Secretary of State.

While the King Center has been best known for working with young people in service to King’s legacy, the center has expanded its mission in recent times, Nottage said.

While the organization still offers college tours through the College for Teens program, which allows high school students to spend time on a college campus in the summer, and another program that lets young people re-live the Freedom Rides, the organization has also sharpened its focus to include such things as providing food for those in need at the height of the COVID pandemic and other things related to poverty, Nottage said.

The luncheon was proceeded by the ceremonial ringing of the Liberty Bell at Independence Mall. This year’s bell ringers were Susan and Harold Rosenthal, who were active in the Civil Rights Movement of the 1960s.

Sponsors for this year’s luncheon include Independence Blue Cross, Wawa, and CBS 3.