A time to grieve 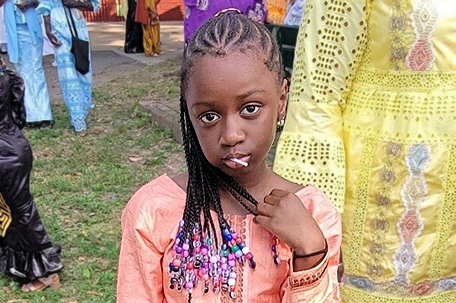 On the first anniversary of the death of 8-year-old Fanta Bility, family, friends, and community leaders gathered to honor her memory and to call for justice in her case.

Before her death last August, a bright, sunny Saturday morning might have found Serenity Varella and her friend, Fanta Bility, playing on the swings or sliding board in Sharon Hill’s Memorial Park.

They may have been making TikTok videos or talking about fashions, or any of the number of things that 8-year-old Fanta liked to do with friends.

“She was such a wonderful, wonderful little girl,” said Serenity’s mother, Jackie. “She had a beautiful spirit. She loved to play. I mean, she could play hard. Even gave the boys a run for their money.” But instead, the Varellas were among the group of family, friends and community leaders gathered to commemorate the first anniversary of Fanta’s death. Last August, Fanta was shot by police responding to a shooting at a football game at the borough’s Academy Park High School football game.

Since that day, the borough where she has grown up and lived the majority of her life hasn’t felt the same, Varella said. It especially doesn’t feel right to her daughter.

“I’ve lived here almost my whole life and nothing like this has ever happened,” she said. “Anyone who lives out here knows this is not normal. This was a baby — a baby that didn’t even get the chance to live her life. This family is hurting. This is not right.”

About 75 people gathered at Memorial Park to remember Fanta, comfort her mother, Tenneh Kromah, and the rest of the family, and to participate in a march calling for justice in her case.

Members of Fanta’s family from as far away as Holland came to the ceremony to not only share their memories of the gregarious, generous 8-year-old artist who would race her brother Abu to the microwave oven to warm up snacks, but also to thank the community for the support shown to them since her death.

“We are grateful to every resident, every community leader, and every elected official and organization that has supported our family over this past year,” said Fanta’s uncle, Abu Bility. “We want the public to know more about who she was as a person and the positive impact she had on our life.”

“One  of  the  main  things  our  family  wanted everybody to know is who Fanta was as a person, as a human and as a little 8-year-old girl that lost her life to senseless violence,” said her cousin, Saddiq Kamara. “For the past year, it’s been a roller coaster for our family.”

As the memorial, which was hosted by Radio One host Mannwell Glenn, progressed, many of the speakers focused on Tenneh Kromah, who stood quietly among her family as speaker after speaker shared remembrances of her daughter. When brought to the stage with her brother-in-law Abu Bility, she was unable to speak.

But everyone felt her pain.

“I see her mom out there and she’s trying to smile, but a piece of her soul is gone,” Varella said. “My baby is the same age. We’re not the same. She’s not the same. None of us are.”

Following the group of speakers, the family, friends, and community leaders in attendance marched from Memorial Park to Academy Park High School.

Over the last few months, the family has been trying to access the totality of the report that the borough commissioned into Fanta’s death. The way it was presented to the family provided them with little information, said Catherine Hicks, president of the Philadelphia Branch of the NAACP.

“It was so redacted that you can’t even read it,” she said. “You start with a couple of lines, and then the rest of the page is redacted. Then you go to the next page, and after one or two lines, that’s redacted. If you can’t get any information from [the report], why give it to us? The family needs some type of closure, some type of answers. I don’t understand why they can’t get those answers.”

From the time that Fanta’s case found itself on his desk, Stollsteimer believed it was something that had to be looked into. While a judge will ultimately determine whether or not the trial moves forward, he recognizes the impact that Fanta’s death has had on the community.

“It was a shooting outside of a football game,” he said. “One young girl was killed. Another boy was wounded. And the two young men who started this whole melee by shooting at each other shot a 14-year-old boy as well. So, this is a very horrible event that took place in Delaware County and has scarred us forever.”

Should the judges decide not to pursue charges, the case could go to the Attorney General Josh Shapiro’s office.

But under Pennsylvania law, the only way the AG could intervene is if Stollsteimer referred it to them because of a conflict of interest or a lack of resources, said Jacklin Rhodes, the office’s spokesperson.

“That being said,” Rhodes continued, “It is tragic that Fanta’s promise will never be realized, and AG Shapiro feels the family and community deserve clarity and justice.