A State of Emergency 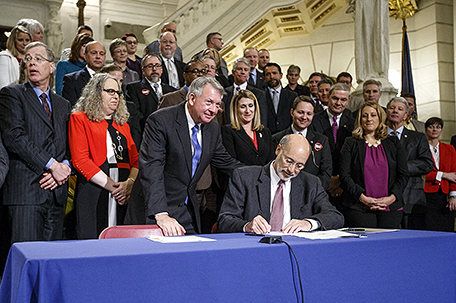 ABOVE PHOTO:  State Sen. John Wozniak, D-Cambria, stands next to Pennsylvania Gov. Tom Wolf, in the state Capitol Rotunda in Harrisburg, Pa. as he signs a package of bills to fight the opioid and heroin crisis, Wednesday, Nov. 2, 2016.  (Dan Gleiter/PennLive.com via AP)

On Wednesday, Gov. Tom Wolf put the weight of the Commonwealth of Pennsylvania’s emergency services behind the opioid crisis.

For many families in Philadelphia, the problem of a loved one fighting addiction to heroin or other opioids is an emergency that demands all hands on deck.

By declaring the opioid crisis a disaster worthy of an emergency management response, Pennsylvania Gov. Tom Wolf told these families that not only did he agree with their assessment, but the Commonwealth shared it too.

On Wednesday, Gov. Wolf held a press conference declaring the Commonwealth’s opioid crisis a statewide emergency disaster and announcing a full-court press that includes an enhanced state response, better access to drug treatment, which includes access to naloxone, the drug designed to treat overdoses, and better coordination between health and public safety agencies.

While there has been an improvement in Pennsylvania in terms of the number of overdose deaths from heroin and other opioids, there are still far too many and the state has to act, Wolf said in his announcement.

He’s going to use what he’s got — his power as governor — to get what he wants — a better grip on this growing epidemic.

“While we have made progress in combating the heroin and opioid abuse crisis and drastically expanded Pennsylvania’s response, we are still losing far too many Pennsylvanians,” Wolf said. “I am taking this step to protect Pennsylvanians from this looming public health crisis, and I am using every tool at my disposal to get those suffering from substance use disorders into treatment, save more lives and improve response coordination.”

There are 13 initiatives connected to this outreach including the establishment of an Opioid Command Center within the Pennsylvania Emergency Management Agency, expanded access to prescription drug monitoring, the ability for municipalities to make emergency purchases of naloxone, the drug used to treat opioid overdoses, more resources for families, first responders and others including the ability to leave naloxone with families, and streamlined access to drug treatment, including the use of satellite centers and fee waivers for people who need a birth certificate, and can’t afford one due to homelessness, Sarah Galbally, secretary of policy and planning for Gov. Wolf, said during a press call following the announcement.

The Departments of Health, Drug and Alcohol Programs, PEMA, the Pennsylvania Commission on Crime and Delinquency and the Pennsylvania State Police will be the agencies coordinating the response, Galbally said.

While this series of plans is an ambitious one, it doesn’t include any additional financial resources, Galbally said. Instead, resources for existing programs including Medicaid — which will be needed to pay for indigent rehab beds — from these departments will be utilized, she said.

The state of emergency is expected to last for 90 days.

“We know that we’re not going to cure the opioid epidemic in 90 days,” she said.

For places like Philadelphia, whose opioid issues have made national news, this series of initiatives, which also includes better monitoring of opioid prescriptions to keep people from doctor shopping in search of drugs and partnerships with pharmacists to get more naloxone into the hands of families in need, this plan can provide some much needed help, Mayor Jim Kenney said in a statement.

“I commend Governor Wolf for taking this bold step,” Mayor Kenney said. “The crisis is particularly acute in Philadelphia: when the final tally is complete, the number of fatal drug overdoses in the City last year may reach 1,200 – a one-third increase over 2016. I look forward to working with the Governor in the coming weeks and months, along with our partners in the state legislature, to mobilize the resources and additional tools needed to address the scourge of opioids. We cannot afford to wait.”

Black America: A state of emergency without urgency