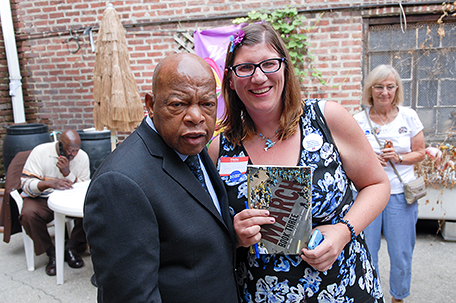 U.S. Rep. John Lewis was in town to receive the Liberty Medal for his work in Civil Rights. While he was here, he campaigned for Democratic Presidential candidate Hillary Clinton and shared his reverence for voting.

If you were looking for the Hillary for America offices on Germantown Avenue, the crowds standing in front of the former Infusion Coffee House, many of them making calls to potential voters, made it easy to spot.

It was standing room only inside as well on Tuesday as campaign workers signed in, took voter registration forms, and waited to hear from someone who knows all too well why voting is important: U.S. Rep. John Lewis.

Lewis, a longtime congressman representing Georgia’s 5th District, earned his place in history by fighting to gain the right to vote for African Americans. He was headed to the office to encourage campaign workers to promote the new one-stop voter registration site IWillVote.com, that was launched by the Clinton campaign on Monday.

A member of the Student Non-Violent Coordinating Committee (SNCC), Lewis was only 23 when he took the stage as the youngest speaker at the 1963 March on Washington. He was also beaten bloody when attempting to cross the Edmund Pettus Bridge in a march for voting rights from Selma, Alabama to Montgomery, Alabama in 1965.

In other words, he’s the personification of why voting in general, and Blacks voting in particular, is so important.

“He’s not only one of my heroes, he’s an American hero,” said Brenda Dixon-Gottschild, professor emeritus of Dance Studies at Temple University. “He’s one of my favorite people. He’s one of the people who’s walked the walk.”

Using a combination of charm and humor, Lewis spoke to the gathered campaign workers, sharing anecdotes about his life while thanking them for their service.

He also talked to them about his history, how icons like the Rev. Dr. Martin Luther King and Rosa Parks influenced him as a teen, the times he had visited the White House to talk to luminaries like President John F. Kennedy and his brother Robert and how he learned the value of hard work and patience as the son of sharecroppers in Troy, Alabama.

Lewis has seen a lot of history. He recently celebrated the 51st anniversary of the Voting Rights Act. He talked of crying tears of joy as Barack and Michelle Obama became the nation’s first Black President and First Lady.

But there’s one more bit of history Lewis wants to see, he said. And it’s one that’s going to take as many Pennsylvania voters as possible to make happen. 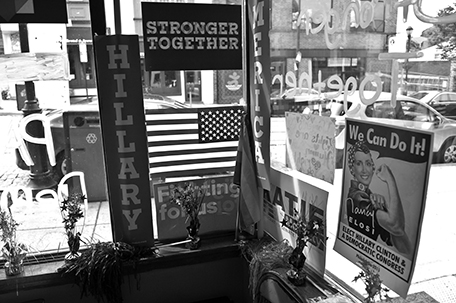 The Germantown Avenue campaign office was just one of the places Lewis visited while he was visiting Philadelphia. On Monday, he became the 27th recipient of the Liberty Medal at the National Constitution Center. On Tuesday morning, he shared his story with faith leaders mounting voter registration efforts in their churches.

It was at the Capital Grille that the SUN caught up with Rep. Lewis. He talked about receiving the Liberty Medal, the importance of this year’s elections, and why San Francisco 49ers quarterback Colin Kaepernick’s cheering section would include Dr. King.

SUN: Thank you for your time, Congressman Lewis. It’s an honor to meet you.

I watched your Liberty Medal ceremony on television Monday night. In light of the current political climate and some of the other things going on in the world, what does receiving this award mean to you?

JL: It was very special. I think that the Liberty Medal represents the best of America, it’s hopes, it’s dreams, and it’s aspirations. It represents the process that we’re going through to be a better nation, a better people. Or as the President says, becoming a more perfect union.

We’re not there yet. There are still too many people being left out and left behind. But despite everything, we’re still trying.

SUN: I understand that you’re going to be doing some things for Hillary Clinton’s campaign while you’re here. Everyone is talking about how important Pennsylvania is going to be to this year’s elections. What part do you see yourself playing here?

JL: I had told the Campaign that I was coming to Philadelphia and I wanted to do what I could to be helpful. I’m here today and I’m going to be visiting churches in Pittsburgh. The church plays a big role in our communities. When I was working with the Obama campaign in 2008 and 2012, we visited a lot of churches. I believe that voting is a sacred right.

SUN: During his speech to the Congressional Black Caucus Foundation this past weekend, President [Barack] Obama said to the audience that he would consider it a “personal insult to his legacy” if people didn’t come out and vote this year. Some people, particularly millennials, saw this as an example of the President “talking down” to them and felt insulted by it.

Did they get the wrong idea?

JL: I don’t understand why anyone would take what [President Obama] said as an insult. He’s the first African American president elected to the office. Of course, he’d want his legacy protected. And he believes that the only person who could do that is Hillary Clinton. She was in his administration and she’ll protect his legacy, while [Republican Presidential Candidate Donald] Trump would destroy everything he built. He would take us back. We don’t want to go back. We want to move forward.

SUN: One last question: I’m sure that you’ve noticed the number of athletes, most notably San Francisco 49ers quarterback Colin Kaepernick, that have chosen to either sit down or take a knee during the National Anthem to protest inequality and police brutality.

I had a debate with someone on social media who decried this form of protest and said “Dr. King marched with the flag. These people are being disrespectful”. I guess my question for you is, what do you think of that? When you all marched with the American flag during your protests, did it have the same meaning to you that some are demanding that it be given now?

JL: We didn’t carry the flag with us because of patriotism necessarily. We did it because we wanted to remind people that this was our flag too; this was our America. When we marched, the people we encountered on the streets would be carrying the flag of Alabama or in many cases the Confederate Flag….

SUN: Thank you so much for your time Congressman Lewis. I really appreciate it. It was an honor to meet you.

If you want to learn a little more about Congressman Lewis, or teach your kids or grandkids about what he did, Lewis is also the co-author of a three-volume graphic novel about the Voting Rights March from Selma to Montgomery entitled “March”. You can find the series at Amalgam Comics and Coffee House, 2578 Frankford Ave.