A Rocket For The Moonshot 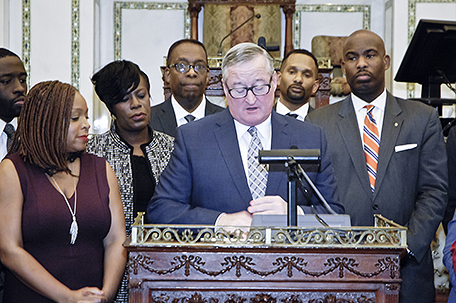 For a community to be wracked by poverty, a lot of things have to go wrong.

The educational system has to collapse. The job market has to collapse. Housing prices have to be out of reach. Fees and fines have to weigh down the populace. The weight of your worst mistake has to be tied around the necks of much of the neighborhood like an anvil.

Hopelessness has to take center stage.

As part of his inauguration speech in January, City Council President Darrell Clarke pledged that council would start fixing those conditions and by extension, lift 100,000 people out of poverty by 2024.

At a news conference in the chamber over which he presides, Clarke, joined by Mayor Jim Kenney and the members of council’s Special Committee on Poverty Reduction and Prevention unveiled a 14-page action plan that they hope will get the ball rolling on that promise.

Philadelphia is currently the nation’s poorest big city, according to Census data. About 400,000 or 24.5 percent of the city’s population, is impoverished. This plan starts the city on the path of no longer having this problem, Clarke said.

The plan represents a group effort, he said.

“For the last year, our Special Committee has met with residents and stakeholders across the city, listening to their best ideas to create jobs and lift people out of poverty,” Clarke said. “The result is our action plan, a public-private partnership with actionable steps and a mission.”

The committee was made up of people whose work gives them the chance to look at all sides of the poverty issue, said Councilmember Maria Quinones Sanchez, chair of the committee. From affordable housing, to increasing the minimum wage, to utilizing Community College of Philadelphia to greater effect, how a host of agencies, and community groups can be most effective in lifting people out of poverty is the goal of the report, she said.

That’s why some of the recommendations in the report are already being implemented, she said.

“This call to action and our report calls for direct investments in people, not programs,”

Among the things that are being implemented now are the Wage Tax refunds passed by City Council recently, something Councilmember Allan Domb, a champion of the Earned Income Tax Credit for low-income families and sponsor of the bill was excited about.

“We should not be filling the city’s coffers on the backs of people earning poverty wages,” he said. “We should be putting their hard-earned money back into their pockets to help them thrive.”

Another thing that is already being done is to take advantage of the federal dollars that the city is eligible for, but doesn’t utilize, Clarke said.

“There’s $463 million in benefits left on the table every year,” he said. “If we got just half of that, that would get a lot of people out of poverty.”

Other things that are being done now include basic income subsidies to help families make the transition out of poverty, subsidies designed to help low income families with rent, property tax relief for homeowners, partnerships between the School District of Philadelphia, universities like the University of Pennsylvania and Temple University, and the Community College of Philadelphia to expand community schools and focus on job training, and stipends to cover the costs of training that isn’t free.

Included on the committee were Domb, Sharmain Matlock-Turner of the Urban Affairs Coalition, Mel Wells of One Day At A Time, and Eva Gladstein of the City Managing Director’s office,

Mayor Kenney applauded the plan, and said that Council could count on the Administration for support.

“Poverty alleviation is traditionally a role of the federal government, but now more than ever, cities like ours must lead on this and other critical issues,” he said. “I commend Council and all of the partners for joining together to tackle the greatest challenge to our city.”