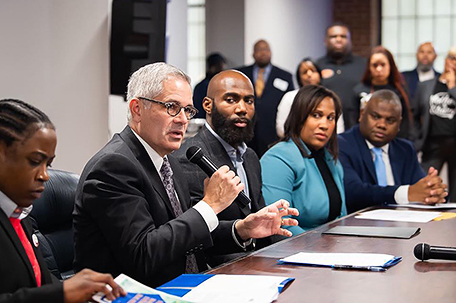 Cash bail is on the way out in Philadelphia. The folks that are making it happen gathered in Kensington on Monday.

Because Philadelphia has a 26 percent poverty rate, there are a lot of things that its residents don’t necessarily have access to.

One of those things is money that can be used to bail them out of jail. According to a study done by the American Civil Liberties Union, 73.6 percent of the defendants assigned cash bail in Philadelphia’s courts are classified as indigent. In 2018, Philadelphia’s judges set bail at $50,000 for 25 percent of the city’s defendants.

On Monday, a group of community leaders, public officials, and members of the Philadelphia Eagles gathered at Impact Services in Kensington to talk about the ways that this is starting to change, identify ways to stop it from happening and to help those impacted by this issue by connecting them with the services needed to move them forward.

The Players Coalition — a group co-founded by Eagles safety Malcolm Jenkins — partnered with the Defender Association of Philadelphia and the Philadelphia Community Bail Fund for the bailout and services fair. 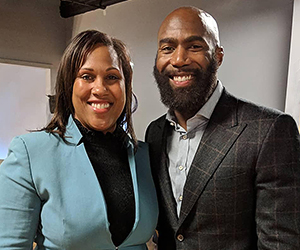 Thanks to money donated by individual Eagles and matched by the team’s Social Justice Fund, nine people were bailed out of jail and allowed to go home for Thanksgiving with their families.

Calling reform of the criminal justice system the civil rights issue of our time, Keir Bradford-Grey, chief of the Defenders Association, praised the efforts that have brought the issue of cash bail and its impact on poor communities into the light. As it stands now, the current system only provides a means for mass incarceration, something that is unsustainable.

“Re-entry assumes that people need to sit in jail and then re-enter into society,” she said. “But we want to make a coalition filled with people and call it pre-entry. We want to look at services and how we can help people from the very beginning so that decision makers like my partner Larry Krasner can make better decisions about what to do. Some people don’t need to be straddled with conviction. We need to find better solutions that are sustainable. We want to empower people.”

Among the ways that the Defenders Association is empowering those who impacted by bail policy is through LaTonya Myers as a bail navigator. As a navigator, Myers will help those impacted by the bail system connect to services that could correct some of the things broken by not being able to get out of jail such as the loss of a job, loss of housing, and being kept from education.

It’s a set of circumstances Myers knows all too well because she’s gone through them. She was arrested for a crime she didn’t commit, and while she was exonerated for that crime, being incarcerated until her trial left a mark, she told the audience.

“I want people to understand,” she said. “I came home. I was innocent, but I was held on bail for nine months. In that nine months, I lost my cousin, I lost my aunt, I lost my job, and I lost my opportunity to start my first year of college. And while I was there, I got to see what others go through.” 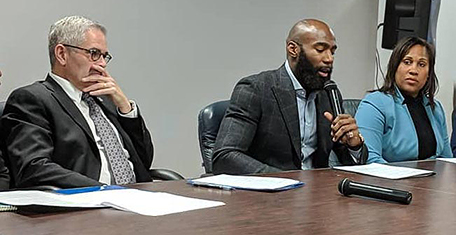 Philadelphia is ahead of the curve when it comes to reforming its cash bail system thanks to the efforts made by grassroots organizations, the Defenders Association and District Attorney Larry Krasner, who made getting rid of cash bail for a number of offenses a part of his campaign. He has taken 25 offenses off of the bail list since taking office.

While he’s gotten a certain amount of blowback for his stance, it comes from a perspective of common sense, Krasner said.

“This should not be a country where you sit in jail because you are poor,” he said. “And if there’s anything that my office can do to make sure that the people who are sitting in jail are there for good reasons, not because of poverty, we’re going to do it.”

But while it’s great that the Defenders Association and the DA’s office have joined with non-profits Iike the Philadelphia Bail Fund, the Players Coalition, the Eagles Social Justice Fund and the room filled with grassroots organizations like E.M.I.R. (Every Murder is Real), Mothers In Charge and Ardella’s House, long-term sustainable “pre-entry” like the kind that Bradford-Grey is proposing and Myers is helping create through her historic new job is going to require some buy-in from state and local leaders. It’s going to require significant funding from these leaders.

That kind of political will is going to have to come from the people, Jenkins admits. While the majority of the politicos he’s talked to recognize there’s a problem, it’s not necessarily top of mind, he said.

“They agree that there needs to be reform, that the War on Drugs was a failure, and that we’re over-incarcerating our citizens,” he said. “But the regular question about what keeps holding it up is about the politics. It comes down to the constituents. If people aren’t clamoring about it, it’s not high up enough on the priority list.”

“So that’s one of the areas that myself and my fellow athletes have a place to make an impact,” Jenkins continued. “To make sure that we’re educating people about what is happening in these communities, what is happening with our cash bail system, and what’s happening with our criminal justice system so that people know these injustices and care enough to create a movement that pushes on elected officials to make this a priority. That’s what you’ve seen here. And hopefully, what we’re doing here in Philadelphia can be modeled in other places.”

But how do you show this model to the world? How do you get it out there?

Well, in Philadelphia, you can use the clout that comes with being the starting safety for the team that brought the city its first Super Bowl Championship parade…

“I think it’s been a perfect storm of things to happen specifically in Philadelphia, which is kind of why we started our model here,” Jenkins said. “[It was] having Larry Krasner as the DA in the same year as we won the Super Bowl and the players advocating for these issues on the highest stage that there is on Super Bowl media day. You’ve got media from all over the world there and you’re talking about these issues. They’ve never had this kind of exposure before. And it’s created an environment where you can educate the public, where you can motivate those at the grassroots level and lift up their efforts and where you can talk about policies to change these things more so than in years past when we didn’t have all these eyes on us.”