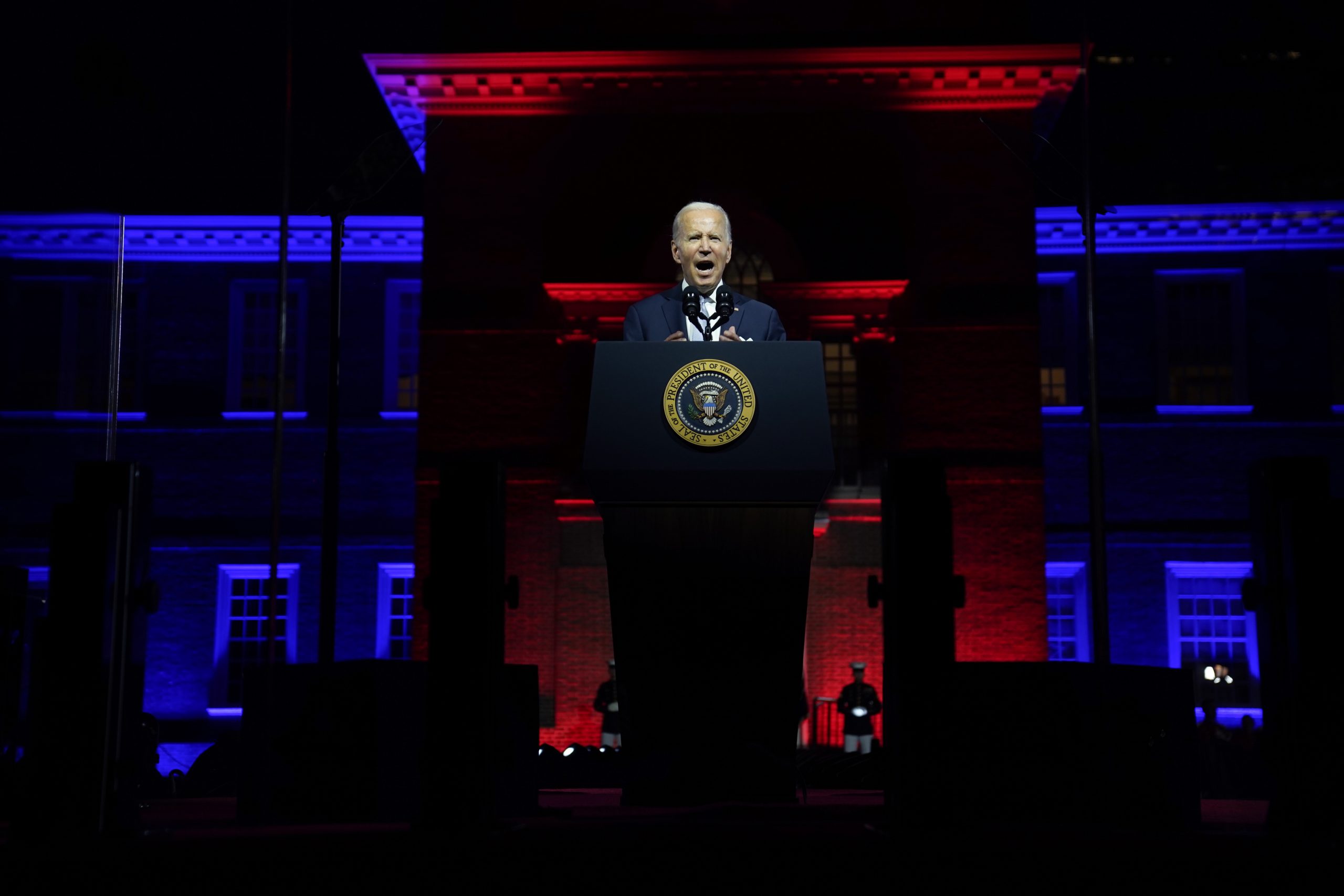 The symbolism wasn’t lost on many of the people attending President Joe Biden’s nationally televised speech at Independence Hall on Thursday night.

As the midterm elections approach in November, they do so in an America where a lot of rights that people are used to having are either on shaky ground or technically no longer exist.

At a time when Americans need to be unified to preserve freedoms, people needed to hear from their president, said State Sen. Sharif Street, chair of Pennsylvania’s Democratic Party. Because he had attended a rally Biden held in Wilkes-Barre earlier this week, he had an idea of what he’d be speaking about.

“I think he’s going to try and bring the country together,” he said. “And remind people that we need to move toward the best of what we are, and not backward toward the vision that gave us a Civil War.”

In the same space where the Constitution was created, Biden told the audience that the actions of former president Donald Trump and the Republicans still held in his thrall have put the future of the American republic at stake.

And while hearing that may anger some and hurt the feelings of others, the issue is far too important to risk being anything other than totally honest with the American people, Biden said.

“Equality and democracy are under assault.  We do ourselves no favor to pretend otherwise,” Biden said. “So tonight, I have come to this place where it all began to speak as plainly as I can to the nation about the threats we face, about the power we have in our own hands to meet these threats, and about the incredible future that lies in front of us if only we choose it.”

While he acknowledged that not all Republicans were MAGA Republicans, and that he had been able to find common ground with the more moderate members of the party, Biden also said that they’re not the ones in charge.

The ones in charge are the people who don’t want to honor the will of the voters and are determined to take the country back to a place where the right to use contraception, the right to privacy, and the right to marry whomever you love no longer exist, Biden said.

“MAGA Republicans do not respect the Constitution,” he said. “They do not believe in the rule of law. They do not recognize the will of the people. They refuse to accept the results of a free election.  And they’re working right now, as I speak, in state after state to give the power to decide elections in America to partisans and cronies, empowering election deniers to undermine democracy itself.”

While the threat to democracy that MAGA Republicans represent is real, it’s not insurmountable, Biden said. There are more people who reject Trump and his “extreme MAGA ideology,” than those who accept it, he said.

But in order to win the battle against that threat, everyone has to stand up, Biden said

“I will not stand by and watch the most fundamental freedom in this country — the freedom to vote and have your vote counted — be taken from you and the American people,” Biden said. “As your president, I will defend our democracy with every fiber of my being, and I’m asking every American to join me.”

“You can’t be pro-insurrectionist and pro-democracy,” Biden continued. “They’re incompatible.”

While he may have encouraged a Democratic base that has been waiting for him to call a spade a spade when it comes to the extreme right, Biden’s speech made Trump partisans — who hung on to his every insult against Democrats — more than a little angry.

“If only Joe Biden had 1/10th the disdain for Iranian terrorists as he does for Republicans and his fellow Americans,” Arkansas Sen. Tom Cotton said on Twitter.

Trump’s namesake son Donald Jr. chided the media for giving Biden the same kind of leeway his father enjoyed at his rallies.

“Imagine what the media would do if Trump gave that speech about millions of Democrat voters,” he said. “It really makes you realize how partisan and broken they are when watching them desperately run [and] cover for arguably the most divisive speech in American history.”

The irony of the younger Trump’s statement is that most CBS, ABC, NBC, and FOX affiliates didn’t run Biden’s speech live.