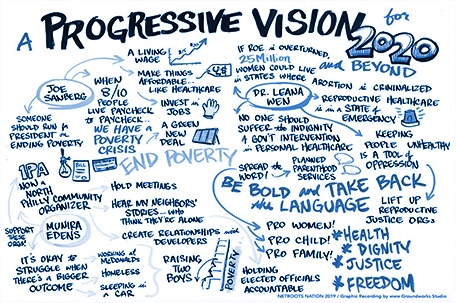 At the recent NetRoots Nation convention held in Philadelphia, Joe Sandberg, co-founder of Aspiration.com and founder of Working Hero Action, began an afternoon keynote event titled “A Progressive Vision for 2020 and Beyond” speaking about the modern, generalized definition of poverty, and how it often lacks nuance. The keynote was a continuation of a panel discussion held earlier in the day entitled, “Building a Movement to #End Poverty in America.”

“Poverty has become what the numbers say instead of how people are living,” Sandberg said. “When we define whether someone is poor by the mathematical amount of money they make instead of the emotional and lived experience of their daily life, we relegate them to the status of a thing.”

Sandberg noted that around eight out of 10 Americans – including those who are often touted as the “middle class” – are living from paycheck to paycheck.

Some of the main reasons we are facing a poverty crisis in the US is because our system is infected with ongoing structural racism and structural misogyny, he said. He also said that we need a bold investment in jobs, including those in the renewable energy sector.

Munira Edens — the North Philadelphia community organizer for One PA — recounted her own journey through what is categorized as deep poverty. In the process of earning her GED and a nursing assistant certification, she had to drop out of school to provide for her family. Rather than see it as a setback, she saw it as a life lesson for herself and her children.

“I had to show my boys that it’s okay – it’s okay to struggle, because it’s a bigger outcome” she said.

At one point, she found herself having to work at McDonald’s for $7.25 per hour, Pennsylvania’s current minimum wage.

“I worked hard to prove myself,” she said. “[I had] to sustain a minimum wage job, where my title was a cashier, but [considering] the duties that I performed there, I should have been the boss.”

It was during this time that Edens and her family became homeless.

“I was actually living in a park — Love Park,” she said. “I actually slept there, before they renovated it. I actually still will walk out this door and see people that I slept with.”

Although her income eventually improved, Edens said that the struggle to stay above water and about the safety of her sons as young Black men is a constant worry. They’ve only been in their current home for two months; over the last five years, they’ve had to move at least five times, she said.

As a community organizer, Edens has zeroed in on the impact that gentrification and development – and the high rents, high taxes, foreclosures and other hardships that come with it — have had on the community’s long-time residents. Along with her organization, she is fighting to end the cycle of displacement.

“We’re fighting to keep the land that we need to live on,” she said. Saru Jayaraman — attorney, author, advocate and co-founder of the Restaurant Opportunities Center

United — told the attendees about the daily struggle for survival of the nation’s 14 million restaurant workers. There are currently 43 states, including Pennsylvania, that are legally allowed to pay tipped workers below the minimum wage, she said. In fact, tipped worker’s wages have actually gone down in New York.

“What does that mean for the future of our country, our economy, our democracy, when half of the country cannot afford to eat out in the restaurants they work in, let alone eat afford to eat?” she asked.

She spoke about the controversial history of tipping. “It turns out that tipping is a practice that originated in feudal Europe. Aristocrats gave tips to serfs and vassals, always on top of a wage. But when it came to the states – right around the time of Emancipation — the restaurant lobby demanded the right to hire newly freed slaves , not pay them anything at all, and have them live entirely on tips, a mutation of the concept of tipping.”

The group held a simulation exercise following the keynote, where nine elected officials from Pennsylvania and others spent an hour serving convention goers to help them better understand what tipped workers are up against daily.

Mayor Michael Tubbs of Stockton, California told the attendees about the personal hurdles as a young African American professional he had to overcome to get to this point, such as being the son of a teenaged mother and a father who has been incarcerated for virtually his entire life and the burden of high poverty and low opportunity.

After eventually earning a full scholarship to Stanford, followed by an internship in the Obama White House, Stubbs was fairly confident in the belief of the myth of American exceptionalism. During his internship, he received a phone one day that would change his life forever.

“My mother called me in 2010, and she told me that my first cousin had been a victim of a homicide,” he said. He had been murdered in Stockton, California. In that moment, I was faced with a choice; the choice was one of either apathy or action. Whether to stay angry, stay upset, be nihilistic, or to do something about it.”

He decided that the best way forward was to run for Stockton City Council at 21 as a college senior. He won. He went on to run for mayor in 2016, and won that contest as well.

When it comes to the 2020 election, Stubbs told the audience that a progressive, problem solving approach is needed.

During the final portion of the discussion, Sen. Jeff Merkley and Rep. Pramila Jayapal presented an overview of some of the legislative measures that they and other Democrats have taken which address some of the main factors that affect poverty in this country, including stagnant wage growth. However, without full control of Congress, there is no chance for them to be enacted. In addition to winning back the presidency, taking control of the Senate in 2020 is a must, Merkley said.