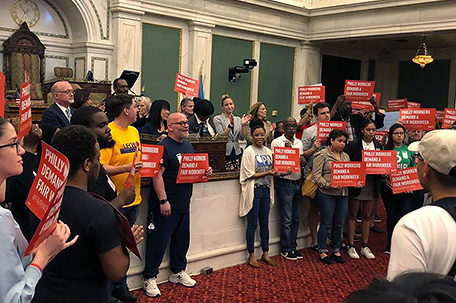 Philadelphia City Council passed three bills designed to make things better for those on the wrong side of the poverty line.

For people like Trine Smith, visits to Philadelphia City Council that end like last week did are few and far between.

Smith, who currently resides in Mantua, was in Council to champion a bill proposed by Councilman Curtis Jones that would require landlords to give current tenants first preference when it comes to renewing their leases and to make it so landlords couldn’t just throw tenants out of apartments or rental housing arbitrarily. The Philadelphia Tenants Union and other groups had helped fight hard for this bill.

When it passed unanimously, Smith could hardly contain herself.

“I’m overjoyed and ecstatic,” said Jarrett Smith, the organizer of the Tenants Union’s efforts regarding this bill. “We’ve been working on this for two years. This is a vote for tenants rights in Philadelphia.”

In fact, there were a lot of winners in City Council chambers that day. City contractors making less than $15 an hour won when Council voted to pass the Minimum Wage bill. And people looking for consistent work hours won when the Fair Work Week bill passed.

It was a banner day for those in need that had been a long time coming, said the Rev. Jay Broadnax, president of the Black Clergy of Philadelphia and Vicinity.

On a day when Council Chamber was packed and public comment on the bills took twice as long as usual, supporters of all three bills made their voices heard until the votes were cast.

While all the bills were important, the Fair Work Week bill, sponsored by Councilwoman Helen Gym, was the most anxiously awaited. As she brought the bill up for passage, Gym conceded that it wouldn’t solve all of the city’s problems with poverty.

But it’s a step forward, and that’s important, she said.

“Poverty is not inevitable,” she said. “It is manufactured. This is a floor, not a ceiling.”

As the vote was taken, activists from UNITE Here, a union made up of the restaurant, hotel and hospitality workers that will be most impacted by the bill, and anti-poverty activists from POWER Interfaith (People Organized To Witness, Empower and Rebuild) said thank you to the councilmembers. The bill passed by a 14-3 vote and the crowd erupted in cheers. Councilmen Brian O’Neill, David Oh and Al Taubenberger voted no.

While Fair Work Week got a shot in the arm last Monday when Mayor Jim Kenney publicly declared his support for it during a news conference at the AFL-CIO Union Hall in Center City, that support — and his support for a new minimum wage — was set in stone when he issued a statement following the votes.

“I applaud members of City Council for their overwhelming approval today of two pieces of legislation that will help give working Philadelphians a chance to improve the quality of their family’s lives,” Kenney said. “The Fair Work Week and Minimum Wage bills will go a long way to ensuring that our hard-working residents have the dignity of stable employment and a steady schedule. With Council passage, I look forward now to signing both measures into law.”

The Fair Work Week bill goes into effect in 2020, while the other anti-poverty bills go into effect within 30 days of Mayor Kenney signing them.