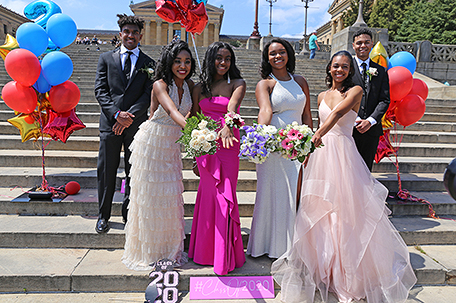 ABOVE PHOTO: (From left) Carson Demarco, Noelle Smith, Madison Tyler, Sydney Kemp, Sierra Gee and Christopher Booth pose for a prom day photo during the Memorial Day Quarantine Pop-Up Senior Prom on Monday at the Philadelphia Museum of Art. The event was organized by their moms to celebrate this rite of Senior Year passage, coronavirus quarantine notwithstanding.

A group of mothers decided that the  coronavirus wasn’t going to rob their children of a senior year ritual.

It’s not uncommon for young men and women to gather at the steps of the Philadelphia Museum of Art for pictures on prom night.

But that was before the coronavirus decided that it was going to force all of us into our homes and make large gatherings like proms and graduations either hard to do due to social distancing rules, or impossible because it’s hard to socially distance when the event is a graduation for more than 500 young people.

So the gathering on the Art Museum steps took on a lot of significance for a group of high school seniors —- Sierra Gee, Sydney Kemp, Noelle Smith and Madison Tyler, who are headed off to Howard University —- and their escorts as part of a pop-up prom.

On Monday, balloons, signs, and all the things you’d expect to see at a prom decorated the city’s most famous staircase as the young women and their escorts —- Christopher Booth, Elijah Davis, Carson DeMarco and Demetrius Deramus —- took pictures, shot video and engaged in a rite of passage that’s taken on a special significance at a time when it’s more about social distancing than social events.

The event was organized by the girls’ mothers —- Dominique Casimir, Elisha Gee, Colena Johnson-Kemp and Leslie Patterson-Tyler —- as a way of showing them that memories can still be made, even under the most daunting of circumstances, Casimir said.

“We wanted to show [our children] that you can have your moments, even in a pandemic,” Casimir said. “Memories don’t cost anything.”

“[The memories] may be different, but they can still be great,” Gee said.

To get the ball rolling, Casmir contracted City Council President Darrell Clarke (the Art Museum is a part of his district.) As long as the group observed social distancing guidelines and wore masks, the City was on board.

When he heard what the moms were planning, Richard Wah —- a local photographer —- and his partner, videographer Markee Ruffin, came out to immortalize the event. In 2017, Wah gave young people who couldn’t afford to pay for senior graduation portraits the chance to get them for free through his studio, Richard Wah Photography.

With decorations from Jeanette Luna and the backdrop of the Art Museum, pictures of the girls, dressed in beautiful dresses and holding flowers, were taken.

“I think that this comes very close to being an actual prom,” said Sydney Kemp, who graduates from Hatboro-Horsham High School in Bucks County this year.

“We got to make memories and hang out and make new friends.”