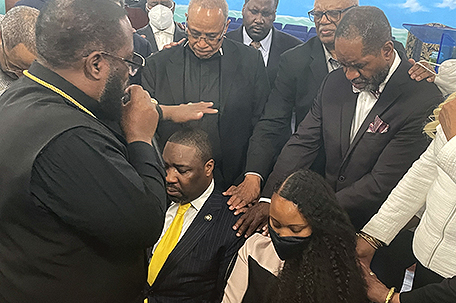 ABOVE PHOTO: The ministers laid hands on Councilmember Johnson and his wife, Dawn Chavous. (Photo/Denise Clay-Murray)

Before heading into a trial that could end his political career, Councilmember Kenyatta Johnson went to church.

On most Thursday mornings, Philadelphia City Councilman Kenyatta Johnson would be joining his Council colleagues on Microsoft Teams to work on the people’s business.

But this Thursday, Johnson appeared in federal court as opening arguments began in the federal corruption trial of both himself and his wife, consultant and author Dawn Chavous.

Three days of jury selection preceded the start of the trial, which is being heard by U.S. District Judge Gerald McHugh in the James A. Byrd Courthouse at 6th and Market Streets. The mostly white jury is composed of nine men and three women.

In an indictment released in January 2020, Johnson was accused of using taking $66,000 in bribes in the form of a “low-show” contract for Chavous in exchange for using his influence as a councilman to protect properties owned by Universal Companies, a non-profit founded by R&B legend Kenny Gamble.

The trial is being split into two parts. The charges related to Johnson and Chavous will be decided first, while their co-defendants, former Universal Companies executives Rahim Islam and Shahied Dawan, are a part of this trial. The two men — who are indicted on a total of 22 counts including tax fraud, honest services fraud, embezzlement, and racketeering — will deal with the bulk of their charges afterward.

Both trials are expected to last a little over three weeks and all of the defendants, including Johnson and Chavous, have pled not guilty to the charges.

Islam is a former contributor to the Philadelphia Sunday SUN.

A gathering of ministers prayed over the couple and anointed them as a means of providing them with comfort and strength during the three-week trial.

The service was a way of showing support to someone who has always shown his community support, said Bishop James Robinson, leader of Yesha Ministries. Just like Johnson has always had their backs, the community will have his, he said.

Johnson and Chavous spoke briefly at the service, thanking everyone for their support.

“I’m truly humbled,” Johnson said. ”I thank all of you for standing with me and standing beside me and being supportive of me. You know, in this process, you see who is there for you. So, I do not take this lightly. The beauty of this process is that it’s stretched my faith and brought me closer to the Lord.”

If convicted, Johnson and Chavous face a maximum of 20 years in prison and Johnson would have to resign his Council seat.

He would also be the second member of Council to have to resign his seat. Councilman Bobby Henon resigned his seat in January after being convicted on bribery charges along with former Local 98 Business Manager John Dougherty. A special election to fill Henon’s unexpired term has been announced for May 17, the day of the Pennsylvania Primary.

Henon and Dougherty’s sentencing is scheduled for next month.