A poem by Eli Siegel about Dr. Martin Luther King, Jr. and what humanity hopes for 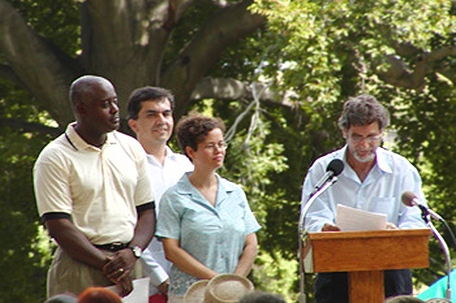 As we observe the federal holiday honoring Dr. Martin Luther King’s courageous life and his opposition to racism, poverty, and war, I am moved to look anew at a poem about justice and the hopes of humanity by Eli Siegel, the great American poet and founder of the education Aesthetic Realism.

Something Else Should Die: A Poem with Rhymes

Their purpose was to have

us say, some day:

With enormous respect, Siegel sees two men of different races, living in different centuries, as united in opposition to injustice. And the music of this poem, with the names given such meaningful weight, has us feel the reality of both men — we feel they are alive, warm, near. Abraham Lincoln, as Dr. King himself recognized, wanted slavery to end, and considered the Emancipation Proclamation “the central act of my administration and the great event of the 19th century.” His assassination by John Wilkes Booth, a man who hated equality for anyone with skin different from his own.  Siegel wrote in his note to this poem: “[T]he killing of Lincoln made for a while an ugly individual attitude supreme. It was so with the killing of Martin Luther King.”

Dr. King is loved for his bravery, sincerity, and enormous energy in fighting for justice to people of all races including in the Civil Rights movement, the Poor People’s Campaign to end poverty, and his opposition to the war in Vietnam.

In 1968 in Memphis, he was murdered after standing up for striking sanitation workers. Soon after the news broke, Siegel, in an Aesthetic Realism class, read the poem he had just written. I had the immense privilege of being in that class, and will always remember the great emotion Siegel had as he spoke of Dr. King’s large meaning. Siegel’s passion against injustice is the most beautiful thing I know. He explained that contempt — the desire in every person to “think we will be for ourselves by making less of the outside world” is the cause of all human injustice, including the racism and economic exploitation Dr. King spent his life fighting against. And Siegel explained that the alternative — honest respect for the world — is something people are longing for more deeply than they know.

In “The Right of Aesthetic Realism to Be Known,” chairman of education Ellen Reiss said:

“Racism won’t be effectively done away with unless it is replaced with something that has terrific    power. What needs to replace it is not the feeling that the difference of another person is somehow tolerable. What is necessary is the seeing and feeling that the relation of sameness and difference between ourselves and that other person is beautiful. People need to feel, with feeling both intimately personal and large, that difference of race is like the difference to be found in music: two notes are different, but they are part of the same melody; they complete each other. Each needs the other to be expressed richly, to be fully itself.”

I  am grateful to have learned from Aesthetic Realism that my mind — and that of every person — was made to like the world, see meaning in it, not to feel important by despising it. As I began to see the feelings of others as real — including people who were very different from me — my life became happier, more expressed, and my individuality was heightened. This led to work I treasure as a civil rights historian, journalist and co-author — along with 23 diverse men and women — of the book, “Aesthetic Realism and the Answer to Racism.”

I tell now of two important men who, with others, have seen the immense value of Eli Siegel’s understanding of the cause of racism and what can end it.

Two Men and an Historic Event

The centenary of the birth of Eli Siegel — August 16, 2002 — was declared “Eli Siegel Day” in Baltimore, the city where he grew up, in proclamations by the mayor and by Maryland’s governor. The celebration in Druid Hill Park included an address by Ellen Reiss, who spoke about Eli Siegel’s life, his magnificent scholarship, integrity, and kindness.

Allan Michael, one of the first African American maritime captains in New York Harbor, is a photographer and an Aesthetic Realism associate. He was one of the speakers at this event that day.

“It is hard to be Black in this country and feel that justice is going to come your way, because Black people have endured horrific injustice for years, from slavery to racial profiling,” he said. “This has made for tremendous anger in our nation. For example, I was angry and humiliated being stopped on Route 80 by a state trooper for no apparent reason, as my private belongings were systematically strewn out on the roadside.”

” I join my fellow speakers in saying I know that Aesthetic Realism is the means to end racism,” he continued. “In fact, the Aesthetic Realism education is living proof that through what Mr. Siegel explained, people of one background not only can be fair to others, but can understand them. It was through the thought of Eli Siegel, a White man, that I was able to understand the deepest things in myself; and this points to a fundamental hope for all races.”

“In beautiful prose, Mr. Siegel stated: ‘It will be found that Black and White man have the same goodnesses, the same temptations, and can be criticized in the same way. The skin may be different, but the aorta is quite the same.’ Humanity will thank him as I do for teaching in Aesthetic Realism how all people can honestly see each other with depth, kindness, and respect,” Michael concluded.

U.S. Rep. Elijah  Cummings (D-Md.)  — who served in the U.S. House of Representatives for Maryland’s 7th District from 1996 until his death last October — was a lifelong civil rights advocate known for his integrity and courage, including in his last days as chair of the House Oversight Committee.

On July 26, 2002, Congressman Cummings gave a tribute on the floor of Congress, to Eli Siegel in which he read the poem, “Something Else Should Die.” His tribute, which includes writings by Eli Siegel and Ellen Reiss, is published in the U.S. Congressional Record (#E1445), and begins:

“I rise today to honor a great Baltimorean poet, educator, and founder of Aesthetic Realism, Eli Siegel. … a teaching method, based on Aesthetic Realism, has been tremendously successful as an effective tool to stop racism and promote tolerance, because it enables people of all races to see others with respect and kindness. His poetry and the education of Aesthetic Realism will be studied in every English, literature, and art classroom across the nation for years to come.”

These two men, Allan Michael and Elijah Cummings, both of whom benefitted from and were inspired by the life and work of Dr. Martin Luther King,Jr. represent the hopes of America, an America that needs to know and study the powerful, ethical education that understands the source of racism and can have it end at last.

Martin Luther King and how the Dream can become reality