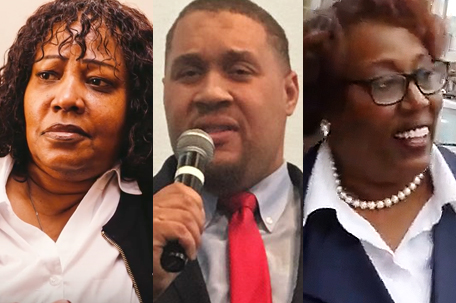 With the achievement of several historic Philadelphia “firsts” in Tuesday’s general election, comes the increased scrutiny that all groundbreaking public figures face.

Several of the City’s general election winners who fit into this category are aware of this spotlight, but are ready and up for the challenge — each with specific priorities to address from day one.

Community organizer Tracey Gordon — who has previously run for the positions of City Council member, Pennsylvania State Representative and City Commissioner — is also making history as the first African American and woman elected to serve as the City’s Register of Wills.

“ A lot of time [as women] we have the microscope on us,” she said. “ So, I have a lot of women who already hold office who have offered to mentor me, such as Councilwoman Cindy Bass and Councilwoman Quinones Sanchez. I have women who I can actually lean on to help to navigate [the role of] an elected official.”

Gordon feels that her role as a single parent, block captain, committeewoman, community leader has prepared her for this next step as a “first” in her field, which we has its own particular brand of challenges as the City changes demographically.

Gordon also looks forward to being an example to young women and other women who have run for office, but who have not been successful.

“As you know, I ran for office before, but I never gave up,” she said. [However], a title doesn’t define you as a leader. You define yourself as a leader.”

She sees one of her greatest challenges being raising public awareness of the role of the Register of Wills office and the services they provide.

“Most people don’t know that the office exists,” she said. “So I need to get out there and make sure that I educate people about the importance of estate planning and making sure that they have a will before they pass away.”

Addressing the “tangled titles” issue is also a major priority for Gordon.

“Currently, we have a crisis in tangled titles,” Gordon said. “ A tangled title occurs when you have a legal interest in a home, but your name is not on the deed. For example — it’s your great grandmother’s home; she left it to you, but the deed is not in your name. …one of my biggest challenges is to help people with tangled titles to get the deeds put in their name.”

It’s all about generational wealth and making sure that people are able to access and retain it.

Over the next 25 years, $76 trillion will be passed down and transferred from the Baby Boomers in the United States, she said. It is important that the office works efficiently, and takes issues like that of Philadelphia’s tangled title crisis seriously.

“This is an office that is funded by the City, but it’s really a state office,” she continued. “So I’m going to have to get the support of state legislators and of course, City Council, so that we can come up with a comprehensive plan. ”

Guardian Civic League president and Sheriff-elect Rochelle Bilal hopes that her election inspires other Black women to do what she has done, and that in future, the designation of being “the first” in one’s field is eventually replaced by simply being the best.

“This is another glass ceiling broken,” she said. “It says that they need to break the next one, and keep breaking them, until there are no more “firsts.”

The literal the new sheriff in town, Bilal wants to conduct a top to bottom review of the office.

Bilal wants the office to be more service oriented going forward, she said. This includes spearheading a stronger effort to help educate Philadelphians about how to keep their properties before they get to crisis point, rather than one focused on advertised sheriff’s sales.

“When people get into that situation, they don’t know about all the programs that are out there to help them to save their homes,” she said.

Bilal is also focused on the effects of trauma in courtroom proceedings, and ensuring that those who find themselves in court are not further traumatized by representatives of the Sheriff’s Office — training and education can help with this, she said.

Although not necessarily a “first” in his new role as one of three City Commissioners, Omar Sabir plans to take his longtime role as a popular grassroots leader to the office.

“There’s a lot of people that don’t feel that they’re involved  in government,  that they have a place in government,” he said. ” We have to uplift and we have to educate[in order to] transform their thinking and let people know that they are [also] part of this government.”

Raising voter participation numbers are key in this regard, as many of the areas of Philadelphia with the highest crime rates and lowest performing schools also the lowest election turnout rates, he said.This affects the policy decisions that could help turn those situations around.

As a Commissioner, Sabir believes that he can build upon the community-based voter advocacy role he has cultivated over the years.

“A lot of people don’t know what the City Commissioner’s office does; with me being there, with a certain brand recognition from being involved in the community, people are going to be more inclined to listen.”

Also among his priorities as Commissioner will be hiring more people from the community, ensuring that the Office contracting process is open and fair, and working with other stakeholders to help get more people involved in the voting process.