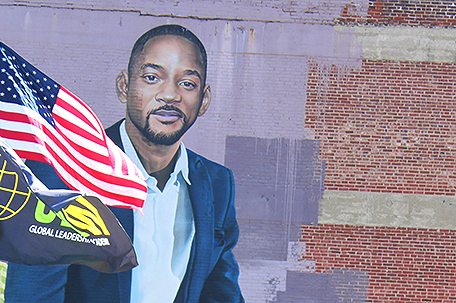 ABOVE PHOTO: Will Smith Mural at 44th & Girard Ave   (Photo by Jim Brown)

West Philadelphia fans react to Will Smith and Questlove’s first-time Oscar win and that controversial slap.

What a crazy night at the Oscars this year, where two young men from West Philadelphia and Wynnefield — Will Smith and Ahmir “Questlove” Thompson — won Oscars for work in their respective categories of Best Documentary (“Summer of Soul”) and Best Male Actor (“King Richard”) in a talented field of actors that included Smith’s idol, Denzel Washington.

However, Smith’s Oscar win was marred in controversy after his altercation with comedian Chris Rock, when Smith responded angrily to a joke about his wife, Jada Pinkett Smith, walked on stage, slapped Rock, then walked back to his seat, where he sat for the remainder of the show.

The SUN spoke with a few people around West Philadelphia about the two Academy Award winners and the “slap seen around the world.” Here’s what some of them had to say:

“I’d like to say about Questlove winning — he deserved it. He’s from Philadelphia and he’s always been on TV for so many years without getting all of the recognition that was due to him and his band. And it was always through someone else that was bigger and behind someone that was just as talented, but they were always white men.”

“[However], professionally speaking, I don’t think that Will should have expressed himself that way. The physical altercation during the Oscars for the whole world to see when he was given his first Oscar. [It] should have been a moment for him, a once in a lifetime experience, when he got his Oscar.”

“He (Smith) did all of these movies and has been on all of these talk shows, and he’s been a comedian and an entertainer, a dancer and the shows that he’s had, [just] to result in violence. Chris Rock, he was only [being] what he is — a comedian. He (Will) shouldn’t have taken it so [personally]. [There was] another way he could have handled it. I think Chris Rock handled it in a professional way after being slapped. It’s always a time and a place for everything.”

“I follow Twitter a lot. When I heard the story, I actually had a respect for Will Smith until I saw what he had done and I think that was uncalled for. Sometimes you should not let anger get the better hold of you.

So, he destroyed everything that he [has] ever done for himself. He should have never walked onto the stage and smacked him (Chris Rock).”

“I look at it this way  — he’s a major figure (in Hollywood). He’s an actor and you have to take things because you’re a public figure [and all of] that comes with it. They make fun of you. They talk about you. All of those things come with it. You have to take the bad with the good. Smacking somebody like that, I think that was very disrespectful.”

“My opinion personally [is that]I felt that Will Smith should [have] exhibited a little more self-control. I understand being offended by what Chris Rock said. I think he should have spoken with him privately and dealt with that particular issue, especially with that type of event and place.”

“I don’t agree with none of that. I don’t agree with a Black man going up on stage in front of millions of people and slapping another Black man. The man is carrying baggage from his childhood, and he needs to get over it. I was embarrassed myself, and it left a nasty taste in my mouth.

I don’t ever want to see that again. He probably doesn’t need his Oscar rescinded, because he played the part in the picture, and he was selected as the best actor among his peers. So, what he did before is what I’m against. His apology came too late.”