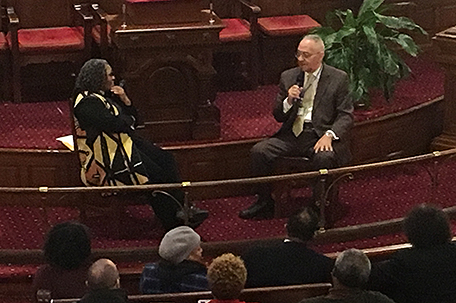 The Black Radical Tradition In Our Time Conference brought together thought leaders from around the country to talk about ways to improve the lot of African Americans.

One of the last things that the Rev. Dr. Martin Luther King planned before his assassination was a Poor People’s March.

The march, which was led by his wife, Coretta Scott King and others after his death, was designed to bring attention to marginalized groups like the working poor, people of color, and others who society decided weren’t important enough to be recognized as human.

As we approach the 2016 Presidential Elections, the same issues that King organized against in the late 1960s are still with us and need to be taken on.

About 2,000 people around the country did just that as part of last weekend’s Black Radical Tradition Conference.

With the theme of “Reclaiming Our Future: The Black Radical Tradition In Our Time”, the conference, which was held at various venues including Temple University, Mother Bethel AME Church, and the Church of the Advocate, brought thought leaders including Cornel West, Angela Davis, and Mumia Abu Jamal together for panel discussions and assemblies designed to discuss and strategize ways to move the Black community forward, said Anthony Montero, a member of the Black Radical Organizing Collective, a group of grassroots organizers, scholars, faith leaders and students.

“We’re in a new stage of the Black freedom movement,” Montero said.

The conference began on Thursday night with the plenary session “The Black Prophetic Voice In A Morally Broken World,” at Mother Bethel AME Church.

The centerpiece of that session, which was basically an interfaith service, was a talk back between the Rev. Dr. Renee McKenzie, vicar of the Church of the Advocate, and the Rev. Dr. Jeremiah Wright, pastor emeritus of the Trinity United Church of Christ in Chicago. Wright, a native of Philadelphia who was President Barack Obama’s pastor, talked about the ways that the Black Prophetic Voice has been muted in the current climate and what can be done to bring it back to prominence.

One of the things that seem to have impacted the Black Prophetic voice is merging of the sacred and the financial, Wright said. Because the media has equated megachurches with Christianity, and those churches tend to focus on a so-called “prosperity” gospel, the true voice of the church is being lost, he said.

“Christianity and capitalism are not synonymous,” Wright said. “The modern gospel tends to focus on “me” rather than the “we”. That’s not Christianity, that’s capitalism. And no one will attack it because we’re not going to attack the system that’s propping us up.”

While the church has used its voice to speak out against things like slavery, poverty and other societal ills, it’s important to recognize that the organized church has never been a place where radical movements begin, Wright said.

The respectability politics of the church are a lot more obvious now, but it’s always been a sign of the times, Wright said.

“The church has always been wishy-washy about things like that,” he said

It’s important for religious institutions to regain their voice when it comes to solving the problems of the world on a political level, Wright said, because history shows us that without the church weighing in on such matters, real change can be hard to come by.

“The church had to have a voice, otherwise we’d still be enslaved,” Wright said.