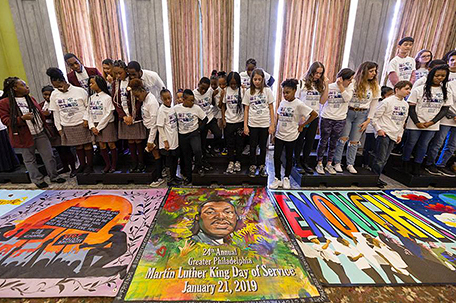 Organizers, sponsors, and community partners joined together last week in a ceremony at Girard College to announce plans for the upcoming 24th Annual Greater Philadelphia Martin Luther King Day of Service. Girard College will serve as the region’s signature project site for the tenth successive year.

Founder and director Todd Bernstein, who is also president of Global Citizen, announced that a national record of more than 150,000 volunteers are expected to participate in more than 1,800 community service projects throughout the region on the Monday, January 21 King federal holiday.

The national King Day of Service was created in 1994 through federal legislation co-authored by former Pennsylvania U.S. Senator Harris Wofford and Atlanta Congressman John Lewis, both veterans of the Civil Rights Movement with Dr. King.

The 24th Annual Greater Philadelphia King Day of Service will focus on young people and the impact of gun violence on communities, finding solutions, and envisioning peace.

Highlighting some 5,000 volunteers who are expected to serve in more than one hundred King Day of Service projects, workshops, and presentations at the Girard College signature project site, Governor Tom Wolf, Mayor Jim Kenney, and U.S. Senator Bob Casey will lead volunteers assembling one hundred anti-gun violence-themed Dream Booth installations, consisting of Dream Booths — portable three-dimensional displays of synthetic plastic pipe and Dreamline Banners — panels of cloth with personal expressions of values and dreams of a world without gun violence, which will be attached to the Dream Booths.

Each Dream Booths Installation will be distributed to schools, community organizations, and public spaces throughout Philadelphia, along with a suggested lesson plan for reflection and discussion.

PECO will present volunteers working with the Red Cross of Greater Philadelphia, who will distribute smoke detectors in the neighborhood surrounding Girard College.

The Cecil B. Moore Philadelphia Freedom Fighters, the group of men and women who demonstrated in the 1960’s for an end to the discriminatory admissions policies at Girard College, will lead a workshop, sharing their experiences in the Civil Rights Movement.

“I am thrilled that my first year joining Girard coincides with a decade of hosting this iconic King Day of Service on our historic campus,” said Heather Wathington, president of Girard College. “I eagerly anticipate the opportunity to share our school and our mission with greater Philadelphia. As we celebrate Dr. King’s legacy, we invite friends and neighbors near and far to visit our renowned Chapel for the Philadelphia Orchestra’s annual concert and to tour our historical collections in the afternoon. This is a great day to serve and to get to know Girard!”

The King Day of Service will host its 8th Annual Jobs and Opportunity Fair, presented by the Urban League of Philadelphia, iHeart Media, and Comcast. Some five hundred job seekers will be choosing among more than thirty local employers and AmeriCorps national service programs. Participants must pre-register at www.mlkdayofservice.org for one of two sessions: 9-10:30 am and 10:30-noon. The Urban League will be presenting job readiness advice.

Philadelphia Orchestra Director of Collaborative Learning, Michael Albaugh, attended the news conference to announce a continuing partnership for the fifth consecutive year, with the Greater Philadelphia King Day of Service and Girard College.  The orchestra, conducted by Yannick Nézet-Séguin, will perform their 299h annual Martin Luther King, Jr. Tribute Concert, presented by PECO, at 1:30 pm in the Chapel, as the concluding King Day of Service event at Girard College. Free tickets are available at www.philorch.org. Patrons may also call Ticket Philadelphia at 215-893-1999 for tickets. Seating will be general admission and is first-come, first-served. Tickets do not guarantee entry and there is a limit of four per household. Doors will open at 1 pm.

Global Citizen, the United Way of Greater Philadelphia and Southern New Jersey, the Urban Affairs Coalition, Knight Foundation, The Philadelphia Foundation, PECO, Serve Philadelphia, DTLR/Villa and Indivisible will present a Civic Engagement Expo that will provide information on the mission and work of dozens of local community organizations and opportunities to volunteer with these groups throughout the year.

Enon Tabernacle Baptist Church will present a Kid’s Carnival for children ages of 5-12 that will include story reading about Dr. King, I Have A Dream mobile-making, skits on Dr. King and civil rights, entertainment and more.  A King Day of Service coloring and activity book will be available for children to learn about Dr. King’s ideals of civil rights and civic responsibilities. City Commissioner Al Schmidt’s office will help future voters try out the first responsibility of citizenship in a demonstration of voting booths used in real elections.

Thousands of students throughout the area are participating in the 11th Annual “One King Day, One King Book” project to encourage children to read, write, and discuss essays about Dr. King. Children submitting essays will receive a King Day of Service certificate.

There will be projects at hundreds of schools in Philadelphia and throughout the region. Volunteers will beautify dozens of Philadelphia Parks and Recreation facilities.  The Philadelphia Fire Department is organizing neighborhood outreach projects on fire safety through all sixty-three fire stations.

Other King Day of Service volunteers will prepare food at homeless shelters and distribute meals to homebound seniors, organize health fairs and legal clinics, and perform plays about Dr. King and his principles of nonviolent social change and racial equality.

The news conference included the unveiling of a dramatic King Day of Service mural painted by students from five-area schools. Mural Arts Philadelphia led the annual project in which each school created a 5’ x 6’ canvas mural highlighting a world without gun violence.

After completing the murals in late December, the panels were attached to form a single, panoramic 30’ x 5’ mural. The mural will be on display January 21 at Girard College.

Updated information on service opportunities is available on Facebook– facebook.com/globalcitizen365 and Twitter– twitter.com/mlkdayofservice. The hashtag is #MLKDAY2019.