A Millennial Voice: Time to Pretend: A Woman’s Dream 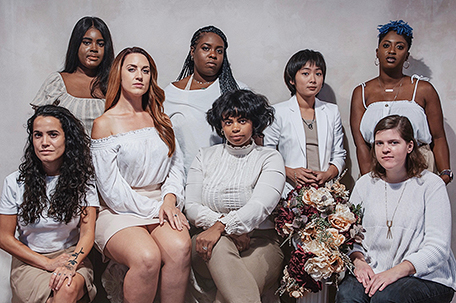 The push for women’s empowerment and inclusion is arguably more comprehensive and relevant than ever before. In recent years, we’ve seen a shift in narrative that has encouraged girls of all ages, skin types, shades, etc. to reclaim their power, and rightfully so. Through the grandiose and the miniscule, activists all over the world have made an effort to contribute to the advancement of women in a variety of ways.

Morgan Smith, (@phobymo), a photographer from Philadelphia, happens to be one of the most prominent change agents that I’ve come across in the city in that regard.

She is one of the most prolific and dynamic photographers in the region, and continues to prove herself by constantly displaying the most breathtaking pieces to her 28,000 Instagram followers. The bulk of her work is geared toward women’s liberation, but she further solidified her position in the fight for women’s equality with the creation of  “Time To Pretend.”

Time To Pretend –TTP for short– is a biannual, all women’s art showcase that’s hosted in Philadelphia. I was fortunate enough to speak with her briefly to get the inside scoop as she embarks on her sixth show, which is  taking place in two weeks.

My name is Morgan Smith and I’m a 29 year-old Black female photographer and curator from Philly. My work focuses mainly on female subjects and my goal is to empower women of all ages and sizes, especially women of color. As a Black female photographer, I feel it is my responsibility to showcase the beauty of the “other” because so many photographers, being that photography is an extremely White and male dominated field, often overlook models who don’t fit into the stereotypical mold of what a model is thought to be.

Why the name “Time to Pretend” ?

I chose the name Time to Pretend for a few reasons. One, it’s one of my favorite songs by MGMT (laughs). Two, the title alone really speaks to this age of social media we’re all living in. Everyone is just out here pretending to have these crazy awesome lives and only showcasing the best parts — meanwhile we’re all busy comparing our lives to everyone else’s and being unhappy with what we have. And three, the overall theme of the song really speaks to a lot of our experiences of being in our 20s and being expected to “grow up”… or at least that’s how I’ve always felt about it. Apparently, the song is actually about some praying mantis they had in their apartment.

When did the idea for Time to Pretend first enter your mind, and how long did it take for the idea to come into fruition? (Was it immediate, did it take you a few years to actually do it, etc?).

In late 2016/early 2017, after seeing a few art shows/project lines up using the same 10-15 artists, I got fed up and decided to start Time To Pretend in March [of] 2017. Philly is a huge city, but the art scene can feel so small because it gets oversaturated with the same group of artists. I wanted to use my platform to expose the city to some amazing new artists who don’t get the same amount of shine as some of the “bigger” artists here.

You’ve curated Time to Pretend to be an all-woman’s art showcase.Why?

A common issue in the Black community, art community, Philly, etc., is a lack of support from our peers; how have you been effected? Have you?

Time To Pretend has been so fortunate to have an extremely loyal and supportive fan base. I have friends (and even some people I don’t know personally) who have come to almost every single show and look forward to it every 6 months. Philly is all about community and I’m really trying to bring that to the art scene here. We gotta go out and support each other!

What is the future is looking like [for the show]?

The future for TTP includes possibly taking it on the road. I’d love to do a show in Brooklyn or LA, potentially starting a magazine or blog. I guess we’ll see!

If you want to see the work of over 25 of the most amazing artists and vendors that this world has ever seen, RSVP at: