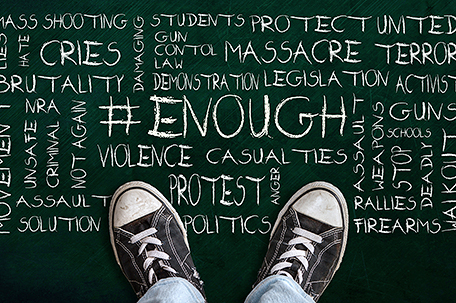 Once again, the City of Philadelphia has been left shaken, but not stirred by the epidemic that is gun-related crime. The renowned metropolis coined “The City of Brotherly Love” seems to be quite the contrary as of late due to a rise in unrelenting gun violence.

The mouths and minds of those residing in the United States have started considering gun-control as it’s become a conversation piece for the smart, the not-so-smart, and everyone in-between. Everyone is talking, but no one can agree.

As of June 25, approximately 580 shooting victims have been identified in the city, refuting the famed phrase, “It’s Always Sunny in Philadelphia” significantly. The problem of gun-violence in Philly is axiomatic, but identifying a solution has proven to be the opposite.

Last year, the Philadelphia streets housed more carnage than the city had seen in over a decade, prompting Mayor Jim Kenney to create a comprehensive plan called The Philadelphia Roadmap to Safer Communities.” Kenney’s proposal has a surfeit of moving parts and suggests that we instead view the problem as a public health crisis and not an issue for police to handle alone.

Other organizations in the city have made an effort as well… The list includes but is not limited to: Drexel University’s Center for Nonviolence and Social Justice, the Philadelphia Collaborative Violence Prevention Center, and Temple University’s Cradle 2 Grave program.

During my tenure at West Chester University, I took a class called “Race and Poverty” where I learned how much  it affects the psyche of those living in it. Amongst other topics, the course explained how/why the monstrosities that we’ve seen are more likely to occur in cities with a higher percentage of people of color. According to the Pew Charitable Trusts,  Philadelphia has the highest poverty rate among this country’s top 10 largest cities at about 25.7%.

Poverty and trauma predictably go hand in hand, which may explain why violence in Philadelphia is such an issue. In impoverished areas where people are often left hungry, this usually leads to poor school/work attendance and bad grades, low property taxes and inadequate public schooling, (only 2% of of children in poverty are sent to schools with high achievement ratings). They’re also more likely to witness violent crimes,  which makes them more likely to commit crime as well, and the list continues.

The apex occurred a few weeks ago during Father’s Day weekend. 32 people were shot and five were pronounced dead during one of the city’s most violent weekends thus far. Members of the community attest to being afraid to even go outside anymore and visitors are shying away from the popular tourist attractions the city has to offer.

I am not from Philadelphia, so I can only imagine the pain the community must be feeling. In an effort to get a better understanding, I reached out to my network and was fortunate enough to get a great response. Philly native, Quaadree Harris is a new father and finds himself frightened by the current state of the city.

“Violence in this city has made me paranoid that I might be taken away from my son in some random act of violence,” he said. “A year ago, I never saw a need to own a gun, but after seeing all the killings in no-gun zones, I’m applying for my gun license… There’s no peace of mind as a Black man in this city, even if you’re not in the streets.”

In order to lessen gun violence in Philadelphia, all persons inhabiting the city need to be in agreement that there’s an issue. The community must be dyed-in-the-wool to both uncovering and understanding the “why” and the “how” for any resolve to come. Gun violence in the city is much deeper than just “immoral” vs “innocuous”; however, due to the nature of the circumstance, that awareness alone is not enough for the malady to cease fire. Literally.

The seams of Philadelphia’s once polished petticoat have been abraded, but with work, it’s my hope that the issue can be resolved. Until the response to “Philadelphia is the city of brotherly love”, isn’t met with the phrase, “on the contrary”, we must all do more.