A Matter Of Wills 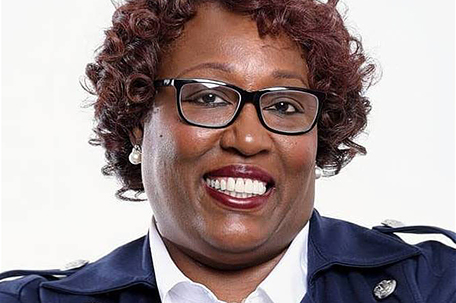 In her first 100 days as the City of Philadelphia’s Register of Wills, Tracey Gordon has been helping city residents do the things they need to do, pandemic or no.

You wouldn’t expect marriage to be the first thing that comes up in a conversation with the City of Philadelphia’s Register of Wills.

But when I sat down with new Register of Wills Tracey Gordon, it’s where the conversation started.

Not a lot of people know that the Register of Wills handles marriage licenses, Gordon said. In fact, most Philadelphians probably discovered that the office performed that function when, due to the coronavirus pandemic, Gordon announced that her office would be making “Quaker marriage” licenses available for essential workers and others who needed a ceremony performed due to a medical emergency. “Quaker marriages” which are based in Philadelphia’s Quaker tradition, can be performed without an officiant, Gordon said.

Once someone goes online to fill out the paperwork, they then have to send it to the Register of Wills with a check or money order, she said. An online payment option is coming as well.

“We were the first to do virtual probate and virtual marriages,” she said. “I didn’t want anyone to have to call an elected official or expose themselves to the coronavirus for this. New York is doing virtual marriages now.”

But while Gordon is more than happy to be a part of the love and happiness of marriage, she’s also thinks that couples need to understand that there is more paperwork involved than the license itself.

“I want to start educating people on the business of marriage,” Gordon said. “People know all about the love part, but marriage is also a business. It’s a contract. It has everything to do with property and children.”

Helping people become more aware of contracts like marriage, wills and housing titles are just some of the things that Gordon has been taking on since becoming Register of Wills in January. Despite having to deal with a pandemic during her first 100 days, she has managed to put together some programs that have been duplicated other places and has moved toward being an office that no one knew much about become more accessible to the public.

The SUN spoke with Gordon about her first 100 days, some of the changed she’s made to the office, and why she’d like to make sure you can see William Penn’s will.

SUN: Thanks a lot for giving us some of your time, Ms. Gordon. You’ve been the Register of Wills for 100 days now. What would you say has been the biggest surprise about the office and what’s been your biggest challenge?

TG: The biggest surprise has been the pandemic, which led to my biggest challenge, believing in my thought process. We had to collaborate to work from home and it took us a week, but we decided that as a team that we could do this.

SUN: How has your office managed to do everything it does from home? You handle a lot of important things that you kind of have to do in person. How are you doing that?

SUN: You are the first new Register of Wills in Philadelphia County in 40 years. What changes have you made to the office? How have those changes worked out?

TG: In addition to bringing more diversity to the office, a couple of the more important things we’ve done have been related to probate. In addition to allowing people to do emergency probate matters online because of the pandemic, I no longer allow attorneys to make the decisions when it comes to probate. My name is going to be on the decision, so I want to make it. It’s just common sense.

We’ve also stated deferring probate fees. These fees can run anywhere from $400-$500 and that’s too much for some families, so it becomes a hindrance to getting things done. I don’t have the authority to waive them, because that comes from the state, but I can help that way.

SUN: Mayor Jim Kenney had to make a lot of cuts in his 2021 fiscal year budget because of a $650 million hole in the city’s budget caused by the coronavirus. How has that impacted your department?

TG: We had to reduce our budget because the cuts impacted everyone. But we’re self-sustaining. So it didn’t hurt us that much.

SUN: One of the phrases you introduced us to when you were on the campaign trail was the phrase “tangled title.” This is when someone passes away and such things as who inherits the family home can’t be completely figured out because it’s not clearly delineated. Have you been able to work on that?

TG: Yes, I have. I’ve been working with Community Legal Services, the Senior Law Project and the Christian Law Service on this. I’ve already been fighting to fix this for years, because your home is your best source of generational wealth. If you’re not in a tangled title situation, you know someone who is. If you don’t have a will, this can happen and have consequences, especially for those in poverty.

SUN: For a while, former Councilperson Blondell Reynolds Brown was working on a historical preservation project for you. Can you tell us a little bit about it?

TG: The Register of Wills has the largest collection of archives in Philadelphia County. We have William Penn’s will, the Girard Will and Trust, and other important historical documents. We have documents everywhere, including the City Archives on Spring Garden Street. My background is in insurance and risk management, so I needed someone that had a background in document preservation and history who could also get the attention of state and local lawmakers to get the money for our preservation efforts. I had been following Councilwoman Brown throughout her career and thought that because of her interest in art and art preservation and the relationships she had, that she’d be the best person for this. It just didn’t work out.

SUN: If people want to contact the Register of Wills, how would they go about doing that?

TG: If people need to contact us, you can call us at 215-686-6250. Our website is www.phila.gov/wills and you can email me at [email protected]. You can also find us on Facebook at PHLROW and Twitter at: @phlrow.

I want to put the Register of Wills office on the map so that people can protect themselves and their homes and by extension, our neighborhoods.

SUN: Thank you for your time, Ms. Gordon. I appreciate it.