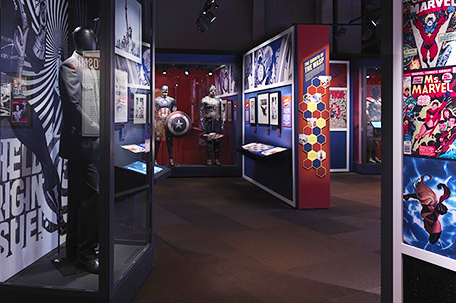 On the occasion of the entertainment juggernaut’s 80th anniversary, the new exhibit, ‘Marvel: Universe Of Super Heroes’ gives fans of superheroes the chance to see them up close.

Over the last 10 years, the films of the Marvel Cinematic Universe, the Marvel shows on Netflix, and the ABC television hit “Marvel’s Agents of S.H.I.E.L.D. have made the Marvel brand ubiquitous.

But before the movies and television shows, there was a series of characters that told stories of the natural and supernatural that in many ways served as parables for the kinds of things we don’t necessarily want to talk about.

A new exhibit at the Franklin Institute Science Museum on the Benjamin Franklin Parkway here in Philadelphia gives you a chance to see the creativity of the World of Marvel up close.

The exhibit, “Marvel: Universe Of Super Heroes,” opened on April 13 and continues until Sept. 2 at the museum. It celebrates Marvel’s 80th anniversary, and is a mixture of the old and the new, said Ben Saunders, the exhibit’s curator.

“Our show begins with the origins of the Marvel Universe and moves through to the present day, giving a chance to see some of the rarest and most precious objects from the past 80 years of pop culture history, and pointing toward the future with work from some of today’s foremost creators,” he said.

And Saunders isn’t kidding. After viewing a short film about the origins of Marvel, the entrance to the exhibit features the first Marvel comic ever published, which featured an android version of the Human Torch and Namor, The Submariner.

If you’re a fan of Marvel Comics, or just a fan of the films and TV shows, you’ll find a lot to like here. There’s figures of your favorite characters —- most notably, The Thing from “The Fantastic Four,” The Hulk, Spider Man, and The Black Panther —- that you can take pictures with.

But what I liked most about the exhibit was the chance to check out Marvel’s history. For example, you’ll see some of the original artwork from Marvel illustrators like Jack Kirby, Steve Ditko, and Frank Miller, as well as illustrations of characters like Black Panther, Captain America, the Fantastic Four, Iron Man, Spider Man, and Nick Fury, who looked nothing at all like Samuel L. Jackson when he first appeared in the Captain America comics.

You’ll also see a lot of the props from films in the Marvel Cinematic Universe. Want to see the first “Iron Man” suit? It’s here. How about the Tesseract, one of the Infinity Stones? It’s here too, Ruth Carter’s Oscar-winning costumes from “Black Panther,” the set drawings from the film, and film cells? They’re here too.

There are also interactive panels that allow you to see how a comic page is drawn, inked and turned into the comics themselves, as well as the histories of the various comic book heroes and villains.

But one of the centerpieces of the exhibit is a salute to the late Stan Lee, the mastermind of the Marvel Universe that includes a video tower of all of Lee’s cameos in MCU films.

“Marvel: Universe of Super Heroes” is open from Monday to Sunday from 9am-5pm (last entry at 3:30pm) and tickets are $35 for adults, $31 for children aged 3-11, and $12 for Franklin Institute members. Museum admission is included with these tickets.

If you want to do a date night and see just the “Marvel” exhibit, the museum is open from Thursday-Saturday from 5pm-8pm (last entry at 6:30pm). Tickets are $20 for adults, $15 for children aged 3-11, and $12 for members. Museum admission isn’t included with these tickets.