A man of science 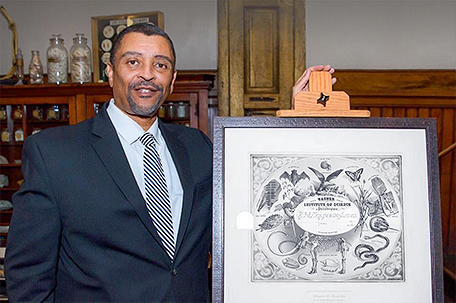 For 136 years, the Wagner Free Institute of Science has been located at the corner of 17th and Montgomery Avenue in North Philadelphia.

Created during another time in America’s history when the discipline was seen as suspect, the Wagner Free Institute was, and still is, a place where the common man and his children could learn about the world around them.

And because the classes were free, it wasn’t out of the reach of people who couldn’t necessarily afford a formal education, said Susan Glassman, executive director of the Wagner Free Institute.

“The original classes were held at night so that working people could come,” she said. “We’re committed to making it accessible to people, no matter who they are.”

But honoring that commitment to keep science accessible to all without regard to cost requires a little help. That’s where North Philadelphia-based Beech Companies and its president and CEO Ken Scott come in. For the last 30 years, Beech has partnered with the Institute to do the GeoKids program.

Beech provided the seed money to start the program, which connects North Philadelphia’s school children with the resources of the Wagner Institute.

Through GeoKids, Beech has helped the Wagner Institute work with more than 1,000 kids in five North Philadelphia elementary and middle schools each year, Glassman said.

It was also through GeoKids that Scott, an engineer who has worked with NASA’s jet propulsion laboratory and served as a member of the White House’s Advisory Board for Technology In Education during the Obama Administration, connected with the Wagner Institute.

He’s been a big fan ever since.

Last Friday at the organization’s annual “A Sip Of Science” benefit cocktail party, the Wagner Free Institute of Science named Scott an Honorary Fellow of the Institute for his contributions to advancing science and science education. Scott joins a distinguished list of scientists including Derrick Pitts, the Franklin Institute’s chief astronomer in receiving the honor.

Having worked with Scott extensively with GeoKids, his commitment to bringing science to those who might not otherwise have access to it made honoring him with this award very easy, Glassman said.

“We’ve gotten to know Ken very, very well,” she said. “He’s an extraordinary person who does embody the spirit and a commitment to education to this community. And he loves science.”

Scott’s love for science was something that he picked up at a very young age through a family that encouraged him to make discoveries.

“I’ve always been interested in tinkering,” Scott said. “My grandparents were always mechanical. And they were engineers. One of my grandfathers was the first black machinist at the [Arco] Richfield refinery. I could repair a television by the time I was 10-years-old. It was my natural curiosity to see how things worked that just kind of developed.”

That natural curiosity led to his heading to Penn State to study engineering, followed by studies at the University of Pennsylvania and Oxford University. Scott went on to work with Honeywell and has also worked with NASA’s jet propulsion lab. He’s also worked with the creators of the computer apps Zoom, Cash App and others.

While Scott is best known in Philadelphia for his work with Beech, he began working with the company as a volunteer for GeoKids while working as manager of engineering construction as PECO. Because of his interest in trying to connect Black children in the School District of Philadelphia with engineering and science, Beech founder Floyd Alston thought volunteering with GeoKids would be a good way to make that happen.

He’s hoping that the program continues to help young people connect with science.

“I’m just thrilled to be supporting the Wagner and all that they have done,” Scott said. “And Mr. Alston, he would be thrilled that 30 years later that the GeoKids program is still going strong. Hopefully, it’ll continue for another 30 years.”

Beech president and CEO Dr. Kenneth Scott to be honored by Wagner Free Institute of Science

More than $30,000 in funding to support local nonprofits through the holiday season