A giant of a man with a big heart to match: Sultan Ahmad has made transition 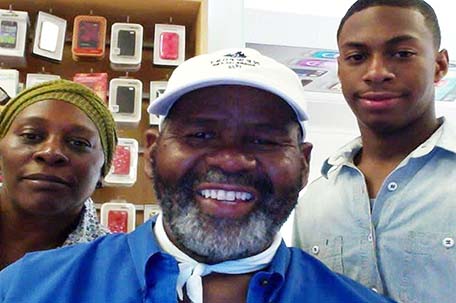 “The outpouring of love and sympathy my family has seen since my father made transition last week, touches our hearts. I always knew my father was well respected. I knew he did great work for the city and with our nonprofit. But for me, he was my Dad. I loved him. He was my personal hero. Now I understand, he was a hero to tons of people, not just to me,” Samir Ahmad said of his father. “He taught me many things, but living without him is going to take some healing time.”

“The relationship I had with Sultan was primarily based on our work in the movement,” he said. “Initially, it was just the idea of getting Philadelphia prepared to elect a Black mayor. I was involved in the draft Wilson Goode movement and a lot of other things that helped prepare our community through voter registration and other kinds of things for a Black mayor. I met Sultan through Wilson’s first campaign to be mayor. He [Sultan] was an activist in North Philly in the vicinity of 23rd and Ridge. They used to call him “Big Hern” back then, and everybody knew him.”

Sultan had a presence, and anybody who knew him, knew that,” Certaine said.

“Our core crew then was Sultan, John Myers, Umjassi Kentu, Brother Fareed Ahmad, Jewell Williams and myself,” Certaine continued. “It was a labor of love and done by people who were credible activists in their own communities. A lot of other people got credit for what took place, but actually it was people like Sultan Ahmad who organized at the grassroots level to make sure people understood the importance of what it was we were trying to do.”

“Sultan was a very capable administrator,” he said. “With Sultan, you had a combination of activist, politician, and administrator all rolled into one.

Mark Wilson says he knew Sultan Ahmad all his life, first as a family friend and later as a mentor.

“He helped me get a job with the city, working in the parking authority,” Wilson said. “After being on the job for a while, I earned a promotion and Sultan started inviting me to accompany him to important meetings with city officials.”

Wilson recalled a meeting they attended during the Septa El revitalization project.“We got there early, and while there was a long table with chairs around it, I didn’t sit there,” he said. “I took a seat in the back of the room. Sultan, of course, had sat at the table. He turned around and looked at me and said, “What are you sitting back there for? Whenever there’s a seat at the table, you take it.’ And I moved to a seat next to him. After that, any meetings I attend, I always make sure I have a seat at the table. I learned that and so much more from Brother Sultan.”

Bilal Qayyum and Ahmad had a friendship that spanned over fifty years.

”I’ve known Sultan going back to when he was in the Black Panther Party in the city of Philadelphia, where he was very active in the community,” he said. “I’m saying this next statement in a very positive way, [but] Sultan has to be one of the biggest hustlers that I’ve ever known, in a positive way. He was always making money, focused on making money to help his family. Sultan used to sell suits. Sultan probably was the originator of hacking, (using his personal vehicle like a taxi cab).  Then he got involved with politics. Sultan was someone who, even after losing his son almost 29 years ago, still maintained, and with his wife Harriet, started the Sultan Jihad Ahmad Community Foundation. Sultan’s passing is a big loss for the city of Philadelphia.”

Sultan joined the Black Panther Party chapter located  in North Philadelphia in 1969. He served as the captain of that chapter before leaving to manage Bobby Seale’s mayoral campaign in Oakland, California

Sultan was instrumental in the founding of the National Alumni Association of the Black Panther Party (NAABPP) in 2011, which was chartered in Philadelphia. He served as the 2nd president of that body for two terms.

Center located at 22nd and Cecil B. Moore Avenue.

He served as the executive director of the Mayor’s Office of Community Services (MOCS), and administered a staff of 225 with a $9 million dollar budget to help fight the “War on Poverty.”

Sultan was also the first deputy executive director of the Philadelphia Parking Authority.

He oversaw a multi-million-dollar operation, managing on average the parking of 17,000-vehicles daily. Ultimately, he was appointed acting executive director, where he worked up until his retirement.

Sultan was also co-founder of the Sultan Jihad Ahmad Foundation, along with his wife of 43 years, the love of his life, Harriet Ahmad. They started the foundation after the murder of their son Sultan (Sudee) Jihad Ahmad on April 20, 1992. That nonprofit has been credited with helping to save the lives of hundreds of youth who were beneficiaries of the many programs the foundation offered over the last 28 years. He is survived by his wife Harriet, his son Samir, 12 grandchildren, siblings, and a host of other loved ones. His Janazah Prayer took place at the Liacouras Center on the campus of Temple University on November 29.