A gem polished by life lessons 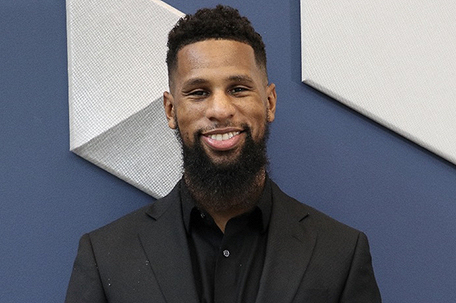 I was first introduced to Nafees Norris when I learned that the 26-year old North Philadelphia native was the first African-American student accepted into Thomas Jefferson University’s Biopharmaceutical Process Engineering master’s program.

In the process of interviewing him, it soon became evident that getting into this prestigious program was only scratching the surface of this multi-layered young man — his tenacity, faith, affable attitude towards life and spirit of gratitude no matter what he faced made him far more interesting than what is being covered by the press regarding his stunning accomplishment. He deserved a more in-depth conversation, and it is one he willingly gave with a humble heart.

It is important to note that Norris continues to face financial hardships despite all he has achieved and could use the love and generosity of those who may read this article..

ALS: Describe who you are, and when you first became interested in science.

NN: How would I describe myself? That is honestly a tough question for me to answer, because I never want to come off cocky or arrogant. However, I will say in the most confident way that I am a man who loves God, a man of faith first, family- oriented, resilient, optimistic, and someone who naturally gravitates towards the more challenging things of life.

I first became interested in science at the age of 7-years old. I remember studying plants in my first-grade science class, and to be honest, we did not have many resources growing up in the Philadelphia public school district, so I took it upon myself to get some “hands-on experience”. I remember up the street on the same block of where I lived there was an empty lot.

The empty lot consisted of just weeds and dandelions to be honest — not much more — and I remember just going into the lot by myself to look at plants and to see if I could discover anything new or different from what we were learning in class. It was then while looking at the plants, I received a wonderful cut on my middle finger. Now most 7-year (old) children would see blood, run home, tell their mom, cry and get a band-aid right? Me, nah. I wanted to study my own blood and I found it so interesting just looking at it and asking questions like, ‘Why is it this color?’ ‘Why is the blood this thick?,’ and even, ‘How can I stop it?’ I knew then at age 7 [that] I wanted to do something in the sciences, but I did not know what or how. But I knew I wanted to do this.

ALS: Describe your pivotal memories of high school and what made you decide to go to the Community College of Philadelphia.

NN: Honestly, the most pivotal moment in high school for me came my freshman year at my first track meet at Lehigh University. I remember I ran the 400-meter dash, and I came in dead last running a sad time of 1:06.68.

In fact, I ran so poorly that my teammates, as a prank, matched up my time with the women’s results and said I would have come in at about 10th place out of the women’s race.

I kindly went and found a corner and sat alone and cried in anger. However, my high school coach of all four years — Lynette Matthews — came over to me and told me a story about the great track and field runner by the name of John Drummond who did not make the high school, and college team relays but made the Olympic relay team and won Gold. Now, I was wondering— what in the world does this have to do with me? Coach Matthews taught me a lesson that day, I would never forget. She taught me “The later, the greater”; that things may not work out at first, but if you keep going things will work out in your favor. Also, sometimes things given too soon will not last, but when earned later in life, the reward is much more fulfilling.

I now know that the scripture Romans 8:28, “And we know that in all things God works together for the good of those who love him, who have been called according to his purpose” applied to my life more than ever.

Many people think I went to the Community College of Philadelphia (CCP) straight out of high school, but that was not the case. I lost all my scholarships from track and field and even tried training afterwards, but [I] repeatedly pulled my hamstrings and so I thought it was over. I gave up on college and then tried to do things on my own.  I ended up homeless for a period, worked at McDonald’s and just became fed up with everything and decided it is time to make something of myself. So, with only a negative $21.79 in my Citizens Bank account, I applied for Community College. By God’s grace, it worked out ever since.

ALS: What did you encounter at CCP that made you work harder?

NN: I remembered when I was sent to see my academic advisor my first semester at CCP, and I remember failing algebra with an “F.”  I remembered sitting in the office and my advisor saying to me plainly, “Nafees, I don’t think you are cut out for the sciences.”  I stood up, looked her dead in the eye and said, ‘I am going come back in four years and slap my degree on your desk!’ I walked out and later passed algebra with a B -. To be honest, I am the type of guy that if you tell me I cannot jump 10 feet, I will jump 12 feet and turn around and smile when I am done. So that is all the fuel I needed, to be honest.

ALS: What relationships did you develop along the way, and in your estimation, why they were important in your trajectory?

NN: My parents — Barry and Michele Norris — my brothers Faheem, Askia and Sharif Barnes, Coach Lynette Mathews, Elder William Hatcher, music producer David Joseph, Pastor Lawrence Matthews, Dr. William Heron, Dr. Cameron Bardliving, Coach Nicole Crawford, and Pastor William Brownlee. In all honesty, I could go all day telling stories about how they each played a huge part into my getting to where I am now, but there is not even enough paper in the world to do that. However, I will say that each person named has pushed me to be my best in every aspect of my life, whether it be spiritually, physically, mentally, and emotionally. They have all pushed me to be the best I can be, and have kept me humble in the process! God has placed every one of these individuals in my life purposefully and I am thankful for them everyday.

ALS: How did you end up in this master’s program?

NN: Back in January of 2020, [on] the first Saturday of the year, I was invited to be an extra in a church play. However, that morning my then-girlfriend broke up with me.  I was just heartbroken and distraught, and I was not going to go attend the rehearsal. I called the director of the rehearsal, Ms. Carla Greene, and told her I was not coming. I remember she said to me plainly, ‘Nafees, I don’t know why, but I feel something is pulling on me to tell you to get here.’ Ms. Carla prayed with me at 7:30am in the morning. So I got up and drove to rehearsal and the first person I saw walking in is my former pastor Lawrence, and I remembered him saying ‘Hey son, you still in the science thing?’ I said, “Yes sir,” laughing. He then introduced me to Dr. Cameron Bardliving. Before he even spoke two words to me, he was already a hero because I had never met a Black PhD doctor before in science.

Dr. Bardliving invited me up for a tour of the laboratory up at Jefferson Institute for Bioprocessing and the tour turned into an interview, and two weeks later I am accepted into the school. Mind you, I only had a 2.81 GPA, but when God has favor over your life, you can go from getting denied to approved, in the blink of an eye. I have since learned that that [the] “yes” came because while I had 2.81 GPA academically, I had a 4.0 in work ethic, networking and determination.

ALS: What would you say to adults and children now, based on where you are today?

NN: The advice I would give to adults and children is honestly simple. In my life, I have learned that when you put God first and work hard at your craft, your “dreams” will never come true –something greater will.

For more information, Nafees Norris can be contacted at: [email protected], or via Instagram at:@nafeesnorris.

Cameron and Lauren share lessons, life after ‘Love Is Blind’