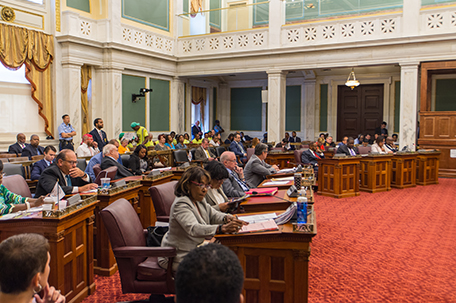 At Thursday’s first session of Philadelphia’s new City Council, the Homestead Exemption returned, and the city is looking for a lawyer to help with its gun violence problem.

Sure, the inauguration was actually the first meeting of Philadelphia’s new City Council.

But now that the pomp and circumstance is over, the real work begins and it began in earnest on Thursday morning when Council was gaveled into session at City Hall.

And the city’s gun violence problem was the top issue on the list. In the first 22 days of 2020, 32 Philadelphians have lost their lives to gun violence and City Controller Rebecca Rhynhart has issued a report showing how the city spends its anti-violence funds.

But Council isn’t waiting around. During Thursday’s meeting, Council Majority Whip Curtis Jones and Councilmember Kenyatta Johnson, co-chairs of the special committee on crime and violence, introduced a resolution that would allow the body to retain legal council for the purpose of suing the Commonwealth for standing between the city and common sense gun legislation.

The city has had enough of Harrisburg’s inactivity, Council President Darrell Clarke said.

“People in Philadelphia are tired and frustrated with gun violence happening every day in their neighborhood,” he said. “We must take action and we need every responsible elected official on deck.”

While fighting the Commonwealth’s gun laws is a big part of Council’s plan to fight gun violence, it’s not the only part, Johnson said. The special committee on gun violence held it’s first meeting on Friday and the discussion was wide-ranging, he said.

“Everything was a part of the discussion,” Johnson said.

The committee hopes to have a discussion with incoming police commissioner Danielle Outlaw soon to discuss what part she can play in helping foster the one thing that would make the city safer: a trustworthy police force, Johnson said.

“We have to improve the relationship between the police and citizens,” he said. “Citizens won’t come to the police with information about a crime if they don’t trust them. We need that if this is going to get better.”

In other council news, several bills that were passed last session, but didn’t become law due to a pocket veto from Mayor Jim Kenney, were reintroduced on Thursday. Among those bills was an increase in the Homestead Exemption. Under this bill, the amount of money that a taxpayer could deduct from their home’s taxable portion would go up by $5,000 from $45,000 to $50,000.

Last session, the bill passed unanimously, but Mayor Kenney refused to sign it, opting instead to let it be part of the budgetary process.

The bill’s sponsor, Councilmember Johnson, believes he has the votes to get the legislation, which would benefit 220,000 Philadelphians, passed, he said.

Also, Councilmembers Helen Gym and Bobby Henon introduced a bill that would put the charter change needed for the creation of a permanent Department of Labor and Board of Labor Standards on the April 28 primary. This department, should the charter change pass, would enforce new and existing city labor laws, resolve disputes, and oversee sexual harassment and discrimination cases. It would also have investigatory power.

Philadelphia City Council will meet again on Thursday, beginning at 10am.