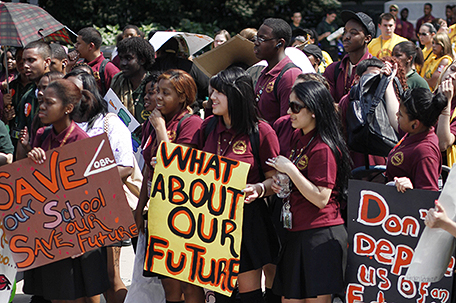 ABOVE PHOTO: Students rally against proposed reductions in state funding for schools, Wednesday, May 25, 2011, outside City Hall in Philadelphia.   (AP Photo/Matt Rourke)

Thanks to a chaotic budget situation, summertime for School District of Philadelphia parents is going to be anything but easy.

Or Newports. Or Camels.

That’s because all that stands between the School District of Philadelphia, 1.300 layoffs, and a late start to the school year is a $2 a pack cigarette tax that if passed would only provide a band-aid, and a small one at that, for what is fast becoming a near-fatal gaping wound.

When the late Arlene Ackerman, former Superintendent for the School District unveiled her Imagine 2014 program, chances are that this wasn’t what she imagined.

“The issue of school funding is a long time issue,” said Sandra Dungee-Glenn, former chair of the School Reform Commission. “But I don’t remember being as bad or dire as it is now. What we’ve been witnessing over the last four years is the defunding of education and it’s put the district over the edge.”

In order for the school district to open as scheduled on Sept. 8, the district must first close a $93 million hole. That’s the minimum needed to open the district at last year’s staffing levels, said Fernando Gallard, a spokesman for District Superintendent William Hite.

The tax had been passed by a majority of the House and Senate on July 2, but the bill was reopened and a variety of amendments including things that had nothing to do with funding city schools and a five-year sunset provision have been added to it, said Jay Pagni, a spokesman for Gov. Tom Corbett.

If the bill is passed without these provisions on August 4 when the legislature comes back into session, the School District could see $45 million in tax revenues, Gallard said.

If it doesn’t pass is something that no one wants to think about, said Shanee Garner, co-education director for Public Citizens for Children and Youth, a local education think tank.

Closing a $93 million hole require a lot of cuts. About 130 Special Education aides, including aides that work one-on-one with students, got their pink slips last week. Without that $45 million, 1,300 more district employees will join them, Garner said.

“We’re going to see a ripple effect,” she said. “We’re not going to be able to open schools in the fall and you’ll have 130,000 kids on the street and 130,000 families without supervision for their kids. Philadelphia will be in the news for all of the wrong reasons.”

“It’s hard to believe that $50 million would keep schools from opening,” he said. “The possibility of schools not opening over a small amount of money over what’s been allocated in the budget is concerning to us.”

This is the second year in a row where the school district has been hit with a deficit that threatens the start of school. Last year, despite closing more than 30 schools and borrowing It has been closed in the past by a 1 percent sales tax, an increase in the business use and occupancy tax, and an awful lot of borrowing.

This year, the sales tax was renewed by City Council, but after the first $120 million, the rest goes to fill another entity operating at a deficit, the city’s pension fund.

“The city has increased its support to the School District over the last five years by $300 million annually,” she said. “We’ve taken on a lot of the burden to keep the school district afloat.”

But while the state and the city debate whom should do the heavy lifting for the district, some parents, like Helen Gym of Parents United, are calling for a pox on both their houses.

“City and state officials have let Philadelphia’s schools down,” she said. “I no longer think about who has doing worse by us. They’re both letting us down and who suffers is the kids.”

While Philadelphia might be the biggest name on the Wall of School Funding Shame for the Commonwealth, the issue of funding and how districts are being impacted has led to a discussion that everyone has been begging to have: the discussion of a consistent funding formula for schools.

Gov. Corbett has appointed a panel to begin looking at that issue, Eller said. The body is to begin its work next month.

But if how Gov. Corbett has conducted himself when it comes to school funding is any indication, Dungee-Glenn isn’t encouraged. During Gov. Ed Rendell’s administration, a funding formula that came close to giving districts what they needed was in place. This represents a desire to reinvent the wheel, she said.

“Past practice is the best predictor of future behavior,” Dungee-Glenn said. “Because of that, I have no confidence in this. But, I would love to be surprised.”