A few minutes with Santigold 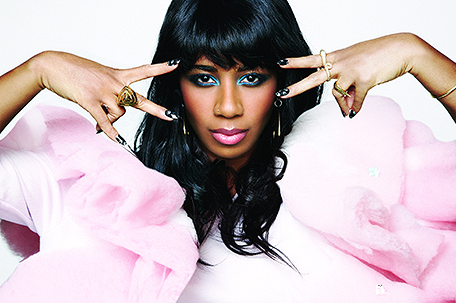 Whether or not we want to admit it as a city, Philadelphia is probably as well known for it’s contributions to music as it is for cheesesteaks and soft pretzels.

From Kenny Gamble and Leon Huff’s Sound of Philadelphia to The Roots, Philadelphia has contributed a lot to the world’s musical landscape.

Adding to that landscape is Santigold.

The Philadelphia native, a graduate of Germantown Friends Academy and Wesleyan University started out as an A&R person for Epic Records before leaving that job to produce the album “How I Do” Res. She then went on to become the lead singer for the punk band Stiffed and has also released two albums, “Master of My Make Believe” and “.99” She has also worked with a variety of artists including GZA of the Wu-Tang Clan and Kanye West.

Santigold was in town recently as part of Jack Daniel’s Tennessee Honey’s Neighborhood Flavor. This is a collaboration with Roc Nation designed to showcase the journey that an artist makes from his or her hometown to the performance stage. She performed at a Neighborhood Flavor block party held at the Piazza at Schmidts.

The SUN spoke with Santigold about her career, her music, and how Philadelphia has influenced both.

SUN: Thank  you so much for your time. My first question is, When did you know that you wanted to be an artist? I understand that you studied music and African American studies in college. Did you consider doing anything else?

SAN: I’m not sure I ever wanted to be a recording artist until, one day I just was one. I was always just driven by the desire to bring my ideas to life. And wherever that led me, that’s where I ended up.

SUN: As a city, Philadelphia has a thriving music scene. Where do you think you fit in within it and how has it influenced you? What artists do you listen to?

SAN: I’m not sure that I ever necessarily fit in with Philly’s music scene, other than fitting in with the city’s legacy of producing important artists. The best thing Philly did for my music was to give me the space and peace of mind to find my voice, at a time when I couldn’t find those things in NYC.

SUN: If there were an artist you wanted to pattern your career after, either alive or dead, who would that person be, and why?

SAN: I try to focus on what my own unique experience is and stay open to that journey.

SAN: My greatest achievement has been to keep pushing boundaries, forcing people to question their definitions. My biggest challenge has been that same exact thing.

SUN: If a student from your alma mater, Germantown Friends, came to you and said, “I want to be a musical artist”, what advice would you give them?

SAN: I’d say go do it! Don’t take no for an answer, and follow your own voice.