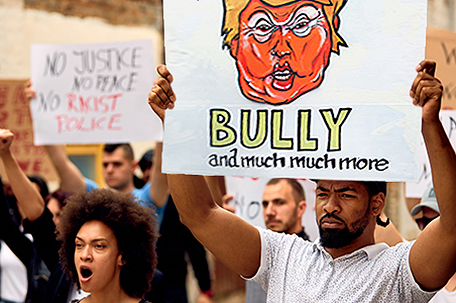 Just in time for Campaign 2020, President Donald Trump is using his bully pulpit to inspire, and well, bully…

“Has Bubba Wallace apologized to all those great NASCAR drivers & officials who came to his aid, stood by his side & were willing to sacrifice everything for him, only to find out the whole thing was just another HOAX? That & Flag decision has caused lowest ratings EVER!”

In case you’re wondering where that stream of unconsciousness came from, that was yet another example of how Twitter DOESN’T enforce its terms of service from the Twitter account of Donald Trump, the person currently occupying the White House.

His issue with Bubba Wallace, the only Black full-time driver on the NASCAR circuit, was not so much about Wallace himself, but about the noose that was found in the garage assigned to him at the Talladega Motor Speedway in Talladega, Alabama during the Talladega 500 race.

Now the FBI, the law enforcement agency designated by our government to investigate bias crimes despite doing a usually abysmal job of it, said the noose, which NASCAR later released a picture of, was just a pull rope for a garage door. But the automotive governing body, which had already shocked the hell out of all of us by parting company with the Confederate Flag, took it so seriously that a group of Wallace’s fellow racers showed their unity and support to him once the noose was discovered.

Even racing legend Richard Petty, who owns the #43 car Wallace uses to race — and who once raced using that number himself — stood by his driver, attending the first race he had been to since the pandemic to root for him.

Now, many people might have looked at all of the race drivers bringing Wallace’s car to the front at Talladega as too much hoopla for something that wasn’t that big a deal.

But in an America where the President of the United States speaks more passionately about the removal of Confederate statues than he does the preventable deaths of more than 130,000 people from a virus he lacks the willingness to control, that attitude isn’t much of a surprise.

I mean, hey, when your first political endorsement comes from the former Grand Dragon of the Ku Klux Klan, you’ve got a reputation to protect, right?

According to the Washington Post, six people have been found hanged in America since May. While most of them have been classified as suicides by police, it’s not an assessment that Black folks necessarily take at face value because, well, we’ve had some experience with nooses.

A more recent example of Nooses Gone Wild comes to us from Vice President Mike Pence’s home state, Indiana. Vauhxx Booker, a member of the Monroe County Human Rights Commission in Indiana, said that he was pinned to a tree and beaten by a group of White men on July 4 when the group accused him and a friend of trespassing.

According to an interview he did on NPR, Booker said one of the men in the group called for a rope. No one was arrested in the crime, something that made Booker more than a bit angry, especially since there were witnesses to the crime and video to back them up.

“There’s no reason that in the year 2020 that a group of White men should be able to accost anyone, let alone hold down a Black man, beat him and call for a noose. Not a rope — a noose,” he said.

Booker is right. There’s no reason for that.

But we have to remember it’s 2020, and as someone who hails from the home state of a vice president that has enabled a man  who has worn his racism on his sleeve like a badge for four years, Booker shouldn’t have been surprised.

Just like no one should have been surprised that three employees at a Jimmy John’s sandwich shop in suburban Atlanta made a noose out of bread dough on the Fourth of July and took turns putting it around each other’s necks.

And they definitely shouldn’t be surprised that in Trump’s America, playing with a noose made of dough was considered by some to be “edgy humor.”

But I’ll bet those three guys were surprised when they got fired later on that week.

And what was it about July 4 that brought out the noose maker in folks?

Oh, that’s easy. When you believe in American —- read White — exceptionalism, you can do whatever you want.

You can hold a fireworks display on a monument built on Native American land and give a speech that focuses on the preservation of flags and statues designed to intimidate people you believe to be less than.

You can cloak yourself in patriotism while you do it despite seeming to have a commitment to being as unpatriotic as possible.

Your supporters can tell the Native Americans protesting your presence on their land to “go back where they came from,” showing that American irony is the best irony.

And last but not least, you call for an apology from a Black race car driver because NASCAR decided that protecting a driver that was expanding the reach of their sport was more important than catering to the Good ‘Ole Boys that put you in office.

Because it appears that the 2020 presidential race is going to have a serious “Culture Wars Part II” component to it, and since President Trump seems laser focused on seeing the Confederate South rise again for some reason, we’re probably going to see more nooses as time goes on.

Let’s hope that the New Civil War ends the same way the old one did.

The Cultural Coach: Calling All Allies – This Is Your Moment