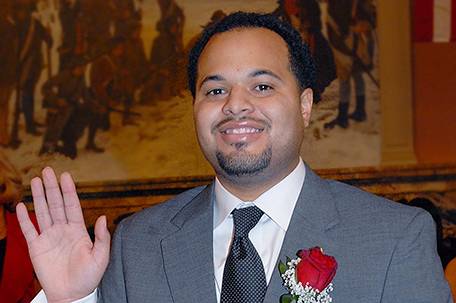 State Rep. J.P. Miranda wanted to help his sister with a job. Now both of them are facing jail time.

If you’re a State Legislator, you can hire anyone you want to staff your legislative offices…. unless they’re a relative.

Under the Pennsylvania Ethics Act, legislators are prohibited from directly supervising family members or participating in anything that can make money for a relative.

According to an indictment handed down this week, State Rep. J.P. Miranda allegedly didn’t think that applied to him. The first-term representative for the 197th Legislative district and his sister, Michelle Wilson, are facing charges of conflict of interest, conspiracy and perjury connected to a “ghost employee” who was used to funnel money from the legislator to his sister.

The brother-sister duo turned themselves in to police earlier this week and have been released on their own recognizance.

The charges represent a departure for the District Attorney’s Office when it comes to Philadelphia’s politicos, said Seth Williams, the current DA. For a long time, his office sent these types of cases to federal prosecutors or the state police, he said.

“I am proud of this office,” he said. “For a long time it appeared that these types of cases would not be investigated nor prosecuted, but that is no longer the case. We will no longer abdicate our responsibility to investigate and prosecute corruption to other authorities.”

The indictments were the culmination of an investigation that began with a report from Fox29 reporter Jeff Cole, District Attorney Seth Williams said. Cole had been tipped off to the comings and goings of Timothy Duckett, an employee of Rep. Miranda’s that was being paid $36,000 a year from the Commonwealth despite spending most of his working hour in an auto repair shop.

Once the story aired, a grand jury was impaneled and the investigation found that Duckett was being used as a way to pay Wilson for work she was doing in Rep. Miranda’s office. Duckett would receive the money via direct deposit like a regular paycheck, and then take the money to Wilson, who signed a ledger saying she got it, according to the Grand Jury’s findings.

When the news hit the streets on Monday, reactions ranged from “Miranda must have told the wrong person NO!” to “He’s an idiot!”

But no matter the reaction, the bottom line is that a public official entrusted by his community now stands accused of letting the community down, said Chad Dion Lassiter, an expert on race relations and President of Black Men at Penn, an organization connected to the University of Pennsylvania.

For communities already feeling let down by the system, taking a hit from one of their own adds insult to injury, Lassiter said.

“I think that the masses have always had a trust vs. mistrust relationship with their politicians,” he said. “They feel like they’re trying to placate them with a false generosity and that they don’t really see the suffering of the people in the communities they represent.”

When a politician of color finds his or herself in trouble, it’s more than just someone making a faux pas, Lassiter said. Because the community that votes him or her into office is a community filled with great needs, it’s not just an office you’re failing…it’s a mission.

“It’s a higher calling,” Lassiter said. “For politicians of color, it’s a moral imperative to do the people’s work. You have to provide an alternative.”

It’s also important to remember that there is a double standard in place in terms of what you can and can’t get away with Lassiter said. While former State Sen. Vince Fumo could commit a much greater offense in terms for public corruption and get a fairly easy sentence, city officials like former City Treasurer Corey Kemp and former Mayor of Detroit Kwame Kilpatrick get 10 years, or in the case of Kilpatrick, more than that.

“You can’t get caught up,” Lassiter said. “You have to make sure you’re engaged in the people’s work.”

As for Rep. Miranda, Pennsylvania Legislature rules don’t require him to step down unless he’s convicted of the offenses he’s charged with.

Rep. Miranda can also stick with his plans to run for re-election if he wishes, although the Philadelphia Daily News is reporting that most of the ward leaders in his district have endorsed someone else, social worker Leslie Acosta, for his seat. Others including Tomas Sanchez, husband of City Councilwoman Maria Quinonez-Sanchez are also considering a run for the seat.

At press time, attempts to reach Rep. Miranda at his district office and his office in Harrisburg were unsuccessful.