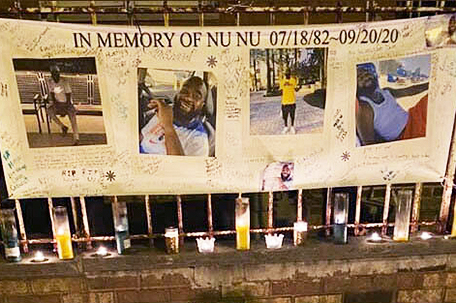 Displayed outside the home of David Wilkes, there are a bunch of teddy bears, balloons and candles that have been assembled in a street memorial that marks the death of his 38-year-old son Jermaine “NuNu” Wilkes. As the memorial keeps growing and growing, Wilkes says every time he walks out his front door, he is always reminded how special his son was in his life.

Wilkes —who is the proud founder of the Big and Beautiful Women pageant — finds it hard to believe his son’s killer is still on the run.

Before his death, Jermaine Wilkes was a person who was trying to turn his life around. He served three years in jail. When he came home from prison, Jermaine went to live with his girlfriend and his two children. He got a job at the Cheese Steak Factory in Center City, and earned enough money to support himself and his family. Then a few years later, he moved in with his father and helped him with his moving business.

Jermaine was saving money to buy a new house and start up his own moving business. Life was getting better for him. He was doing all the right things, and was doing great.

However, during the early morning hours of Sunday, September 20, around 1:45 a.m., Jermaine Wilkes was gunned down at a birthday party inside the Wheels of Soul motorcycle club, located on the 800 block of Princess Avenue in Camden, New Jersey.

According to Camden Police Public Relations Director Colby Gallagher, Camden County detectives are trying to locate and interview witnesses who were at the party. They want to know who actually pulled the trigger that killed both men at the club.

“That night, I was in the bed, I was just dozing off,” he said. “That’s when I heard my phone ring. His brother called me and said Jermaine might be dead. He said Jermaine was laying in the street. I couldn’t believe it. That’s when I jumped up and threw my stuff on. I jumped in my car and picked up my other son. We drove to Camden.”

Wilkes was told by a police officer to go back to the police station where a sergeant would be there to talk to him.

“The police lights are flashing and I pulled my car over,” Wilkes recalled. “A police car pulls up next to me. An officer tells me to go back to the police station and wait there in the lobby for the police sergeant. After I drove back to the police station, I sat in the lobby. I waited there for almost 30 minutes. That’s when two homicide detectives walked in the door. They sat down and told me my son was dead. When the detectives told me that, it felt like I was hit in the head with a sledge hammer.”

Today David Wilkes wants the person who murdered his son to be brought to justice. He said he’s thankful for the love and support that his neighbors have shown him since his son’s death. He says adults and children are still putting balloons and teddy bears at his son’s memorial outside his home, and that he appreciates their love for his son.