A Diamond in Cobbs Creek Park 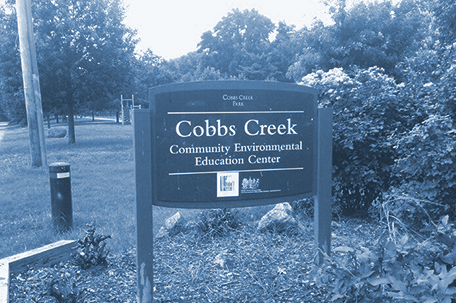 Maury Singleton, a member of the National Federation of Black Veterans Network and the Buffalo Soldiers, was a part of the Harvest Festival event. He spoke of the Cobbs Creek Environmental Education Center with pride. Singleton and his group use the facility and the grounds regularly to conduct an array of community programs and events.

“It has a bird sanctuary, a community garden, and land where people can go and camp out. They have walking trails. They have a nature trail alongside the creek.  They have a bridge that leads into the city of Yeadon. They have a science center upstairs in the building that’s complete with telescopes. I know the leadership for the Cobbs Creek Center is looking at starting a STEM program there for our youth and much more,” he said.

The Cobbs Creek Community Environmental Education Center (CCCEEC)—once was horse stables built in 1937 by the Works Project Administration for the park service. The stables were used as one of the Police Department’s Fairmount Park Unit, which was later abandoned. At some point, a man known as Brother Sensei, who was from the community, took responsibility for taking care of the horse stables. However, for many years, the area was unoccupied and uncared for. With neglect, the old horse stables became an eyesore in the neighborhood.

With a new purpose in 2002, the abandoned property has been transformed into a community educational and scientific center with classrooms, a laboratory, complete with science equipment, a garden, and community conference rooms.

The inspiration for the CCCEEC was ignited by Carole Williams Green’s work as a science teacher and resident of the area. During her years as an educator, the School District of Philadelphia did not offer environmental science courses to its students. Williams Green arranged trips around the city for her students to engage with earlier environmental places such as the Pennypack and Wissahickon Environmental Centers. After retiring, Williams Green used her students’ inquiry and their desire to learn more about science to motivate her to turn the abandoned stables in Cobbs Creek Park into an environmental center.

Upon retiring in 1991, Williams Green said she knew she still had much work to do in the education arena.  “Our children were going to places like Pennypack which was in the Northeast, or to Wissahickon, which is in Chestnut Hill, in order to have an environmental science experience,” she said, noting that at the time she was on the board of the Fairmount Park Commission’s Advisory Council.

With growing community concern about the stables, Williams Green asked members of the council, if any thought was given to having an environmental center in West Philadelphia. She was asked to prepare a proposal, which was submitted to the Fairmount Park Commission, on behalf of the Cobbs Creek community.

“After presenting my proposal, everyone at the table seemed to like the concept, but I was told, ‘We don’t have any money to do anything like that’,” recalled Williams Greene. “I was approached by Laura Sims, who asked if we could come up with something different and meaningful, “said Williams Green.

“We already had an ice-skating rink and a community center.  We didn’t need another recreation center kind of a building.  Several other people chimed in and said, whatever we do, can it be something educational. That’s when I first shared my vision for an environmental center with the community and the community said yes, we’d like to have that. That’s when we formed a community group and raise the money needed,” said Williams Green.

As it often happens when one makes a suggestion, they then find themselves as the one in charge.  That’s what happened to Williams Green. After meeting with various organizations to see who might be able to help them in our goal, she and Sims met to the Historical Society of Pennsylvania regarding the building itself, (the horse stables), because it is considered a historic building.  Williams Green commented, “A second proposal had to be written and then presented to the Historical Society of Pennsylvania and once members of that body saw the proposal, they agreed we could turn the horse stables into an environmental center”.

Along with longtime Cobbs Creek resident and community activist, Sims and William Green’s leveraged community support, networked with city and state officials, and private philanthropists to raise $2.7 million dollars to renovate the stables. Today the once abandoned horse stables is revived as the Cobbs Creek Community Environmental Education Center.

Each of these centers is located along Circuit Trails, or major connecting trails, and on waterways throughout the Delaware River Watershed in Delaware, New Jersey, and Pennsylvania. Through aligned communications, joint programming, and shared professional development the centers aim to build their capacity and increase their impact.

The Senior Environment Corps: Retired seniors come together a few times a month to test the water in the creek and also have public walks in the summer.  The center’s later partnership with the city’s Parks and Recreation allowed the center to add an environmental nature scene bike club.

The Cobbs Creek Gardening Club: The club was formed by women who wanted to use their gardening skills to give back to the community. Since their presence in 2019, they have contributed greatly to the beautification of the land surrounding the center.

Junior Docents: This longstanding program was one of the most successful programs in engaging young people in environmental science and community service. Junior docents conduct tours for visitors to Philadelphia and Cobbs Creek Park. This program was opened to students from public, parochial, private and charter schools.

Boys Scouts and Girls Scouts Program: The Scouts’ program allows young people to engage in community service through a “litter free” project. The scouts are mentored by the Buffalo Soldiers—who were the first care takers of the national parks.

Mike Weilbacher publically stated the following about Carole Green’s work in Cobbs Creek…“As a center based in a city, we’ve long recognized the disparity in neighborhood access to environmental education, it is because of Carole’s work…which opened nature’s doors to thousands of city residents.”