A Day of “Becoming” 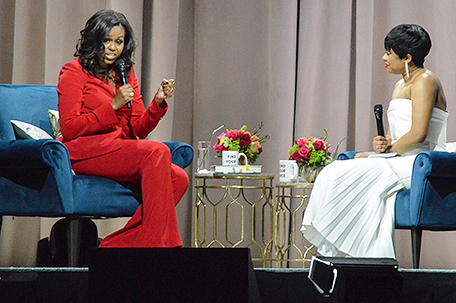 Before she took the stage at the Wells Fargo Center last Thursday night, former First Lady Michelle Obama had a stop to make.

Her former social secretary, Deesha Dyer, had started a new group in her native Philadelphia called BeGirl World. The purpose of the group is to encourage young Black girls to think globally and travel, something that Dyer said she didn’t see much during her tenure in the White House.

They were gathering at the African American Museum in Philadelphia.

So Obama stopped by to talk to them about why it’s important to expand their horizons, a lesson she had to learn herself.

“Transitions are really important,” she said. “You can’t let yourself miss things out of fear.”

Obama was in town touring behind her best-selling memoir, “Becoming”. In front of a packed house, Phoebe Robinson of the HBO Comedy show “2 Dope Queens” interviewed her about her childhood, life in the White House, and why she’s not interested in being the next President Obama. 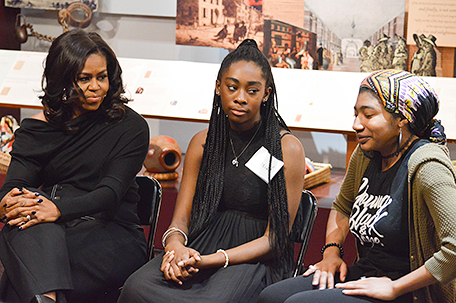 As a kid growing up in an extended family on Chicago’s South Side, Obama said she was surrounded by love and people who encouraged her to soar. But she was also in a neighborhood that had also learned what happens when “white flight” begins.

When real estate agents began telling White families to leave the integrated neighborhood that the Robinsons moved into in Chicago, she began noticing that the White friends she had grown up with weren’t in classes with her anymore, Obama said.

As a straight-A student from a nuclear family, this didn’t make a lot of sense.

“These families were fleeing from us,” Obama said. “Let’s just stop there, because we’ve got a lot of that going on now where people are making assumptions about who people are based on nationalities and skin color. The families who were told to be afraid of families like ours…it’s not the fact that this what it is, it’s what it says to the families that are feared.”

“It does something to kids like me who are getting straight As and playing with their dolls and their fathers are going to work…,” Obama continued. “The sheer presence of your existence frightens them away. They sell their homes and they move. And that’s a part of our history and we sort of have to remember that as we go through these times and we’re pointing out people who belong or don’t belong.”

Obama also talked about being a part of her husband’s political life. While it wasn’t her idea of fun, she created her own niche, she said. 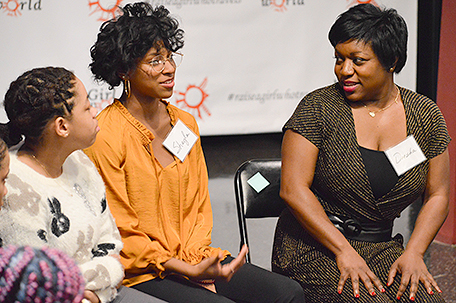 “I didn’t just want to be an appendage,” she said. “So I had to think outside the box.”

But being on the campaign trail brought with its own challenges. Thanks to media outlets that sought to portray her as a so-called “angry Black woman”, going into places like Iowa to campaign for her husband meant she had to convince people that she wasn’t what they saw on television, Obama said.

“People have a hard time hating you up close,” she said.

Naturally, with the 2020 elections coming up, Obama was asked about her own political future. She’s been brought up by more than a few people as a possible candidate for the office her husband used to hold.

She’s not interested, she says. Besides, a big part of the work that she and the former president are doing with the Obama Foundation is designed to blaze a trail.

“We want to leave a seat for the next generation,” she said.

“Becoming” is available at local bookstores.