A conversation with game changers in the new Civil Rights Era 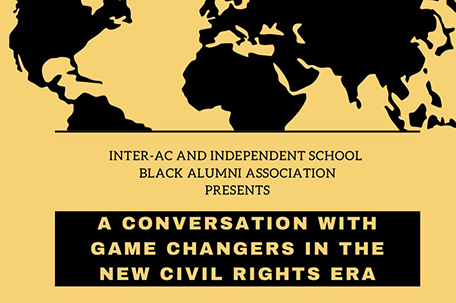 In 2020, the world shut down due to the pandemic. The lockdown lessened distractions and in turn, opened the eyes of many to the ugly realities of Black people’s daily experiences in America. In addition to the devastation of the global pandemic, which according to the CDC Black people are experiencing at a much higher rate, there has been a constant stream of harassment, abuse and murder of Black men, women and children by the police. Despite the fact that these egregious acts of, brutality are often caught on camera, it seems as if justice is rarely served. It’s rare that police are fired, and it is rarer still that they are prosecuted.

Despite the increase of protests happening all over the world — led largely by the Black Lives Matter movement — our demands for justice have fallen on deaf ears, with empty promises for “additional police training.” The repeated cycle of trauma that we are exposed to requires healing.

One of the organizations seeking to promote and facilitate that healing is the Inter-AC and Independent School Black Alumni Association (IISBAA). On April 28, IISBAA hosted the first panel discussion of their annual panel series entitled, “A Conversation with Game Changers in The New Civil Rights Era.”

The conversation began with an honest question about how everyone was feeling.

“Like everyone else I’m exhausted — honestly, I feel like all Black people are exhausted right now,” Dunbar said. “But in addition to that exhaustion, I’m somewhat optimistic. I’m optimistic because of the power that I’ve seen harnessed by young people in particular in this nation. I sort of know that the baton has been passed to the next generation.”

“I am nervous about both the level of endurance that I have and we collectively have to continue going,” Gould added. “At the same time, I’m nervous that as we go forward and the world opens back up and we have all the distractions — and not just we, but the broader world and allies, how much this commitment is going to be sustained. So, I’m cautiously optimistic.”

With the weight of uncertainty and the constant fear of our demise looming, the panelists shared what motivates them to keep going.

“There’s an interesting thing happening, at least on the entertainment side, where I won’t say that the floodgates have opened, but the floodgates are cracked,” Dillard said. “There are a lot of Black stories that are able to be told right now.We’re finding a lot more of our stories are being pushed through for a variety of reasons, but at the end of the day, when you see press release after press release with a Black face and Black creator leading these various projects, it definitely puts wind in my sails.”

“My experience and my story going through Google is something that I hope nobody has to go through,” Ramsey added. “It was overall pretty positive, but there were definitely challenges, and so what motivates me is that I’m making sure that I’m true to my mission and I’m highlighting underrepresented voices.That motivates me to continue to push on, continue to share my story, continue to highlight unheard voices and amplify them on larger stages, so we can continue to create an easier pathway.”

Following the reckoning of 2020, Dixon presented the question of whether we are currently living in a new civil rights era.

“As a historian, I’m the worst person to ask, ‘is this new?’, because I’m going to tell you ‘no’,” Dunbar said. “Black people have been fighting forever. We’ve been fighting since the 17th century, since people have been living in what they eventually called home in mainland North America. I will say that as a historian, we see sort of moments, peaks of engagement, of resistance… and clearly we saw that in this sort of watershed moment of the 50’s and 60’s. We think about the Civil Rights Movement and legislation that was passed that changed the ways Black people lived in this nation. I would argue that it really hasn’t been since that movement that we’ve seen a sustained attack against anti-Black bias and racism. What I see now is the Black Lives Matter movement breathing new life in this call for humanity… the call for respect for Black life.”

As we continue the push towards both change and accountability, panel discussions like this one, that address the multitude of experiences of Black people from a place of honesty are essential. Implementing change requires clearly defining the necessary steps that we need to put in place for a shift in the matrix. Thankfully, organizations like IISBAA are aiding in the charge. What do we need to put in place to cultivate and sustain a climate for meaningful change? With discussions like this that are ongoing and the acknowledgment that all of the structures that uphold systematic racism must be dismantled… there is still hope for a better future.

IISBAA, founded in 2019, has members from 14 independent schools in Philadelphia and surrounding areas. Their mission is to build community among Black alumni while acting as advocates for alumni and their families. To learn more about IISBAA visit: www.IISBAA.com.