A Conversation with Chekemma J. Fulmore-Townsend, President and CEO of the Philadelphia Youth Network 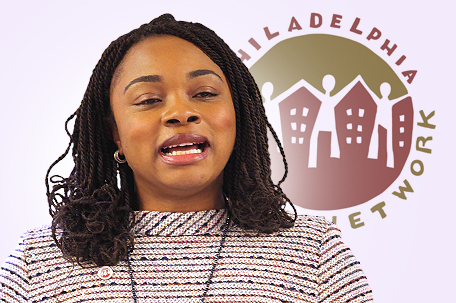 According to a study from the Pew Charitable Trust, Philadelphia’s 25.7 percent poverty rate is the highest among the nation’s 10 largest cities.

The Philadelphia Youth Network (PYN) has been addressing Philadelphia’s intergenerational poverty issues through programs and other interventions since 1999. It was first incorporated as a non-profit organization housed within the School District of Philadelphia as a local response to the Workforce Investment Act of 1998. In this capacity, PYN developed “School-to-Career” programming that made connections between education and career success.

Since 1999, the organization has secured more than $500 million from public and private donors and managed over 200 contracts with their community-based organization partners, providing high-level opportunities for more than 160,000 young Philadelphians.

At the head of this comprehensive organization is its young, dynamic president and CEO, Chekemma J. Fulmore-Townsend.

Fulmore- Townsend — who holds a BA in psychology and an MA in social work from the University of Pennsylvania — served in various capacities at PYN before being appointed to her current position. Prior to working at PYN, she served as the senior director of the Emerging Workforce program at the Philadelphia Workforce Development Corporation.

SUN: Thank you for taking time to speak with us today. 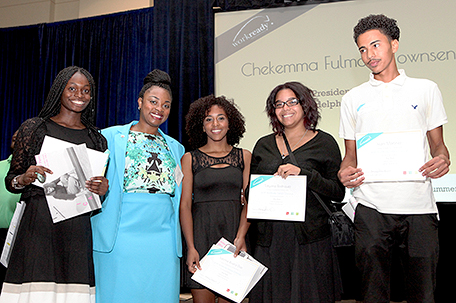 Ms. Fulmore-Townsend with a few of the 400 youths who gathered at the Pennsylvania Convention Center for the 2015 WorkReady Philadelphia Expo. The youths participated in the six-week internship program which showcased their various achievements through a presentation of projects and portfolios, and participated in workshops to further develop skills in networking and job readiness.

SUN: Much time, talent and money has been invested in PYN’s “20-20 Vision” strategic plan since its launch last summer, which began with three successful pilot programs. This year, you’ve introduced three more; can you tell us a little bit about these programs and their goals?

CFT: When we released “20-20 Vision,” we set some very bold goals that were new for our organization, because we were very excited about the opportunity to create greater impact. Part of our path to creating greater impact is that we sort of decided that we were going to do three things.

So, we felt like in order to really help our city climb out of poverty, in order to bridge services across systems, we [needed to discover] how do we unite that energy and common goals so that young people are productive as they move forward from where they are.

That is what really led us to the system builder work that we decided to do, which we were always doing, but we’re putting a different frame on it. When we looked at what we had, we said ‘wow — we’ve really got a complimentary suite of services, and they’re doing the best that they can, and even with that, we see problems.’

We launched a couple [of pilot programs]. When we looked at our post- secondary[school] bridging work …we learned so much from that process. The rapid testing, the assessment, the revising, the putting it back out into the universe — we learned a lot.

When we looked at our outcomes for young people who were in non-traditional educational experiences, they were going off to college or work, but they weren’t staying there. [I thought] maybe we were part of the problem and not the solution.

What was happening we that we had a program that was designed to look at the secondary credential, the high school credential — whether that was a GED or high school diploma — [like] that was the end game. Everything about that program was designed to get them to that point. Then we clapped, we celebrated, we cheered them on and helped them make a choice about the next step.

Some chose college. Some chose work. But we didn’t do enough work to make sure that they stayed in the next step successfully, and we felt responsible for that. So we [wondered] if we created a bridge, if we created some specific supports to help not just get there but succeed while they’re there, would that change the outcome?

It did so much more than just change the outcome. One of the biggest successes we’ve had is that we’re changing the conversation about what’s possible for young people…in every innovation, we’re trying to take assumptions and turn them on their head.

[This year] we have Entrepreneurship coming up, which will be really exciting for us to explore, and a whole host of others.

We saw it as an opportunity to finally solve a problem that people don’t realize…that is, ‘how does the puzzle fit together? How do we do it in a way that anybody who is a stakeholder will understand?’ That led us to what we recently published on our website — our Career Development framework.

Establishing our Career Development framework gave us a unifying force. That force will now play out in a couple of ways — service delivery, program design, assessment, evaluation, continuous improvement and technical assistance. Everybody is different…we could see this diversity as a challenge, or we could say, ‘wow — this is the most exciting part of it, because we get to develop as many solutions as there are opportunities, or as there are young people.’

We work with community-based organizations, but we also work with Child Welfare. I work with Family Court. I work with the city government. I work with employers. We’re fortunate to have very authentic, productive relationships with system leaders everywhere.

Philadelphia youth network president/CEO Chekemma J. Fulmore-Townsend on the panel of the Champions of Change at the White House.

SUN: What criteria do potential program applicants have to meet to be considered for this year’s programs?

You should be able to prove eligibility to work, be able to produce the documentation so that taxes can be taken out, proof of ID and age or your I-9 document. You have to complete the W-4.

Then we have investors that are specifically interested in something. When we work with the Department of Human Services, they have some responsibilities associated with the resources that they receive. So we have to align with those things in order to provide those workforce experiences.

Something else that is also a requirement is having your working papers; that’s federal law. We have to follow federal law for a whole lot of things, like [monitoring] wage rates and making sure that [the young people] are in safe environments. We review all of these places before they even show up to make sure that they are compliant, because we don’t want to send any young person to a place that is not compliant.

SUN: So it’s a lesson about follow through for the program participants.

CFT: Yes, and about completion and preparation.

SUN: Is all that laid out in the application process? Are the young people given assistance with that?

CFT: Yes. Our partnership with community-based organizations is all about assisting young people through that process. Our role is to know the process and make it as easy as possible to create one system for as many people to use as we can, and teach them how to do it. [The organizational partner’s] role is to do it with fidelity and support the young people in achieving that goal. They need the adult navigation….They need to know that anywhere you work in the United States, that this is going to be required of you. [If] you can produce it for us, you can produce it for any employer that wants it.

Part two of the SUN’s interview with Chekemma J. Fulmore-Townsend of PYN in next week’s issue of the SUN.