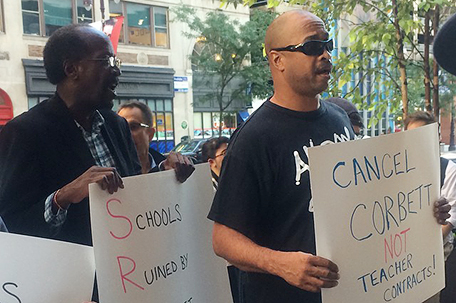 ABOVE PHOTO:  (Photo by Denise Clay)

When the School Reform Commission cancelled its contract with the Philadelphia Federation of Teachers on Monday, an already contentious relationship got much worse.

Wednesday was supposed to be a half-day off for students in the School District of Philadelphia.

But for students at the Creative and Performing Arts High School in South Philadelphia, that half-day of class became a half-day of protest due to the School Reform Commission’s decision to cancel its contract with the district’s teachers.

While he understood the SRC’s reasoning for the move, which was to bring more resources to the schools, students like Cy Wolfe, a junior at CAPA, believe that the cancellation of the contract shows that the district doesn’t respect its most important resource.

“I don’t care if my school has textbooks or paper,” he said. “If I don’t have a good teacher, how can I learn?”

While this move had been threatened before during contract negotiations with the teachers, this is the first time that the so-called “nuclear option” was used. The district went to the Pennsylvania Supreme Court to ask for permission to do it, but was denied. It is currently in Commonwealth Court asking for the same permission.

SRC Chair Bill Green said that the district’s inability to get contract concessions from teachers in areas such as health insurance, class size and building requirements made the action necessary.

“Philadelphia families have made extraordinary sacrifices: students come to school every day in buildings that lack critical resources necessary for teaching and learning,” Green said. “Bringing PFT health benefits in line with those received by other District, city and state employees will drive tens of millions to our classrooms.”

Mayor Michael Nutter and Gov. Tom Corbett applauded the SRC’s decision, although Nutter said it wasn’t one of the district’s “finer moments”.

“The SRC did one of the few things left for it to do in order to get desperately needed services back into our schools. They asked their teachers and counselors and others in PFT to contribute to their healthcare,” Nutter said. “Principals and janitors alike have taken pay cuts over the last two years. They have already agreed to similar health care benefit changes. I support this and hope others can see it for what it is – another consequence of this horrible situation our schools have had to face year after year.”

(The SRC’s move) will effectively close the funding gap and provide the district with the ability to hire new teachers, counselors and nurses, and secure education resources that will benefit the students of Philadelphia,” Corbett said in a statement.

District officials say that cancelling the contract will free up $43.8 million that would have otherwise gone toward the teacher’s healthcare benefits. Beginning Dec. 15, teachers will be required to pay anywhere from $21 to $71 toward their benefits per pay period.

The district’s allocation to the PFT’s Health and Welfare fund, the fund from which benefits for retired teachers are paid, was also cancelled.

According to district officials, Act 46, the law that created the School Reform Commission in 2001, allows them to take drastic measures such as cancelling a contract if the district is “in distress”.

At a news conference held at the PFT offices on Monday, Jordan said that the union would fight it by any means necessary.

“It’s one thing to negotiate,” Jordan said. “It’s another thing to have things imposed on us. We’ll be meeting with our members soon and nothing is off the table.”

He also decried the way that the SRC made its decision.

“The way they did this was cowardly and underhanded,” Jordan said. “They did something dirty and they tried to make it clean.”

It has also lessened the ability of both sides to work together on behalf of the district’s children, said Patrick Eiding, president of the Philadelphia AFL-CIO.

“The School District needs the collective dedication, wisdom, and input of all of its employees to solve the problems caused by Governor Corbett and the SRC,” Eiding said in a statement. “The best way to encourage that dedication, and get that wisdom and input, is through bargaining in good faith with the teachers’ elected representatives. Where I come from, what the SRC did today is a destruction of collective bargaining.”

The AFL-CIO is prepared to stand by the teachers in any action they choose to take in response to the SRC’s decision, Eiding said.

Many parents felt the same way, but they weren’t as angry with the SRC as they were with Gov. Corbett. A group led by the Pennsylvania Working Families and Action United protested in front of Corbett’s office in the Bellvue chanting “One Term Tom” and “Tax the Shale, Not The Teachers!”

“We’re at Gov. Corbett’s office today to make sure that the blame for today’s SRC action is properly laid at his feet,” said Kati Sipp, an organizer for Pennsylvania Working Families.

In a statement, Democratic gubernatorial candidate Tom Wolf put the blame at Corbett’s feet as well, saying that the governor’s $1 billion in education cuts have exacerbated the problems of the School District of Philadelphia, a district that’s been under state control since 2001.

It’s time that the Commonwealth recognizes that the way that schools are funded in Pennsylvania isn’t working and hasn’t for a while, Wolf said.

“Under Gov. Corbett, 27,000 educators have been laid off, property taxes have skyrocketed, class sizes have increased and valuable programs have been eliminated across the state,” Wolf said. “It’s simply unacceptable.”

No date has been set for the hearings connected to the contract cancellation.