A college plants a garden, and a healthy learning community 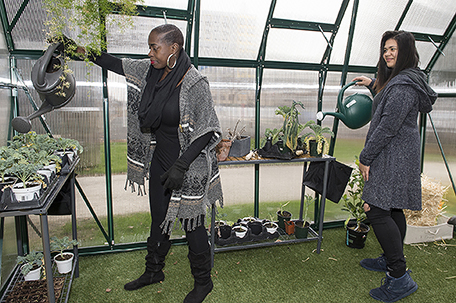 ABOVE PHOTO:  Jenavia Weaver, at left, coordinator for the Center for Student Leadership waters the plants, while student Monica Murray looks on, at far right.

Jenavia Weaver, coordinator for the Community College of Philadelphia’s Center for Student Leadership, did not hesitate to speak up when she observed food-insecure college students getting meals from a pantry stocked with packaged and processed foods.

“We can do better. We can offer healthier food options and teach our students a self-sustainable skill”, she said.

With this premise in mind, Weaver, along with a small group of faculty and staff, set out on a mission to establish a community greenhouse on the College’s Main Campus to provide an opportunity for students to learn how to grow and supply healthy food alternatives for themselves and the city.

“I could not continue to give a high sodium diet to students… and codify dependency. High sodium and dependency is not something I want to teach [students],” said Weaver.

The new community greenhouse is called Grady’s Garden, affectionately named after a resident groundhog that has made the greenhouse area his home. Volunteers leave food for Grady so the groundhog does not sneak inside to disturb the plants.

“The garden is a living classroom for life,” Weaver explained. Even before it took root, a new, student-led Horticulture Club sprouted with volunteers ready to lead, weed and tend to the plant beds. In addition, some faculty joined in the mission by blending lessons on community gardens, food access and sustainability into presentations and classroom discussions.

The first harvests from the garden will come in December. The first bunches of fresh kale will be distributed in a food giveaway from noon to 2 p.m. on Dec. 12 and Dec. 13 at Grady Gardens. Since the kale seedlings are still growing, the College bought mature, fresh kale bunches to use in the giveaway to students seeking a nutritional snack or side dish.

Students at many of the nation’s community colleges are dealing with a basic lack of needs, according to a groundbreaking 2017 report released by the Wisconsin HOPE Lab and the Association of Community College Trustees.

Researchers for  “Hungry and Homeless in College” surveyed more than 33,000 students at 70 two-year institutions, including Community College of Philadelphia, and found that two-thirds struggle with food insecurity, half are housing-insecure, one-third are regularly hungry and 14 percent are homeless.

“These students do have financial aid and they are working and they’re still not able to make ends meet. It’s not like they’re lazy or sleeping a lot of the time.… What we see is a portrait of a group of people who are trying hard and still falling short,” said Sara Goldrick-Rab, a professor of higher education policy and sociology at Temple University and the founder of the Wisconsin HOPE Lab, which more recently evolved to the Hope Center for College, Community and Justice, and aims to document modern academic challenges and advocate for institutional progress based on data.

The College is expanding food resources and services to students and giving employees an opportunity to donate to the food pantry or Snack Rack through payroll deduction. This fall, the College hosted Food Day on Main Campus, which included culinary demonstrations and exhibits, wellness tips, sustainability strategies and promotion of community resources for those students and families who are food-insecure.

“Working collaboratively with so many talented people to put Food Day together was incredibly uplifting and inspiring,” said Paula Umaña, one of the organizers. “But when you see students coming out of cooking classes, thrilled to try the easy and affordable recipes that Chef Andy put together, and you see them interview nutritionists for their class project, and volunteer for the garden, or schedule an appointment to apply for SNAP (Supplemental Nutrition Assistance Program) at Single Stop, that is when you know we accomplished our mission.”

Efforts to address hunger are part of the College’s broader effort to engage students in formulating responses to community challenges. The College operates Snack Rack at 16 campus locations, a private space where students can request and receive between-meal snacks of microwavable items and other quick bites.

The College’s Food Pantry recently received support from the William King Charitable Foundation with a donation of $10,000, the Leo and Peggy Pierce Family Foundation with a $5,000 gift and the Wawa Foundation, which donated $1,500. A portion of the King grant will support the garden.

Top 2012 garden and lifestyle trends: cultivate the new good life with the power of plants