A century of excellence: The work and legacy of Rev. Leon Sullivan lives on 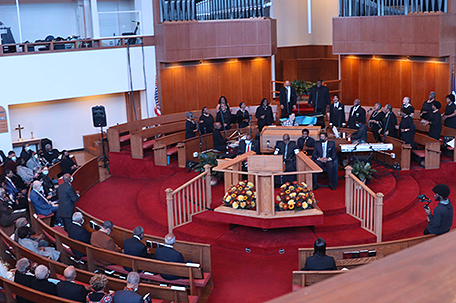 One hundred years ago on October 16, many from Philadelphia would say a very special person was born. That would be Leon H. Sullivan, who years later went on to become an ordained minister and the pastor of one of Philadelphia’s long-standing  African American churches, Zion Baptist Church, which is located at Broad and Venango in North Philadelphia.

Aside from being the shepherd  of Zion Baptist Church for three decades up until his passing in 2001 at the age of 78, there are so many other accomplishments achieved by the man who came to be known as “the Lion of Zion.”

On Sunday, October 16, 2022, Zion Baptist Church was packed for both its 10:00 a.m. service and a special 4:00 p.m. service marking the centennial anniversary of Sullivan’s birthday.

“This has been a special month — the month of his 100th birthday, had he lived to see it,” said Ronald Harper, Esq., chairman of ZIon’s board of trustees, of his longtime mentor and friend. “Mayor Jim Kenney declared the month of October as Rev. Dr. Leon H. Sullivan Month.”

In addition, the Philadelphia International Arrivals Hall has now officially been named after Sullivan.

Sullivan’s legacy was also celebrated with a three-hour, live broadcast on WURD Radio, where some twenty people who worked with him or who benefitted from his work shared their knowledge about Sullivan, and how he impacted their lives.

It’s been an absolutely fantastic month, and I like to always say that Rev. Sullivan fast-forwarded the Civil Rights Movement and reenergized it in the process,” Harper said. “How he got all the things he accomplished might be a mystery to some people, but I’ll tell you this: Rev. Sullivan did all of his work selflessly. I think it was the kind of sincere passion that he displayed, that made people gravitate toward him, wanting to help. Rev.Sullivan learned from his mentors and proceeded to compliment their work.”

“The icon of his work was the selective patronage program,  the Global Sullivan Principles, the ending of apartheid in South Africa, and going on the board of directors for General Motors and not being quiet while there,” Harper continued. “He was not concerned about how he might benefit from being there. Therefore he was able to project the needs of the people, and he did that vigorously and patiently.”

Rev. Dr. Wilson Goode, former Philadelphia mayor,  first learned about Sullivan when he was a student at Morgan State University.

“It was around 1960, whenever the Selective Patronage took place,” Goode recalled. “At the time, we were picketing at a nearby shopping center. Part of my task was to do a report on what was happening in Philadelphia, since I had grown up in Philadelphia. I did a report on selective patronage and followed the principles that Dr. Sullivan had laid out. I changed a part of his message just a little bit. I came up with “Don’t Buy Where You Can’t Work.”

He said that learning from Rev. Leon Sullivan long ago helped motivate him to serve as a Civil Rights Movement leader and ultimately become Philadelphia’s first Black mayor.

At the time when Goode first ran for mayor, Sullivan was registered as an Independent.

“He invited me to his church on a Sunday morning early on in my campaign,” Goode said. “ Dr. Sullivan stood in his pulpit and said he was ripping up his Independent registration card and said, ‘I’m changing my registration to Democrat so I can vote for Wilson Goode.’”

Years later, after serving two terms as mayor, Goode served on what now is known as the Sullivan Trust, as secretary-treasurer for a number of years.

“Rev. Leon Sullivan, in my view, other than Dr. King, was the most influential and powerful pastor of any church in America [who] went on to demonstrate what extending the church beyond the walls of the building can do,” he said.

“Being at Zion Baptist Church on Sunday, October 16 for both services as we observed the centennial anniversary of Rev. Sullivan’s birth was a homecoming for me,” said Patricia Clifford, a well-known known journalist in Philadelphia. “I was baptized by Rev. Sullivan at Zion when I was a little girl. It’s so good to be back home, and to see that his work and legacy live on.”

Mable Welborne, chair of the Leon H. Sullivan Charitable Trust — someone who first met Dr. Sullivan in 1966 when she accepted a job with OIC — said that from that first meeting until the day of his passing, she was always a dedicated supporter, friend and church member.

It was always her desire to make significant contributions to OIC and to all the work Rev. Sullivan was engaged in, she said.

“In 1981, Rev. Sullivan called me to come be on his board of directors for what was then called the Zion Nonprofit Charitable Trust,” Welborne recalled. “I said yes,  and in 2001, I became the chair of the board after the death of Hillary Holloway.”

According to Welborne, over this year of observing Sullivan’s legacy, the trust will focus on educating the younger generations on the Sullivan Principles and his philosophy of self-help and economic emancipation.

I know there’s also a lot of time being invested in the Zion Baptist Church Annex at Broad and Venango. There will be a lot of upscale educational empowerment at the annex location.

Meanwhile, the Leon Sullivan Trust at the Human Services Center will also be focusing on education. There’s been some demand to have the Sullivan Principles included in the curriculum for Philadelphia public schools.

OIC of America affiliates convene in Philadelphia for multi-day reunion and celebration of the legacy of founder, Rev. Dr. Leon H. Sullivan