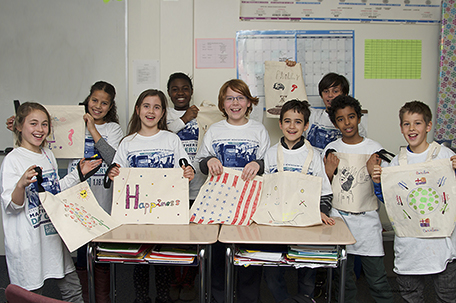 From volunteer projects to awards luncheons, people all over the Philadelphia area took time to remember the legacy of the Rev. Dr. Martin Luther King Jr. Monday.

Because of his determination to make sure that America lived up to the promises of the Constitution by providing equal rights to all, the Rev. Dr. Martin Luther King Jr. was an important figure in American history.

“I’ve written about Dr. King’s ‘I Have A Dream’ speech,” he said. “We’ve followed the life of Dr. King. What he did had an impact on us.”

“They wanted to learn more about what we’re doing and how we’re breaking down barriers,” Bernstein said.

This year’s Day of Service focused on Rosa Parks and the Montgomery Bus Boycott. In addition to the many projects taking place at Girard College, projects that included sorting business clothes for The Career Wardrobe and Ready, Willing and Able, and painting a mural commemorating the Bus Boycott, the King Day of Service included a job and opportunity fair.

Since King died while mobilizing a poor people’s campaign designed to bring attention to the plight of the economically disadvantaged, including ways to help those in need of economic opportunities find them made perfect sense, Bernstein said.

While the Day of Service at Girard College was the largest activity in celebration of King’s birthday, it wasn’t the only one. The Black Clergy of Philadelphia and the Philadelphia NAACP held a King Day event at Bright Hope Baptist Church. The keynote speaker for this event was Jonathan Jackson, national spokesperson for Operation PUSH and the son of the Rev. Jesse Jackson, one of Dr. King’s contemporaries.

Former City Councilwoman Marian Tasco and District Council 33 President Pete Matthews were honored for their contributions to the community as Drum Majors at the annual Martin Luther King Center luncheon. The luncheon, which is a fundraiser for the only other King Center in the country authorized by the King Family, is an event that contributes to the programs the King Center does here in Philadelphia.