A Budget For The Least Of These 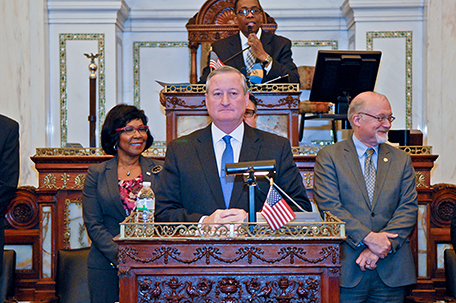 Mayor Jim Kenney is a graduate of the St. Joseph’s Preparatory School in North Philadelphia, an all-boys Jesuit school that, among other things, teaches it’s students that they are responsible to take what they’ve learned there and apply it to the service of others.

On Thursday, Mayor Kenney came to City Council chambers to present a budget that indicates that he paid attention in class.

The $4.4 billion budget plan includes a number of things designed to help Philadelphia lose its ranking as one of the nation’s most impoverished cities by working on some of the city’s most intractable problems, problems that have kept the city from being all that it can be, Kenney said.

“Currently, of the top 10 major U.S. cities, Philadelphia ranks first in poverty and last in job creation,” he said. “We will only reverse these rankings when we provide all our residents with the basic tools they need to be employable and when we create family-sustaining jobs to employ them.”

Toward that end, Kenney touted the Pre-K/Neighborhood Schools program. The program, which is funded through the Sweetened Beverage Tax, has led to 2,000 free, quality pre-K seats, and nine community schools that are serving 4,500 students. It’s also enabled 88 pre-K providers, most of them from traditionally marginalized communities, to create 250 new jobs, he said.

He also proposed $1.9 million in funds to fight a burgeoning opioid crisis that led to 900 overdose deaths in the city last year, more than $1 million to combat homelessness in the form of rapid re-housing and supportive housing funds, and $900,000 to combat lead poisoning, because, Kenney said, you can’t take advantage of the opportunities the city wants to create without dealing with them.

Many of these opportunities could come in the form of the Rebuild Philadelphia program, which Kenney kicked off by introducing an ordinance that would allow his administration to buy the bonds needed to finance the $500 million rehab of the city’s parks, recreation centers and libraries.

He also proposed $90 million over the next six years to put a cap over I-95 that would connect Penn’s Landing to Center City and turn the city’s waterfront into an economic hub.

Council members were pleased with what they heard.

“This budget addresses the needs of the most vulnerable in Philadelphia,” Councilwoman Cindy Bass said. “It lets them know that they won’t be forgotten.”

“We’ve been working on lead [poisoning] for years,” said Councilwoman Blondell Reynolds Brown. “We passed a major measure, but there was no money. Now, the Mayor has made a major commitment in the form of $900,000.”

But while Council members were prepared to give the budget a hearing and liked much of what it contained, the uncertainty caused by a lawsuit filed against the beverage tax by soft drink distributors, and threats made by the Trump Administration and in Harrisburg to withhold money from cities that refuse to assist Immigration and Customs Enforcement agents in apprehending the undocumented loomed overhead.

While he didn’t come out and say what Council would do in the event that either the Commonwealth or the President made good on their promises, Council President Darrell Clarke admitted that it was a concern. 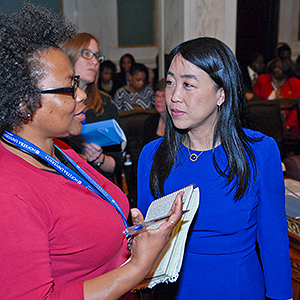 “I won’t necessarily say that there’s not a Plan B,” Clarke said. “Contingencies are being discussed, and we will be working diligently if these things occur from both a legal and a political perspective. We’re hoping that Washington and Harrisburg realize that continuing to dump on municipalities is not the way to go because we are the economic engines of our country.”

As for the Sweetened Beverage Tax, protestors from Pepsi were outside of City Hall calling on Council to repeal it. Despite it’s only being in place for a month, Pepsi announced that it would be laying off 100 Philadelphia-area workers, citing the financial hit they’re taking from it as a cause.

While Council President Clarke sympathized with the plight of these workers, repeal is unlikely, he said.

“I see no interest in that whatsoever,” he said. “The members have faced union pressure for the past year, but [the tax] passed. We’re moving forward.”

Council will be begin budget hearings later this month. For more information, go to PHLCouncil.com.

ACT UP protests budget speech, demands funding for homes for people with AIDS